Vasavadatta The popular Story as told in Buddhist Lore 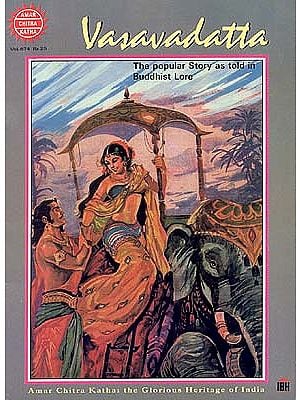 $5.20$6.50  [ 20% off ]
Notify me when this item is available
Save to Wishlist Send as E-card Share by Email
The story of King Udayana and Princess Vasavadatta was very well known in ancient India. Early writers were inspired by this story and made it the subject of poems and dramas. Bhasa wrote the 'Swapnavasavadatta' in Sanskrit, which is unique for its literary value. 'Vasavadatta' by Subandhu is another great work on the same theme.

This popular story was re-echoed in Pali and Prakrit literature. In Dhamma-pada-atthakatha (5th century A. D.), on which this illustrated classic is based, we get an elaborate account of the story of Vasavadatta and Udayana.

King Pradyota of Ujjaini is disturbed to learn from his minister that Udayana of Kaushambi is a greater king than he is. He tricks Udayana into 'captivity. But his daughter Vasavadatta and Udayana fall in love. How Udayana escapes with Vasavadatta is told in pictures in the following pages.