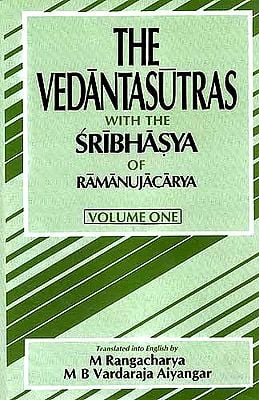 The Vedantasutras with the Sribhasya of Ramanujacarya: Set of 3 Volumes (An Old and Rare Book)

The present work Sribhasya, is the commentary on the Vedantasutras by Sri Ramanujacarya. Ramanuja wrote the commentary in a context which necessitated not merely the exposition of the tradition he represented, but also the refutations of the viewpoints of other philosophers like Sri Samkara, Bhaskara and Yadava.

The Sribhasya has a total of 157 adhikaranas with numerous aphorisms. The present volume contains 11 adhikaranas in which Ramanuja enters with penetrating insight into the detailed study of the Vedantasutras.

According to him, the Supreme Brahman "the Highest person is the creator, sustainer and destroyer of the universe, and he is distinct from matter the soul."

It is his view that God is omniscient and omnipotent and who is wholly pure and full of all auspicious qualities. Ramanuja successfully explains the above viewpoints with his authentic exposition and interpretation of the Upanisads. The analytical outline given in the book lucidly explains all these aspects in the present volume.

M. Rangacharya (b. 1861) was Professor of Sanskrit and Comparative Philosophy at Presidency College, Madras. He wrote a number of books out of which translation of Sribhasya of Ramanujacarya in English and The Hindu Philosophy of conduct being Lectures on the Bhagavadgita (3 vols.), stand out foremost. He passed away in 1916.

Sribhasya of Ramanuja translated into English by Professor Rangacarya comprises three volumes, of which the first was first published by late Professor N. Rangacarya himself, but he could illustrious son late M.R. Sampatkumaran himself a scholar brought the remaining two volumes in 1964 and 1965. He created a trust in the year 1966 in the name of his revered father called Professor Rangacharya Memorial Trust with the main object of bringing out books on Ramanuja's philosophy and to propagate his teachings. With this aim in view, the Trust has brought out a number of books in a humble way.

The present work Sribhasya is always preferred by the scholars as it deals with the views of Ramanujacarya and it implications there on. It is always in great demand, the book was out of print for a long time.

The other two volumes will also be available shortly. Out thanks, are due to Sri M.C. Krishnan, cousin of the founder of the Trust, who is the guiding spirit, for this successful venture.