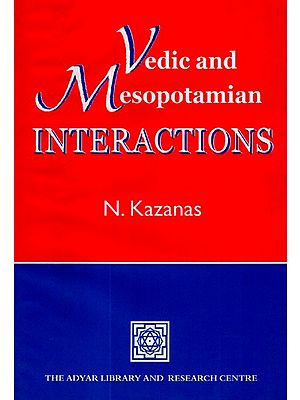 $20.00
Notify me when this item is available
Save to Wishlist Send as E-card Share by Email
Preface
The startling discovery (around 1785) of Sir William Jones was that a number of languages like Sanskrit, Greek, Latin, Gothic, Celtic, Old German, Persian, etc. have a common origin; they are daughters of one ancient mother language. As a result of this unique discovery there arose the wonderful science of Comparative Philology. To this mother language mod-ern scholars gave the name Indo-European/ Indo-Germanic. Specialists of this science sought, on consideration of the distribution of the daughter languages, to locate the homeland of the Indo-European speaking people outside India, most probably in Europe. After examining and rejecting many hypotheses, the philologists came to near unanimity in fixing the cradle land of the Indo-Europeans in South Russia, Central Asia.

It was held that one branch of Indo-Europeans must have left this homeland around 2000 BC, migrated via Asia minor, Mesopotamia (i.e. the tract between the two rivers Tigris and Euphrates; a larger part of it is the present Iraq), Iran and Baluchistan, and settled down in the land of Seven Rivers (saptasindhu). Here they composed their earliest work called Rgveda. Scholars have suggested many dates for the composition of this work, namely 1000 BC, 1200 BC, 1500 BC, 2500 BC, 3000 BC, 4000 BC, etc. However the date 1500-1000 BC/1200-1000 BC, as proposed by Max Muller (the acclaimed founder of the science of Indo-European comparative philology) and Macdonell, has been accepted as the probable date of the composition of the Rgveda. The ramifications of this thesis had been many, far-reaching and ugly too.

In the meanwhile, during the 1920's, archaeologists discovered an ancient, unique, urban civilization on the banks of the Indus river in the Punjab-Sind region. They called it Indus civilization and opined that the same originated around 3000 BC, flourished astonishingly for about 1500 years, and came to ruin around 1500 BC, suddenly for reasons not conceivable easily. Now archaeologists and historians found this date 1500 BC of the disappearance of Indus civilization coinciding with 1500 BC, the assumed date for the Vedic Aryans' migration to the Indus valley. Hence they asserted that the Indus civilization was pre-Aryan and non-Aryan and with the glee of having discovered the much saught-after cause, they started charging the so-called Vedic Aryans with the crime of ruthlessly destroying the earlier wonderful urban civilization on the banks of the Indus. The earlier theory of 'Aryan migration' came to be reassessed and branded as the theory of 'Aryan invasion of India'. The UNESCO History of Civilizations (1949-50) painted, without demur, in black colour the authors of the Rgveda ac the worst type of barbarians of ancient times. All these observations were made simply depending on one basic assumption of the date of the Rgveda to be 1200-1000 BC. Scholars had unfortunately forgotten that Max Muller himself had at least twice (1885 and 1889) declared that whether the Rgveda hymns were composed in 1000 BC or 1500 BC, or 2000 BC or 3000 BC, etc., no power on earth will ever determine. Indeed the archaeologists and historians needed to be corrected. So a set of scholars have started suggesting that Vedic Aryans came to the area only after the disappearance of the Indus civilization ; while other groups of researchers have sought to prove that the Vedic Aryans too formed part of the Indus population and also contributed to growth of the Indus culture.

Subsequently archaeologists discovered a large number of Indus sites in the valley of the river Sarasvati, which as the geologists assert, seems to have dried up completely around 1900 BC. This river is found very highly praised in the Rgveda. So the discovery of the Indus-Sarasvati brought with it a revolution in the field of Indian archaeological researches. The Indus-Sarasvati civilization was an urban civilization, comparable to its contemporary Mesopotamian civilization and it existed in India in the third millennium BC and it was very much Vedic Aryan and so on. Prof. Kazanas argues : Since this is an Aryan urban culture it must have evolved from a much earlier rural Aryan culture, which is presented in the Rgveda. Indus people too had their own horses. As a result, all the dates suggested by the philological pandits for the Rgveda seem in need of thorough revision.

Of course there is a theory of the indigenous origin of the Aryans, advocated by some eminent Indian scholars. Now in the present context of the newer and newer archaeological discoveries, is it wise to discard this view totally as unscientific, born merely from patriotic frenzy ? Anyway, the migration, if not invasion, theory still persists. Again the Indus people seem to have had cultural and commercial contacts with Mesopotamians. Both the people are found to have certain common cultural, and religious ideas. So the Mesopotamian archaeologists and historians think it wise to assert that the Vedic Aryans borrowed a good deal, such as certain ritual patterns, astronomical ideas and so on from the Mesopotamians. But this assertion would become irrelevant, if the rituals, astronomical ideas, etc. in question were found common in other ancient Aryan civilizations, such as those of the Greek, Slavonic, Germanic or Celtic people. The logical conclusion should then be that these ideas and motifs in question had been originally Indo-European only and not Mesopotamian. A search for finding commonness of the motifs in these different cultures is a very interesting, but highly strenuous intellectual feat.

This stupendous task Professor Kazanas of Athens has undertaken and he has cogently presented his interesting findings in a thought-provoking research paper 'Vedic and Mesopotamian Interaction'. For quite some time Prof. Kazanas had been conducting serious researches in this and the allied fields, and also brought out valuable papers recording his findings. In the pre-sent paper he has argued his points vigorously and convincingly to establish that it is only the Mesopotamians who borrowed from the Vedic Aryans and not vice versa.

Kazanas' paper has appeared as the first article in Brahmavidyc7, The Adyar Library Bulletin, vols. 68-70 (2004-06). Yet it is felt that this research paper should be brought to the notice of more number of general readers and serious students and scholars, interested in the study of the ancient Indian Culture and Civilization. Hence it is being reprinted in the Adyar Library Pamphlet Series, as no. 62. 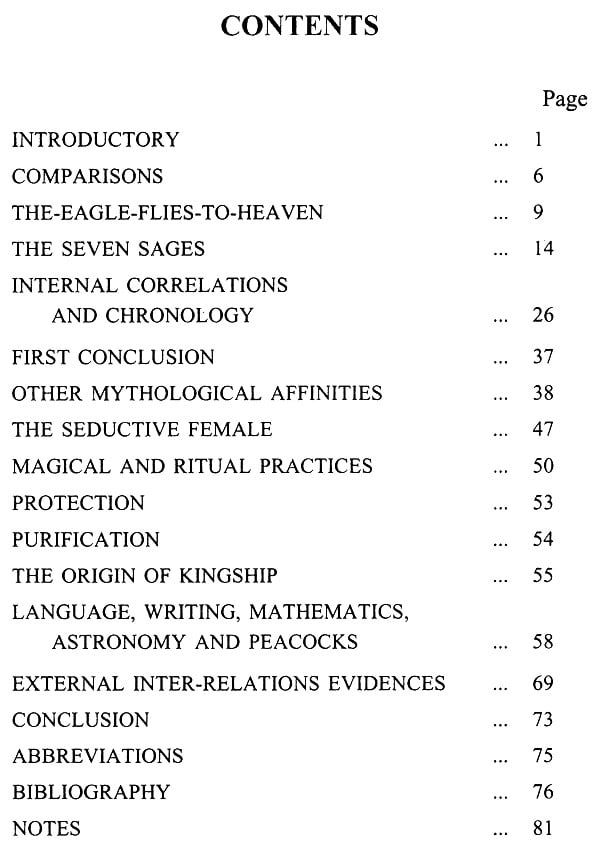 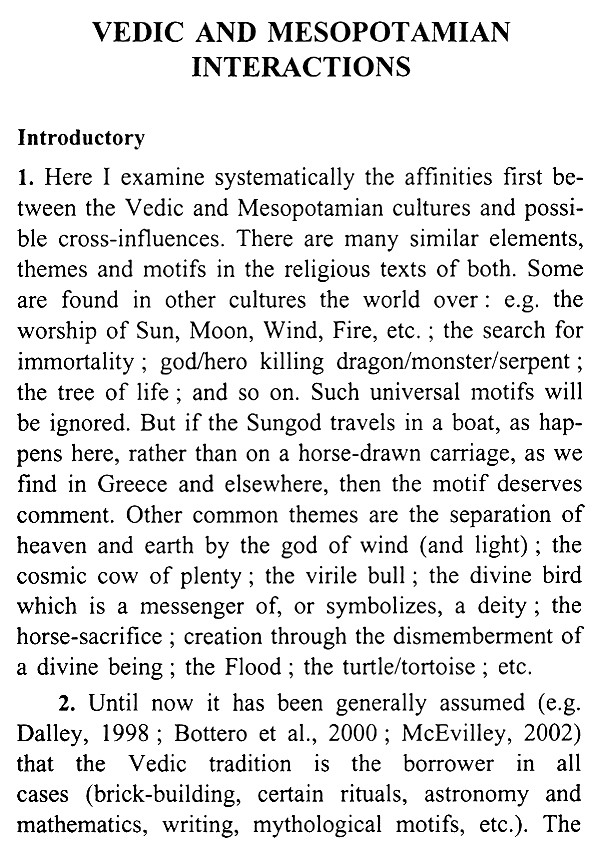 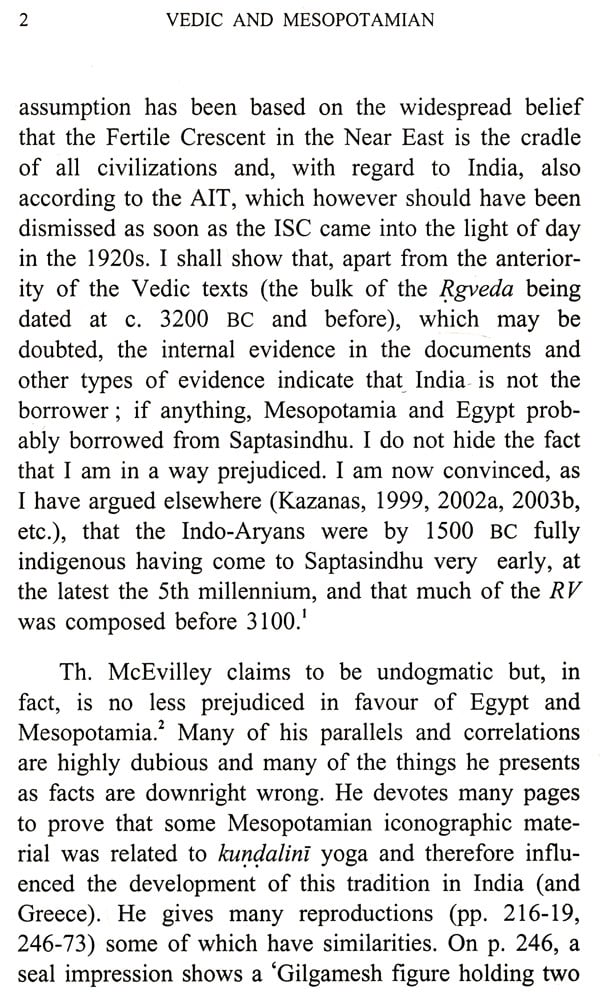 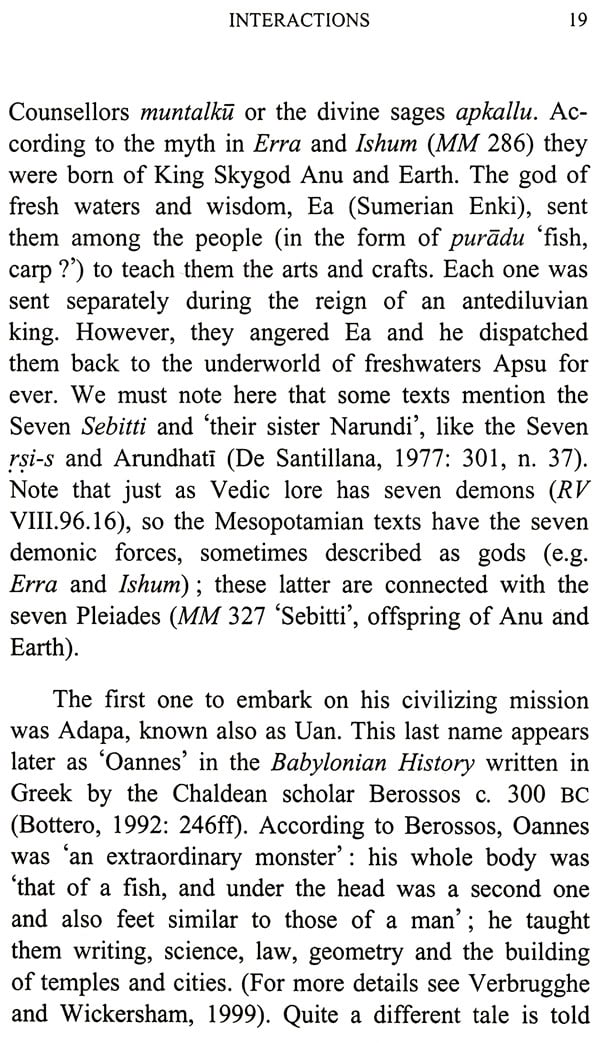 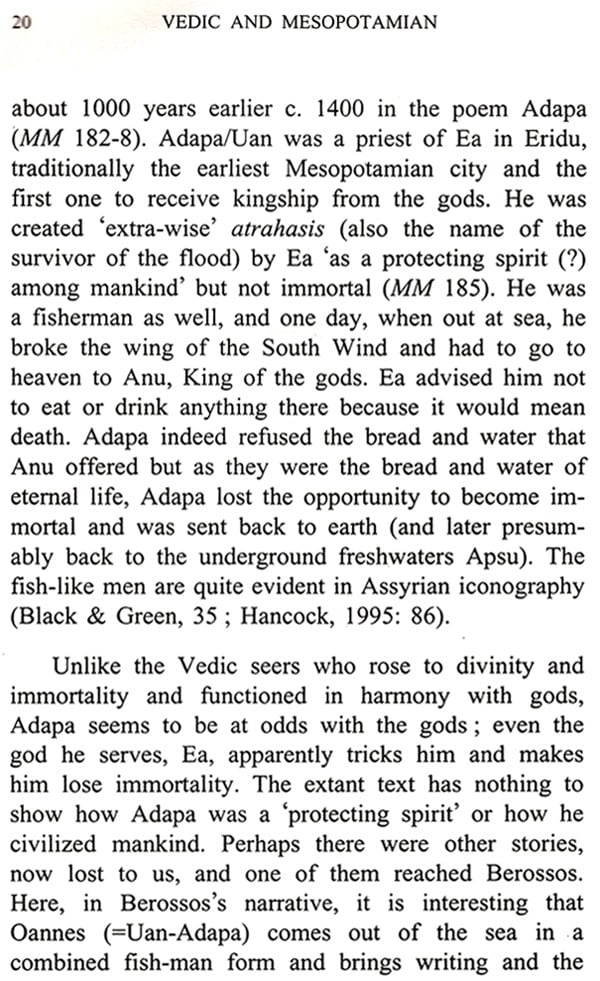