The emergence of periodicals in Hindi for women and girls in early twentieth-century India helped shape the nationalist-feminist thought in the country.

Analysing the format and structure of periodical literature, Shobna Nijhawan shows how it became a medium for elite and middle-class women to think in new idioms and express themselves collectively at a time of social transition and political emancipation. With case studies of Hindi women's periodicals including Stri Darpan, Grihalakshmi, and Arya Mahila, and explorations of Hindi girls' periodicals like Kumari Darpan and Kanya Manoranjan, the study brings to light the nationalist demand for home rule for women. Discussing domesticity, political emancipation, and language politics, Shobna argues that women's periodicals instigated change and were not mere witnesses.

With a perceptive Introduction setting the context, the work showcases rare archival material: advice texts, advertisements and book reviews, and multiple narratives specifically meant for women and girls of early twentieth-century north India. Including thirty-six archival visuals and an exhaustive Bibliography, this volume will be rewarding for students and scholars of gender, cultural, and media studies, history, literature, and South Asian studies.

When I first introduced my project to a librarian at a Hindi archive and told her that I was interested in the literary activities of women in the Hindi public sphere of the early twentieth century, she was surprised by my desire to consult women's periodicals. She politely suggested that it might make more sense to consider another publishing genre carrying 'real' literature. Clearly, she considered periodicals inferior as source material and argued for novels, short stories, and poetry published in monographs and collections. Hers was not a singular voice. Yet, after conducting my research on women's periodicals, I am convinced more than ever that these forms of print contain enormous potential to learn about the literary, cultural, and socio-political developments of the time as reflected upon by women writers in Hindi. Especially from a literary point of view, the periodical represented the primary site upon which new literary genres in Hindi prose and poetry took shape and were experimented with.

The primary sources for this book stem from archival research conducted at the Hindi Sahitya Sammelan Pustakalay in Allahabad. The Hindi Sahirya Sammelan (Society for Hindi Literature) was founded in 1910 in Benares and was shifted to Allahabad the following year, where it developed into one of the most influential literary institutions in the years to follow. Established to provide a forum for discussion for writers, editors, publishers, and a public interested in Hindi, the society launched many Hindi publications and regularly held annual conferences. Since its inception, the Hindi Sahitya Sammelan was a proponent of standardized Khari Boll Hindi in the Nagari script as the national language of the Indian nation, and was thus deeply involved in language politics of the time. Today, the institution carries a much- frequented reference library. Most of the women's periodicals that I consulted there were edited or co-edited by women of the elite and middle classes from the United Provinces of Agra and Oudh.

Retrieving information about the circumstances under which Hindi women's periodicals were published, and on the numbers and spread of their issues, was a challenging and sometimes daunting venture. Many of the publications either no longer existed or had disintegrated in archives and libraries. Unlike British-Indian official documents (parliamentary papers, court records, and official proceedings) that for the most part have been well maintained in Indian and British archives, many vernacular documents-'gendered' literature in particular-do not generally find the wherewithal to guarantee their due preservation. Many women's periodicals in the archive were so fragile and yellowed that turning their pages required much care, but of course they had also not been produced with durability in mind. In the process of binding them into volumes they had often been stripped of their cover pages as well as their advertisements on the first pages. The bound volumes showed missing pages, and sometimes missing issues, which interrupted debates and serialized features.

Still, while mining the archives, I felt excited about reading the very periodical issues which readers of the early twentieth century had leafed through. I eagerly awaited the next issue from the hands of the librarian in order to continue reading a serialized novel or essay. Even though my diachronic reading of these women's periodicals is not comparable to that of their target audience, their spirit, in a sense, was transmitted to me-a reader in the twenty-first century-through these now brittle pages. There was also a sense of privilege in being able to read these documents, thanks to funding, my knowledge of Hindi and my access to the archive. I often paused to let my thoughts dwell on the possible encounters of the readers with these texts. With what expectations had women read these periodicals? Which contributions had they selected first? What features had the children liked most? Had their fathers joined them in solving the riddles? What made a family subscribe to a periodical in the first place? And how may a reader today write about women's periodicals of the past?

I have also treated the periodicals as a rich archive from which to gather information about domesticity, political emancipation, and language politics. At the same time I acknowledge the periodical as a genre in its own right and as an instigator of change, not merely a witness thereof. This leads to two objectives of this book: (i) to trace the development of women's, girls', and children's periodical's in the early twentieth century, and (ii) to discuss selected writings mostly by women for women, girls, and children as they emerged in the Hindi public sphere.

To attune the reader to the contributions in women's periodicals (of which a number appear in full translation in Part Two), I cite from a contribution to Grihalakshmi, a women's periodical published from Allahabad. The passage describes the arrival of the periodical in the house of Sushila, a young woman, whose friend Shanta is visiting her.

Sushila: Listen, sister, someone is knocking at the door. Maybe the postman has come. I'll be right back. (She leaves).

Sushila: Who is it? The postman?

Postman: Yes, today I've brought something that looks like a book.

Sushila: Pass it here. (Sushila takes the book. She is very happy and returns). Sister, Grihalakshmi has come! (She hands it over to Shanta). We'll both read it and benefit doubly.

Shanta: Yes sister, it is wonderful that Grihalakshmi (Margsirs, s. 1973 [November/December 1916]) has come just today, while I'm still here. (She looks at the table of contents). Sister Sushila Devi, I mostly love to first read those articles that narrate of important, brave, and devoted wives. So, I'll read out the story titled 'Kichak and Draupadi as dutiful wives'. But before narrating a story, one must know the name of the author. The author is srimati Damayanti Deviji. Listen. (She reads out the entire story).

The arrival of the periodical is described here as a joyous moment. Shanta is particularly happy to be able to take a look at Grihalakshmi at her friend's house. Each issue was likely to have passed through the hands of many readers in a household and shared with the neighbourhood. The process of reading is described as one in which the periodical is read aloud and not digested in solitude and quiet. Its readers have specific preferences regarding the contributions: Shanta first selects an article about heroic and devoted women. After reading the story, the friends even discuss the contents:

Sushila: Sister Shanta, the lady has written this essay skilfully; but there's a mistake. She has presented Draupadi as the wife of Arjuna only. This assumption is wrong. Draupadi was married to the five Pandavas.

Inspired by this negligence of the author, the friends embark on a long discussion about Draupadi and the epic, referring to other publications on the topic. They are depicted as informed readers who draw connections between multiple sources of information. This passage suggests a possible encounter with a periodical, or, at the very least, it expresses what Sundar Rani, the female author, seems to have envisioned.

Sundar Rani also touches upon how editorial and authorial control was moderated by readers as consumers who themselves selected pieces they would read from a variety of articles and messages found in the periodical. Periodicals may thus be read as disseminators of ideologies pertaining to women's roles in public and private. They may be understood as part of yet another discursive formation of womanhood, this time with women as driving forces. Yet, it were not only editors who interspersed their opinions in the periodical; readers, too, made use of their possibilities to intervene in debates by way of readers' letters and submissions that entered into dialogue with debates of the day. Margaret Beetham (1996) has drawn attention in her socio-historical work on British-Victorian women's periodicals to a shared base of power amongst periodicals' editors, writers, and readers.

While an editor may have determined what was suitable for publication and may have made use of the power to censor or change what was written by contributors, periodicals themselves were commodities that depended on buyers, if not for profit then at least for sustainability. Essential to the success of women's periodicals was that editors catered to women's and men's expectations as readers and (ideological and financial) supporters of women's periodicals, respectively. 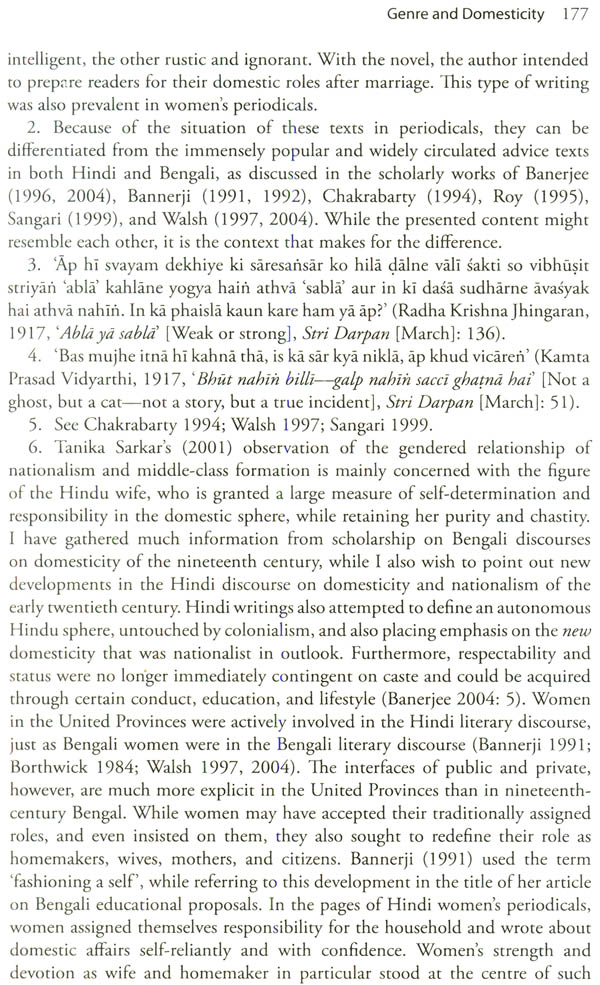 Loved and unloved: The Girl Child in the Family
By Jasodhara Bagchi, Jaba Guha and Piyali Sengupta
$31
FREE Delivery