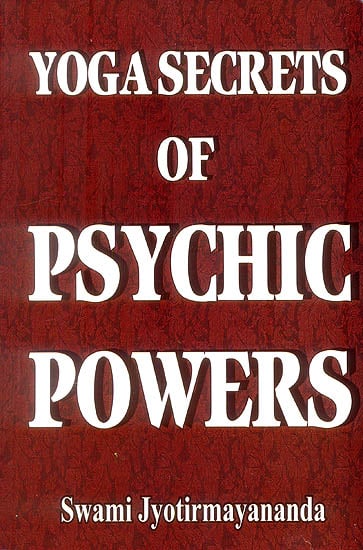 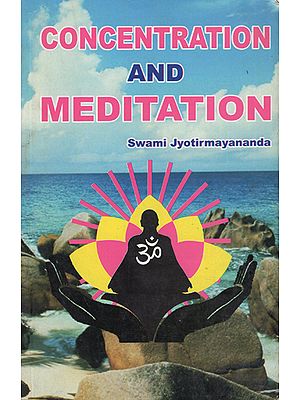 Concentration and Meditation
By Swami Jyotirmayananda
$23.40
FREE Delivery
$26  (10% off)

Introduction of the Book and the Author

The Great Buddha, Adorable Jesus, Bhagavan Krishna, Divine Moses and all great pioneers of spiritual movement were endowed with extraordinary psychic powers. Even many centuries before Christ, the Sages ad Seers of India possessed miraculous psychic powers. How did they achieve their greatness? What secrets did they pursuer in order to unravel the infinite powers of the mind? All this and more is given in this inspiring book, "Yoga Secrets of Psychic Powers". The Genius of Yoga, Swami Jyotir Maya Nanda reveals now those secrets of psychic powers that made these great personalities the immortal torch-bearers of wisdom and cosmic love.

Not only are these psychic powers explained but full instructions are detailed upon so that anyone wishing to tread the path of psychic powers may commence immediately on his endeavour to gain mastery over any technique he chooses.

The mysteries of he mind are ar, far beyond the imagination of any individual. So profound and vast are the possibilities of the mind that even science has never been able to fathom its depths! Deeper than the deepest ocean, higher than the highest mountain, stronger than the mightiest hurricane, and more delicate than the fragrance of rose, such is the human mind that remains unexplored by most people of the world.

Few have known the true nature of the unconscious mind and what lies hidden in its depths. In the innermost regions of the mind lies an extraordinary power, sometimes referred to as extrasensory perception or 'occult powers'. However, in Yogic terminology it is known as Siddhis or Psychic Powers. The renouned author, Swami Jyotir Maya Nanda, tell show these powers are inherent in everyone, but remain untapped and unused. For the vast majority of people they continue to remain unseen and unheard.

Just as resources of oil and gold lie hidden beneath the sea and land, so too, the unique mysterious powers of the mind lie dormant and untouched by man. Mahatma Gandhi of India had great spiritual powers. Even men in different fields of life are able to express powers in different ways. Isaac Newton, the discoverer of the law of gravitation; Einstein, the discoverer of the law of relativity, Wagner, the great composer; Leonardo da Vinci, the great painter and artist, and any others were endowed with extraordinary powers of the mind. Can there by any work of glory and greatness without the power of this mysterious mind? Within these pages, it is shown that the understanding of psychic powers and the secrets of developing them are important for conquering all weaknesses of the body and mind. With an insight into the immense resources of he soul, you move from strength to a greater strength; from success to a greater success, from the ordinary state of consciousness to the extraordinary attainment of Self-realization only known by a few mortal men.

The cosmic Ear hear everything, the Eternal Mind knowns all things, and the Witnessing Self sees all that is confined to the law of cause and effect relationship. The Upanishads say, "This Divine self is hidden in all beings. He pervades all that exists. He is the indweller of all. He is the bestower of the fruits of Karmas (results of actions). He is the abode of all beings. He is the Eternal Witness, Pure Consciousness, Non-dual, and devoid of all limitations."
- Shwetashwater Uapnishad 6/11.

The Universal self is the essence of all, and each one has access to this source through the profundities of his mind. By attuning the individual mind to the Cosmic Mind there is nothing that the soul cannot acquire or experience. This soul in a human being can realize its identity with the Supreme Self. What can be a greater attainment than this? The author emphatically declares that all the secrets of psychic powers are ultimately meant for unraveling the supreme secret of existence- the inherent identity of the soul with Brahman or the Absolute.

On this Book, the author, Swami Jyotir Maya Nanda has given the entire third chapter of Raja Yoga with lucid explanations and brilliant powers. In addition to this the author gives passages from Yoga Vasishtha and Srimad Bhagavat Purana to present different approaches of unraveling the inner powers of the mind. Kundalini Yoga, Mantra Yoga, and truths about the functions of the mind have been included in this unique book for aiding one's quest for the inner powers of the mind and the soul.

This is the thirtieth book of Swami Jyotir Maya Nanda written with usual clarity, profound simplicity and dynamic spiritual force. Showing how these mysterious powers can be achieved, he gives a great emphasis on the complete integration to personality. Therefore, an aspirant in his pursuit of psychic powers cannot become disbalanced or maladjusted in day to day life.

Swami Jyotir Maya Nanda is held in high esteem throughout the world; as a profound philosopher, a renouned religious teacher and the "Genius of Yoga." Thousand of lives have been transformed by his visible and invisible presence and magnanimous writings imbueded with his intuitive knowledge.

Our profound appreciation to Roberto Martinez, the Artist who did the drawings and the staff of Ashram Karma Yogis who have rendered their assistance in the various aspects of the completion of this book.

May your life reveal those great powers that lie in the depths of your mind. And may the Lord grant you Eternal Peace!.

Discover explore the secret powers and mysteries of great yogis of India. Learn authentic techniques of how to acquire psychic powers. See how meditation provides knowledge of past, future, rebirth & death. Experience mystic powers of the soul. Acquire extra energy for body mind. 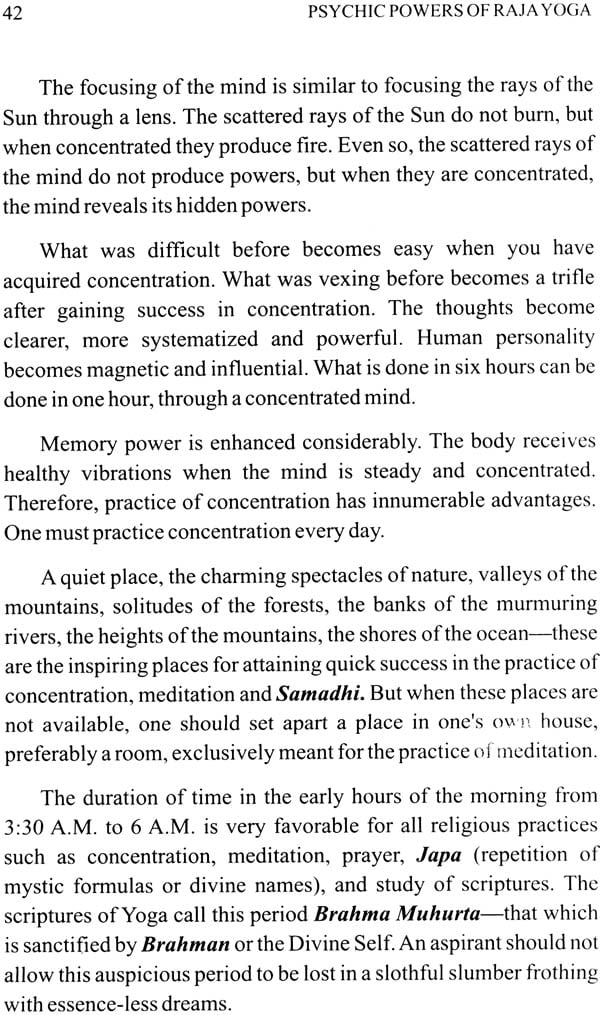 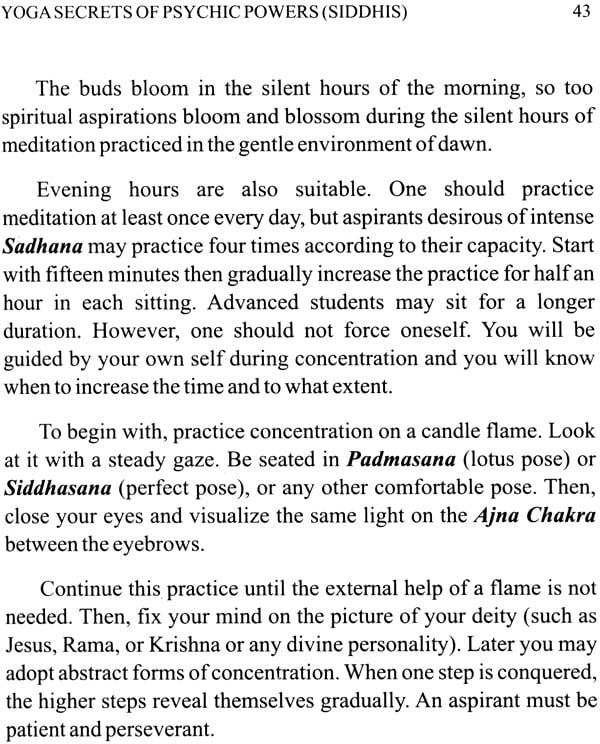 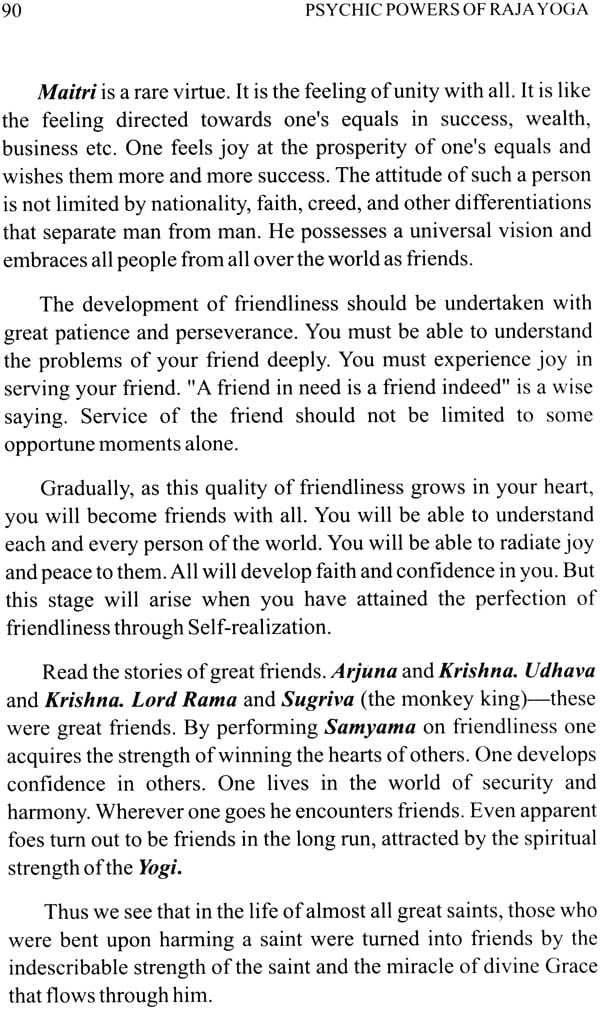 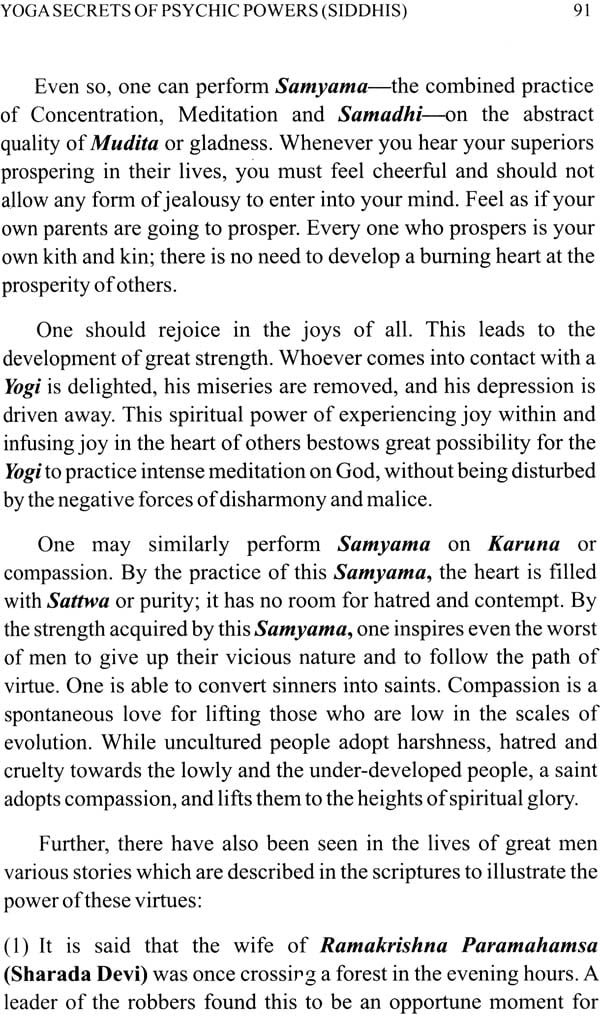 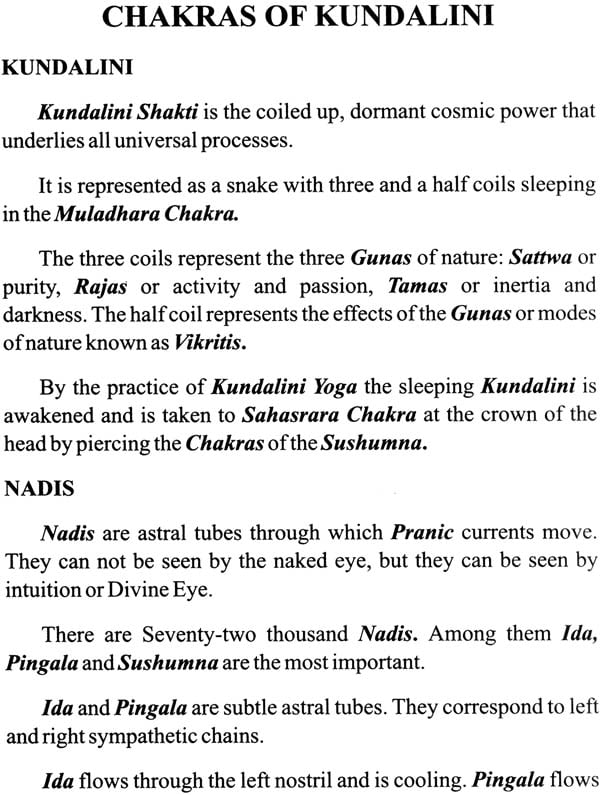 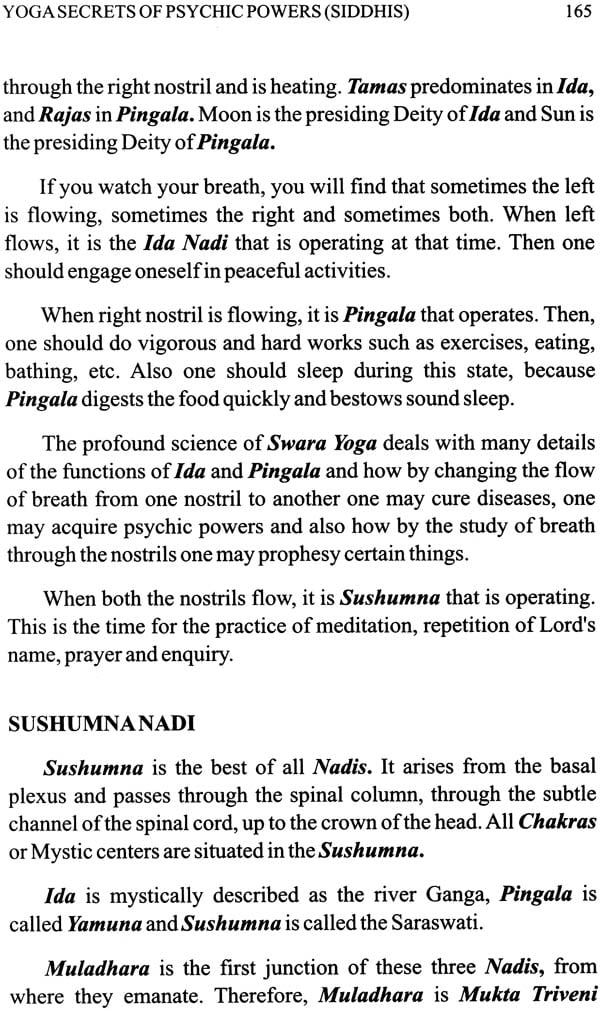 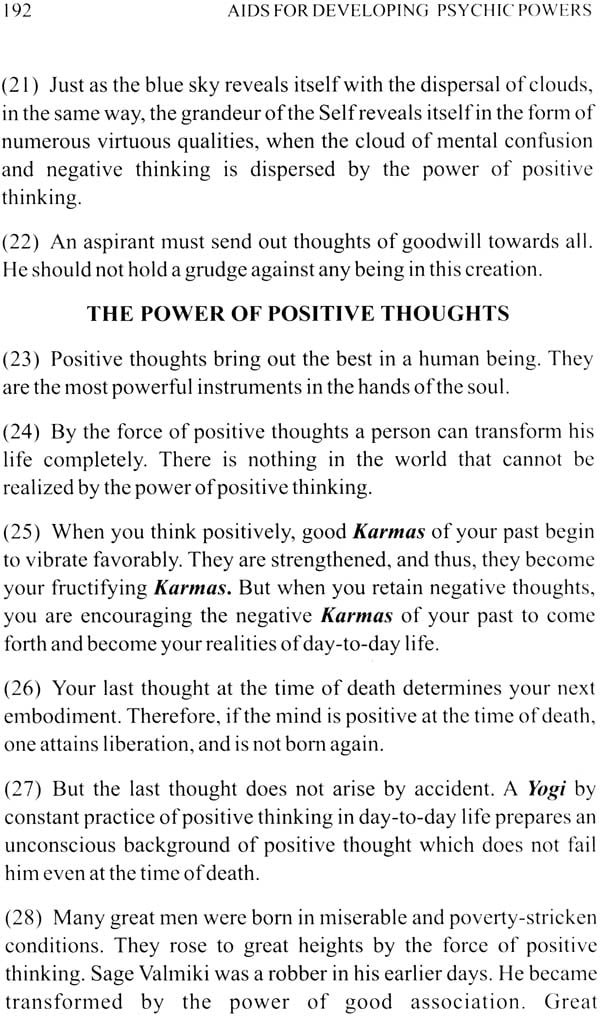 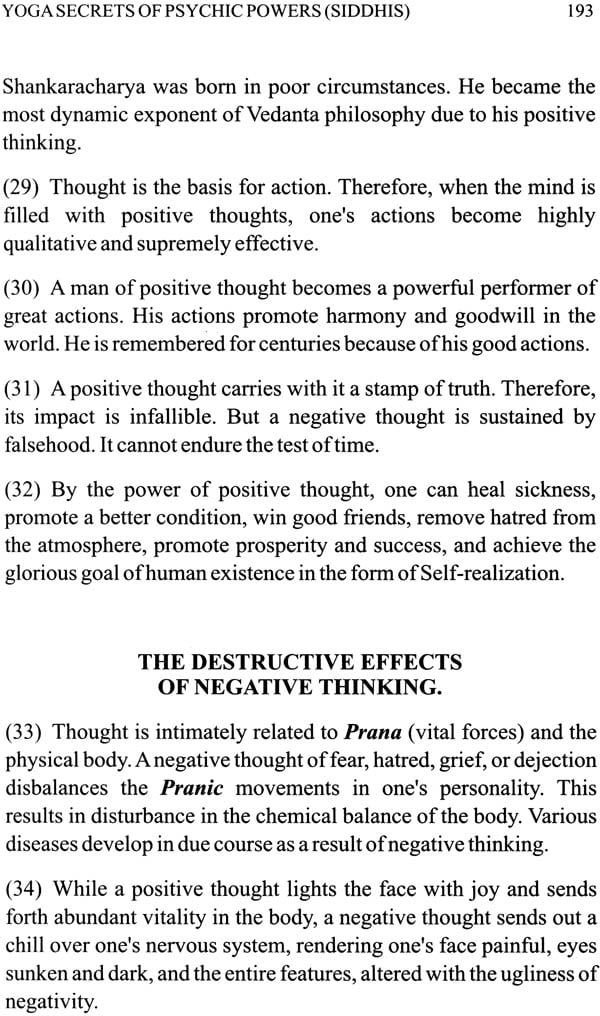 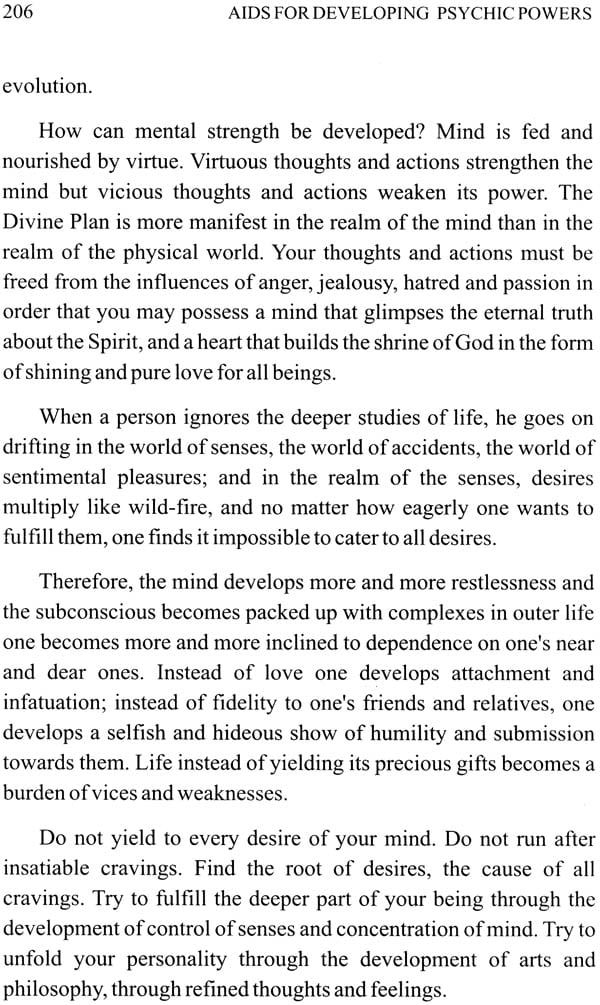 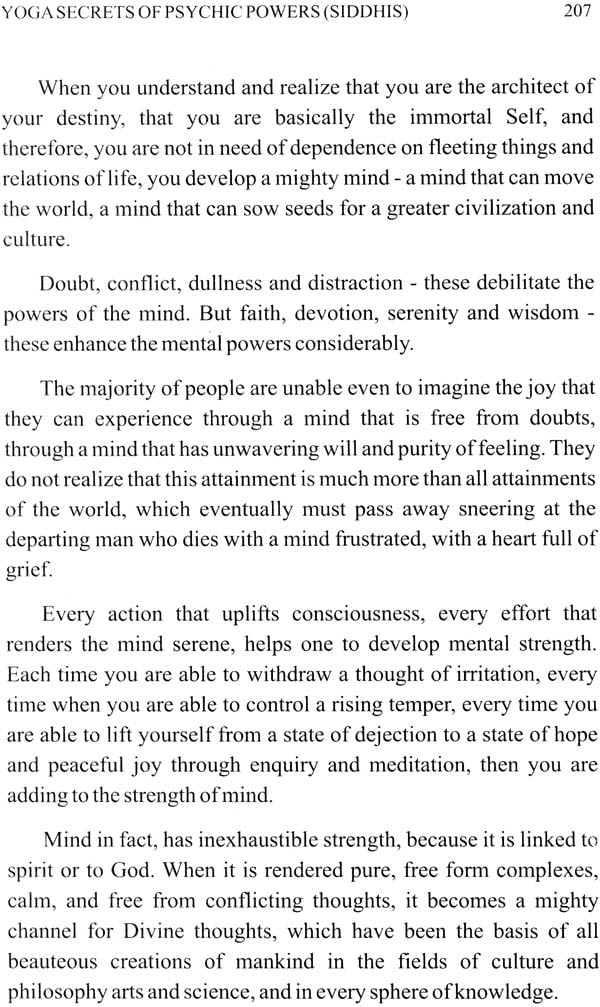 Yoga For Health and Personality (Discover The Physical Mental Emotional And Spiritual Benefits of Asanas, Pranayama, Shat Karma and Meditation)
By Dr.G.Francis Xavier
$19.20
FREE Delivery
$24  (20% off) 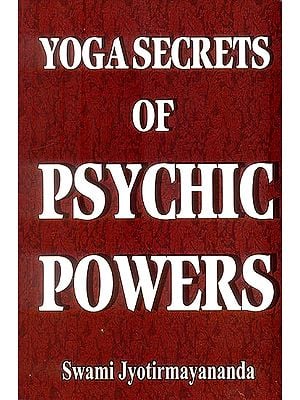 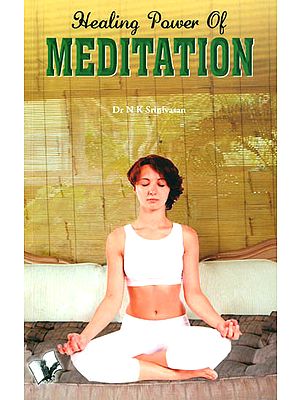 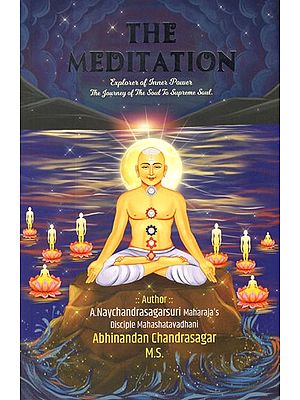 The Meditation- Explorer of Inner Power The Journey of The Soul to Supreme Soul (A World Heritage- With Explanation and Mysteries)
By A. Naychandrasagarsuri
$27
FREE Delivery 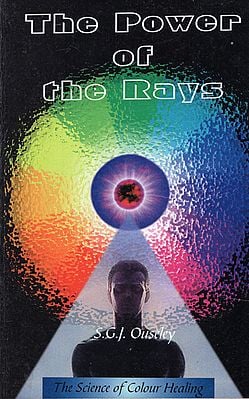 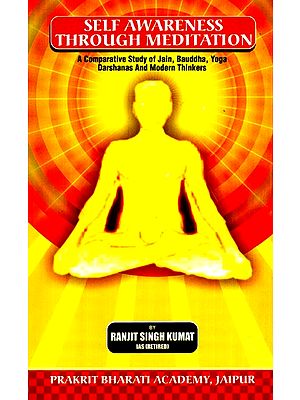 Self Awareness Through Meditation
By Ranjit Singh Kumat
$18 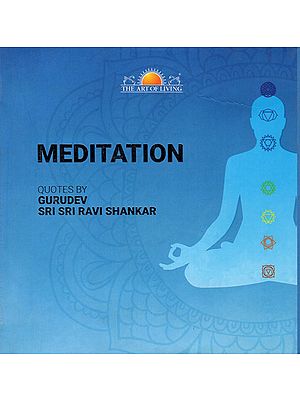 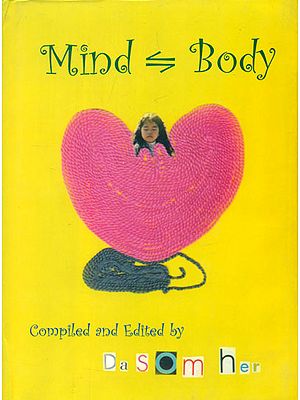 Mind and Body
By Da Som Her
$41
FREE Delivery