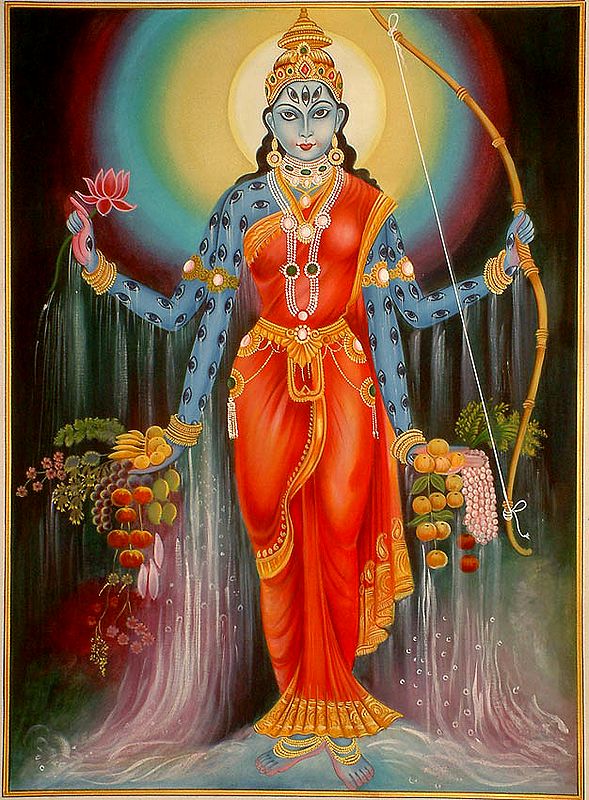 $135.00
Notify me when this item is available
Save to Wishlist Send as E-card Share by Email
1-3. Janamejaya said :-- "O Risi! Wonderful is the story of the religious Râjarsi Haris'chandra that you have described, the great Bhakta of S'atâksî Devî! Why is that auspicious S'ivâ, the wife of S'iva, called S'atâksî? Explain to me, the cause of it, O Muni! And thus make my birth full of use and success. Who is there amongst the clear-minded that gets fully satisfied, when he hears the good deeds of the Devî? Each sentence, describing the good deeds of the Devî, gives the undecaying fruits of As'vamedha Sacrifice."

46-68. Vyâsa said :-- O King! Hearing these words of the Devas and the Brâhmins, the Auspicious One gave them the vegetables, delicious fruits and roots to them that were on Her Hand, for their eating. After She was prayed, She gave to men sufficient quantity of various articles of juicy food and to the beasts, grass, etc., until new crops came out. O King, from that day She became famous by the name of S'âkambharî (because She nourished all by vegetables, etc.) Great tumult arose and the Demon Durgama heard all from the emissaries and started out to fight with his weapons and army. He took one thousand Aksauhinî armies with him (one Aksauhinî army equals large army consisting of 21,870 chariots, as many elephants, 65,610 horses, and 109,350 foot) and, shooting arrows, he came quickly before the Devî and invested Her and the Deva army and the Brâhmins. At this, a great tumultuous uproar arose and the Devas and the Brâhmins united exclaimed :-- "O Devî! Save us; save us." The Auspicious Devî, then, for the safety of the Devas and the Dvîjas created round them a luminous circle and She Herself remained outside. The terrible fight, then, ensued between the Devî and the Dânavas. The Sun was covered with their incessant hurling of arrows; and the shooters could not shoot accurately on account of the darkness that then prevailed. Then by the collision of the arrows of both the parties, the arrows caught fire and the battlefield again became filled with light. The quarters on all aides resounded with harsh bow sounds and nothing could be heard. At this moment, came, out of the body of the Devî, the principal S'aktis (forces incarnate) Kâlikâ, Târinî, Sodas'î, Tripurâ, Bhairabî, Kamalâ, Bagalâ, Mâtangî, Tripurâ Sundarî, Kâmâksî, Tulajâ Devî, Jambhinî, Mohinî, Chchinnamastâ, and ten thousand armed Guhya Kâlîs and others. Thirty-two S'aktis, sixty-four S'aktis, and then innumerable S'aktis, all armed, came out of the Devî successively. When the S'aktis destroyed one hundred Aksauhinî forces, Mridangas, conch-shells, lutes and other musical instruments were sounded in the battle-field. At this time, the enemy of the Devas, Durgama, came in front and first fought with the S'aktis. The fight grew to such a terrible extent that, within ten days, all the Aksauhinî troops were destroyed. So much so as the blood of the dead soldiers began to flow in torrents like rivers. When the fatal eleventh day arrive the Dânava, wearing red clothes on his waist, red garlands on his neck and annointing his body all over with red sandal paste, celebrated a very grand festivity and mounted on his chariot and went out to fight. With the strenuous effort, he defeated all the S'aktis and placed his chariot before the Devî. Then a terrible fight ensued for two Praharas (six hours). The hearts of all shivered with horror. At this time, the Devî shot fifteen very awful arrows at the Dânava. His four horses (Vâhanas) were pierced by Her four arrows; the charioteer was pierced by one arrow; his two eyes were pierced by two arrows; his arms by two arrows, his flag by one arrow and his heart was pierced by five arrows. He then left his body before the Devî, vomitting blood. The vital spirit, the luminous counterpart, emitting from his body, merged in the space-like body of the Devî. The three worlds, then, assumed a peaceful appearance when that greatly powerful Dânava was killed. Then Hari, Hara, Brahmâ and the other Devas began to praise and chant hymns to the World Mother with great devotion and in voices, choked with feelings.

69-73. The Devas said :-- "O Auspicious One! Thou art the only Cause of this Illusion of this world, presenting an unreal appearance (while Brahmâ is the Only Reality). So Thou art the Lady of all the beings (otherwise why it would be that Thou hast nourished all the beings with vegetables, etc). So, Obeisance to Thee, the S'âkambharî! Hundred-eyed! O Auspicious One! Thou art sung in all the Upanisadas; The Destroyer of the Durgama Asura! We bow down to Thee, the Lord of Mâyâ, the Dweller in the five sheaths Anna, Rasa, etc. We meditate upon Thee, the Lady of the universe, as demonstrated by Pranava Aum, whom the chief Munis meditate with their Nirvikalpa hearts (hearts free from any Vikalpa, doubts or ignorance). Thou art the Mother of the endless crores of universe! Thou assumest the Divine Bodies at times for our welfare! Thou art the Mother of Brahmâ, Visnu and others; we bow down to Thee with all our heart. Thou art the Mother of all; so, out of mercy, Thou hast shed tears from the hundred eyes, to remove the miseries of the low humble persons. Thou art the Ruler of all!"

74-80. Vyâsa said :-- O King! Thus when Brahmâ, Visnu, Hara and the other Devas praised and chanted various hymns to the Devî and worshipped Her with various excellent articles, She became instantly pleased. Then the Devî, graciously pleased, handed over the Vedas to the Brâhmanas. At last, She, the Cuckoo-voiced, made a special address to them. "These Vedas are the excellent parts of My body. So preserve these with your greatest care. The more so, when you all have seen with your own eyes what a great calamity befell on you when these Vedas went away out of your hands! You should all worship and serve Me (the Controller of the Space) always; there is no other thing higher than this that I can advise you for your welfare. Read always these My excellent glorious deeds. I will be pleased thereby and will destroy all your bad calamities and misfortunes. My name is Durgâ, because I have killed this demon Durgama; so he, who will take My name Durgâ and S'atâksî, he will be able to unveil my Mâyâ and walk freely. No use in telling more than this that I tell you now, O Devas, the Essence of all essences :-- Both the Suras and the Asuras would always serve Me and Me, alone."

81-83. Vyâsa said :-- O King! Thus giving pleasures to the Devas by these words, the Devî of the nature of Existence, Intelligence and Bliss disappeared before them. O King! This Grand Mystery I have described to you in detail; but this is the source of good to all; so keep it secret with every care. The person that hears daily with great devotion this Chapter, gets all that he wants and at last gets the worship in the Devî Loka.

Thus ends the 28th chapter of the Seventh Book of the Shrimad Devi Bhagavatam, entitled 'The Glory of Shatakshi Devi.'

This artwork faithfully follows the imagery of the Goddess delineated in this sacred text.