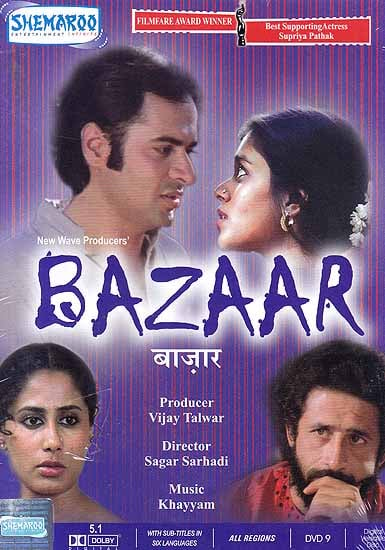 A dying feudalistic soriety with outmoded norms; a debauched consumer culture, where human beings, especially women, are choice commodities; a world in which dreams turn to ashes; a conflict of values that leaves broken hearts in its wake. All this while we stand mutely on the sidelines spectators, helpless and unwilling. Bazaar chronicles the stories of Najma (Smita Patil), who runs away with Akhtar Ali (Hbarat Kapoor), leaving a penniless poet Salim (Naseeruddin Shah), who has only his treasury of poems to offer her. Shabnam (Supriya Pathak) happily building a dream world of her own with Sajid (Farooque Shaikh), a story that mirrors the decaying power of money and wealth.