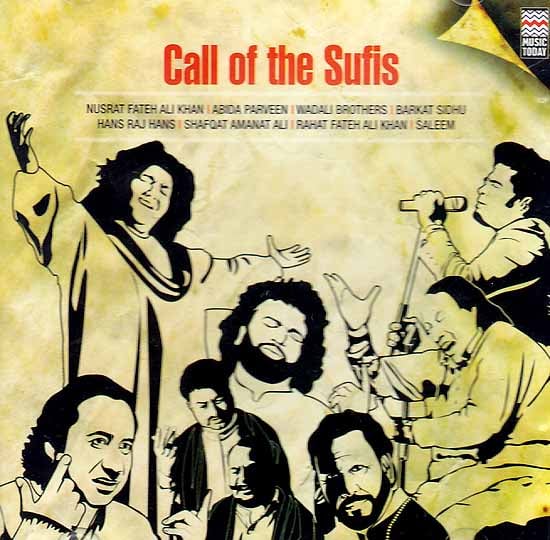 Call of The Sufis (Audio CD)

$27.50
Quantity
Notify me when this item is available
About the CD

Shafqat Amanat Ali is the biggest singing sensation to hit the subcontinent in recent times. He is the son of the legendary Pakistani singer Ustad Amanat Ali Khan, making him a part of the 7 generation old Patiala Gharana. He has been a student of the classical music tradition of India and Pakistan since age four. He was inspired towards music by his father and his uncle Ustad Fateh Ali Khan sahib. He was role of honour from the Music Society of Government College, Lahore and has been honoured by the President's Pride of Performance in Pakistan on 14th August, 2007, making him the 6th in line from his family to receive this honour Shafqat’s voice represents a unique blend of classical gayaki and contemporary panache. The soul in his powerful voice has the rare ability, which can carry the listener to the peaks of ecstasy and the depths of pain within moments. This very versatility makes him a vocalist par excellence. As the soulful voice traverses a gamut of emotions, the sheer perfection of his gayaki leaves the listener spellbound.

One of the biggest names in Punjabi folk music and sufiana qalam, Hans Raj Hans was born near Jalandhar Punjab. He always had a craving for music, and won laurels at various inter-college festivals. But ultimately the tug of his love proved too strong and he gave up his studies. Fascinated by a Sufi fakir who used to do the rounds in his village, Hans picked up the qalams he and his group used to sing, and soon he was the part of the troupe. He also received training from Shahen-shah-e-Qawwali Nusrat Fateh Ali Khan for three years. He has performed across the globe to ecstatic audiences, his repertoire encompassing classical, folk, sufiana and popular music. His audiences lap up every song, be it pop or sufiana. He has been honoured as the State singer of Punjab on two occasions. Highly educated on the subject of sufism, Hans Raj Hans is also a visiting professor at the State University of San Jose in USA.

Rahat Fateh Ali Khan is today’s most celebrated & popular, artiste of Sufi singing. Pakistan's Nusrat Fateh Ali Khan, the most revered Qawwal, before his death in 1997, passed the title to his nephew, Rahat Fateh Ali Khan. In accordance with tradition, Nusrat selected Rahat during boyhood and schooled him in the art of Qawwali, eventually placing him at his side when Nusrat and party performed. He has performed to sold out venues world- wide, including at the Hollywood Bowl (with an introduction by Tim Robbins, who collaborated with Nusrat on the Dead Man Walking soundtrack) and in Central Park with a guest appearance by Eddie Vedder of Pearl Jam. He has also made a great mark as a famous bollywood singer. The music remains a form of spiritual practice to Rahat and he continues to enthrall his audiences through his soulful singing, all over the world.

A child prodigy Saleem is a guru—bhai of one of Punjab’s most popular singers, Hans Raj Hans — they both are shaagird-s (students) of Saleem’s father Puran Shahkoti, a fakir who sang Classical and Qawwali. Some years ago when Bhatinda TV station opened, they had young Saleem as one of the singers on their opening night. People praised him a lot and some newspapers wrote next morning about his fabulous singing. He became a young star in just seven days. Saleem’s initial singing had a lot of Nusrat Fateh Ali Khan’s influence, perhaps because he had a throat capable of bringing out the embellishments that Nusrat was famous for. The song ‘Mera Piya Ghar Aaya’ of Bulleh Shah, sung by Saleem became immensely popular which was already made legendary by Nusrat Fateh Ali Khan. He also sang many other songs which became very popular world-wide.

The icon of Sufi mysticism, Abida Parveen reigns supreme when it comes to rendering of ghazal and sufiana qalam. To hear her is to be in the presence of divinity. She is a powerful vocalist who has made her mark in a number of styles. She is the owner of one of the most remarkable voices on the planet. Abida has evolved a unique, versatile style, which blends elements of classical and folk music. Much of her music is rooted in Sufi spiritual tradition and she has recorded qawwali and related styles, as popularized internationally by legendary Sufi maestro Nusrat Fateh Ali Khan. She is a phenomenon who continues to electrify the sub-continent with her powerful voice. Her full-throated style is one of the most unique qualities of her singing. The robust voice has a haunting quality, which leaves the listeners mesmerized.

Puranchand and Pyarelal Wadali, the well-known singers from Punjab popularly known as the ‘Wadali Brothers,’ are one of the finest and most popular exponents of Sufi music. They have contributed years of efforts to the spiritual folklore of India, and have given voice to the banis (words) of great Sufi saints very soulfully. They have a diverse repertoire and excel in singing sufiana qalaam by Baba Farid, as well as other Sufi and bhakti saints. Their music is an offering to the Divine and they get immense pleasure and ecstasy in praising the Lord through their devotional music, which they have acquired from the rich traditions of Punjab.

Nusrat Fateh Ali Khan, undoubtedly the greatest Qawwal legend of his time, is often referred to as Shahan-shah-e-Qawwali or the brightest star in Qawwali’ for his contribution to the tradition of Qawwali/Sufi music. Nusrat’s music has a universal appeal that transcends the barriers of language, religion and geography. It is said that one can feel him communicating with God through his music. And the force of his singing is so deep that it binds every listener such that there is unison in this offering to God.

Barkat Sidhu was born in Kaniya village near Shahkot in the Jalandhar district of Punjab in 1946. Ha began his journey in music at a vary young age, armed with his melodious voice and talent. Barkat’s repertoire is amazingly diverse. His rendition of compositions of Sufi poets is soul stirring to say the last. His haunting voice moves the inner being to the core with poetry of timeless poets like Bulleh Shah, Shah Hussein, Farid and others. His rendition of traditional compositions such as Heer is unique. Barkat has received many accolades from international organizations as wall.

Call of the Sufis

Sufi music is about the transcendence of the self from the physical to the spiritual realm. It speaks to the soul and awakens the consciousness. It is about surrendering to a higher power and goes beyond the boundaries of religion a spiritual connection that helps attain a sense of detachment form all worldly realities in an attempt to attain oneness with that higher self. Sufi expresses the true power of music and touches the soul of those who sing as well as those who listen.