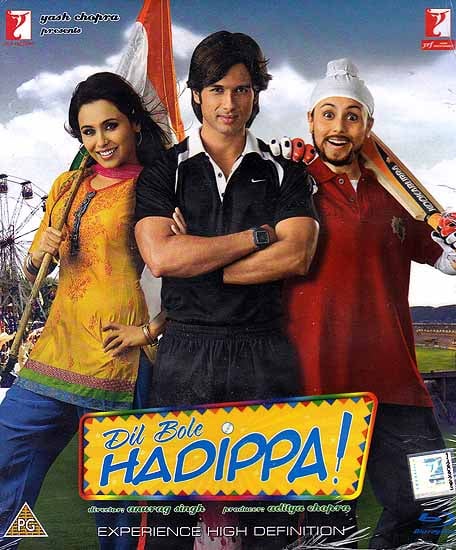 Dil Bole Hadippa is a celebration of the never say die spirit of India. Here, for the first time, the dynamic duo of Shahid Kapoor & Rani Mukherjee, take you on a hide and seek game of romance, passion and dreams.

Veera (Rani Mukherjee) is a fire-cracker of a girl who lives in a small village but dreams in 70 mm. She works in a local theatre group but dreams of playing cricket in the big league. Yes, believe it or not, she wants to play with Tendulkar and Dhoni for India.

While Veera dreams on in India, Rohan (Shahid Kapoor) is an accomplished captain of a country cricket team in England. Rohan returns to India to captain his father’s cricket team which has been losing consecutively for the last 8 years.

In a village where girls don’t play cricket, Veera has to put on a turban and beard and become a man to fulfill her dreams. Her brilliance on the field earns her a place in Rohan’s team and Veera Kaur becomes Veer Pratap Singh.

And then begins a roller-coaster journey of Veera, Rohan and Veer filled with music, romance and comedy through Punjab and beyond.

This tale of turbans, twists and tricks will make your heart go-Hadippa!

Special features, On a separate standard definition DVD to further enhance the quality of the feature film on Blu-ray disc
Making of the film
Hadippa the remix Video
Making of the song
Deleted scenes
Dil Bole Hadippa at the Toronto international film festival
Photo Gallery

Technical constraints to upgrade to high definition due to format in which they are shot
Special features also include theatrical trailer & promos
This Disc is playable only on Blu-Ray Players with bonus view capabilities and seamless menu navigation.