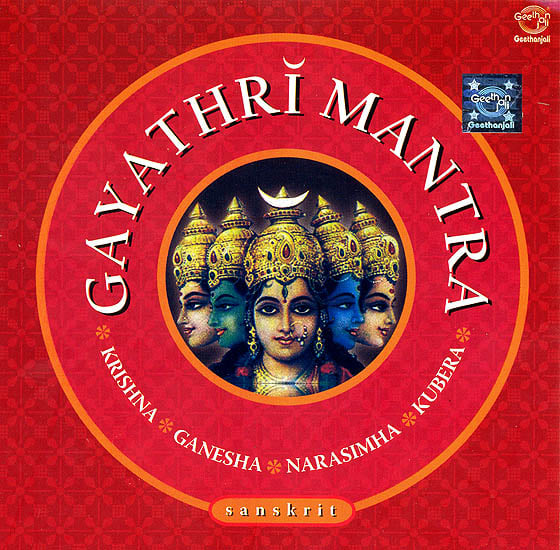 The Sanskrit word mantra signifies an incantation which guarantees protection I those who think of it. chant it and meditate on it.

Among such mantras. the Gayatri mantra is considered to be a storehouse of divir power and excels all other mantras in efficacy and potency. It is the Vedic mantra p excellence and is found unchanged in the Rig. Yajur and Sama Vedas.

Gayatri is only the name of the metre of the mantra. About one fourth of the hymns Rig Veda are set in this metre. Another name of the Gayatri. is Savitri mantra. as tI deity it apparently propitiates is Savita, the sun. Considered to be the quintessence of all Vedic knowledge. the Gayatri is accepted I all sections of the Hindus through the length and breadth of the Indian subcontinenl

It is said that with the strength of the powerful Gaayathri mantra Sage Vasishtl successfully resisted the royal might of the Viswamitra. when the latter exerted h utmost to wrest the Kamadenu (wishfulfilling divine cow) from him.

According to Atri Maharishi. one who recites the Gayatri mantra I 100 times eve day is untouched by sin. According to Yajnavalkya the recitation of Gayathri mant reduces all sins to ashes. Manu. the great lawgiver instructs us thus - "Go to secluded place. Be of a balanced mind. Sit near a body of water and do your daily ritu along with recitation of Gayatri mantra". The Indian sages were of the firm convictic that the significance and vibrations of the mantra would fortify man.

Closer to our times. Maharishi Debendranath Tagore, father of world po Rabindranath Tagore was a great votary of the Gayathri mantra and benefited great by chanting it. Pandit Madan Mohan Malaviya was able to establish the Benan Hindu University through his practice of Gayatri recitation. Mahatma Gandhi h: stated in his autobiography that a votary ofGayatri cannot fall victim to any illness.

According to ancient Hindu tradition. the investiture of the sacred thread empowers a person to chant the Gayatri mantra. Brahmin boys were invested with the sacn thread at the age of eight. Kshatriya boys at I I years and Vaishya boys at 12 years.

The enlightened view is that any person. whatever his caste. creed or colour can chai the Gayatri mantra. provided he does it in the right spirit and understands i

Text of the Gayatri Mantras in Transliteration

The recitation of each of these Gayatri Mantras gives different benefits and brings different rewards. To attain these rewards, one must recite the particularly mantra every day 54 times or 108 times with devotion and a one pointed mind.