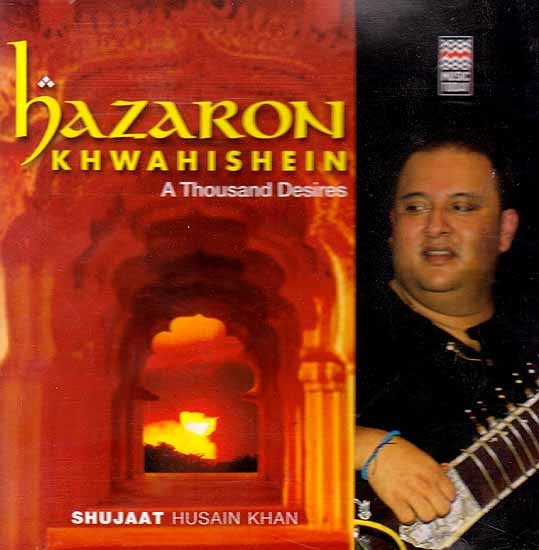 Shujaat Husain Khan is perhaps the greatest North Indian classical Musician of his generation. He belongs to the Imdad Khan gharana of the sitar and is the seventh in the unbroken line from his family that has produced many musical masters. His style known as the gayaki ang is imitative of the subtleties of the human voice.

At the age of three Shujaat Began practicing on a specially made small sitar and by the time he was six the child prodigy started giving public performances. Since then he has performed at all the prestigious music festivals in India and has traveled around the world performing in Asia, Africa, North America and Europe Shujaat Husain Khan has developed his own unique style of playing Indian classical music. His approach to rhythm is largely intuitive fresh and spontaneous always astonishing his audience. He is also known for his exceptional voice which he uses for singing folk songs and poetry.

Hazaron Khwahishein is a unique expedition into the world of music for some this is an unchartered foray into sound and for others an opportunity to explore higher ground with music that has a soul.

This presentation by the sitar maestro Shujaat Husain Khan is reminiscent of the days when poetry and music flowed like pearls of wisdom and love from the pens of great poets such as Hazrat Amir Khusrau, Mirza Asadullah Khan Ghalib and Mire Taqi Mir.

The artiste presents haunting ghazals and Sufi poetry in a unique dialogue with the sitar and his voice. While he retains the pristine beauty of the lyrics he gives new life and meaning to these priceless gems by way of his mellifluous sitar playing and honeyed voice.

From the popular Chhaap Tilak and Aaj rang Hai to the famous Mirza Ghalib Ghazal Hazaron Khwahishein this album presents not only the best in Sufi poetry but also the most beautiful combination of music through the sitar and vocals.

About the CD
Add a review
Have A Question