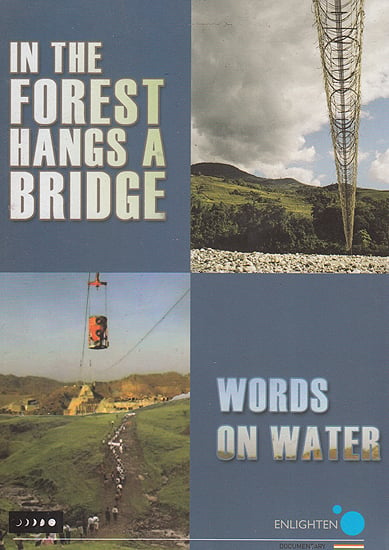 In a Forest Hangs a Bridge and Words on Water (DVD)

Samjay Kak is an independent documentary filmmaker whose recent work reflects his interests in ecology alternatives and resistance politics. His films have won best long film prize at the international festival of Environmental Film & video, Brazil, golden Lotus, for best documentary film at the National film Awards in India and the Asia Gaze Award at the Pusan Short Film Festival Korea.

In the Forest Hangs a Bridge: 40 Mins
Located deep in the forested hills of the Siang Valley of Arunachal Pradesh at the north eastern extremity of India Damro Village gathers to build a 1000 foot long suspension bridge the elegant structures of cane a nd bamboo that are the distinctive mark of the Adi tribe. Their only tool is the dao a blade length of tempered steel the size of machete.

Words on Water: 85 Minutes
For more then 15 years people of the Narmada valley in central India have resisted a series of massive dams on their river and in their struggle have exposed the deceptive heart of India’s development politics. When the use of violence has become the arbiter of all political dabate, words on water is about a sustained non-violent resistance an almost joyous defiance which empowers people as they Strule for their rights yet saves them from the ultimate humiliation of violence.