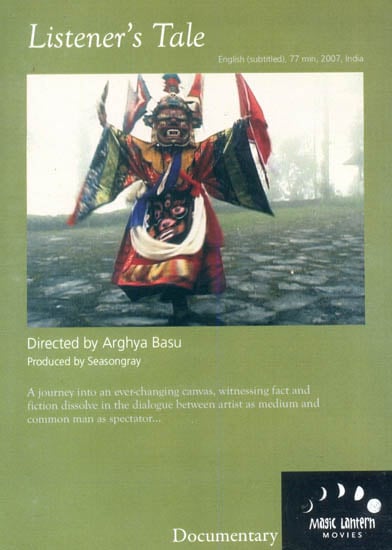 FREE Delivery
Only 1 available
$33.60
$42
(20% off)
Ships in 1-3 days
Notify me when this item is available
From The DVD
Credits
Artist: Arghya Basu
Produced by: Seasongray
Language: English
Format: DVD
Duration: 77 min. Approx
About The DVD

The ink, The reed, The mind, And words appear… ‘Listener’s Tale’s is a journey into hinterlands of magical history. Sikkim/Beyul Demadzong, an erstwhile Tibetan monarchy, is revered as a land of hidden treasures consecrated and blessed by Guru Padmasambhava, the 8th Century immortal messiah of Tibetan Buddhism. In the 12th century, a blood pact is signed between Lepcha chief Thekung Tek and Khye Bumsa, a wandering Tibetan king. The great snow mountain Kanchendzongha, guardian deity of the land, stands witness.

Chakdor Namgyal, the 18th century legendary Tibetan monk-king, dreams of the mountain dancing with his warriors in the court of Lord Mahakala. He writes the Pangtoed Chham dance to immortalize the Lepcha-Bhutia alliance. Its spectacle unfolds in the film as an age-old whisper amidst the chorus of modernity and skepticism.

Born in 1971, Arghya Basu graduated from St. Xavier’s College, Kolkata and completed a PG Diploma in Cinema from FTII, Pune, with specialization in editing.

Is It All About Hips? (Around The World With Bollywood Dance)
By Sangita Shresthova
$29
FREE Delivery
Add a review
Have A Question