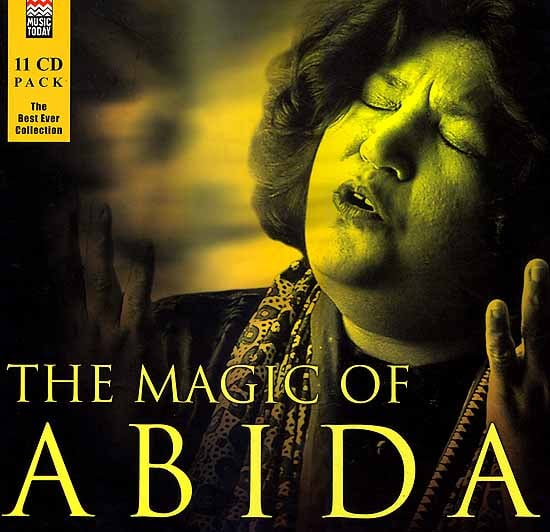 The Best Ever Collection

Abida Parveen is the undisputed queen of ghazal and Sufiana qalam. To hear her is to be in the presence of divinity. Initially touted as the heir to the crown of qawwali king Nusrat Fateh Ali Khan, Abida new weaves a magic all of their own as she enchants audiences all over the world.

The icon of Sufi mysticism Abida Parveen is the only woman Sufi singer in the history of this genre. She is a phenomenon who continues to electricity the Sub continent with her powerful voice.

Born in Larkana, Sindh, Pakistan in 1954 Abida was brought up in an environment of deep mysticism poetry and music of Sufi saints She received her initial music training from her father who also ran a music school and then from the legendary maestro Ustad Salamat Ali Khan of Sham Chaurasi Gharana.

Unlike most women artistes who are known to have given up their musical ambitions after marriage Abida’s singing career took off after her marriage to Ghulam Hussain Sheikh a senior producer in Radio Pakistan.

Her full throated style is one of the most unique qualities of her singing. The robust voice has a haunting quality which leaves the listeners mesmerized be it a sufiana qalam or a beautiful ghazal. Her classical background gives her command over ornamentation and control notes.

The magic of Abida lies in her selection of qalam as well. Her repertoire is a treasure house of qawwalis Sindhi and Punjabi kafis of great Sufi poets and ghazals. Some of her most popular numbers include Are Logon Tumhara Kya Tere Ishq Nachaya Ho Jamalo folk Melodies like Latthe Di Chadar, Dachi waleya and Ghungarva and ghazals like Kal Chaudhvin Ki Raat Thi and Jabse tune Mujhe Deewana Bana Rakha Hai.

The golden voice continues to reverberate in the hearts of millions of her fans across the globe.

This album features the best ever Sufi tracks of Abida Parveen the undisputed queen of Sufiana Qalam. The music reflects her command over ornamentation and notes and is a treat for lovers of Sufi Music. This commemorative pack of 11 CDs presents her versatility & bears her trademark style taking the listener into musical nirvana.