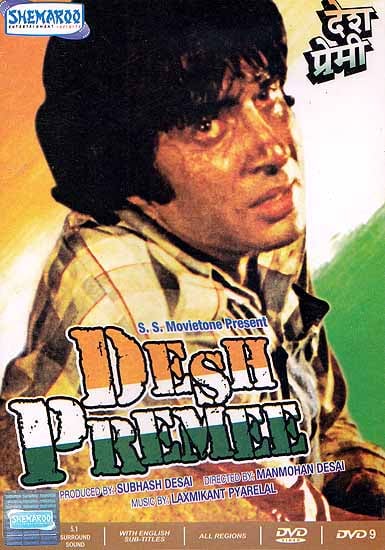 Master Dinanth (Amitabh Bachchan) is a freedom fighter and led the war against the British in 1942 and eventually won the independence in 1947. Master ji finds out about Thakur Pratab Singh’s (Amjad Khan) illegal activities and gets him arrested. In revenge, Pratab Singh gets Master ji wife Bharati (Sharmila Tagore) and daughter Priti (Parveen Babi) kidnapped by Sher Singh (Kedar Khan) to try and change his ways but to no avail. His wife becomes a victim of leprosy and escapes from Sher Singh leaving her daughter Priti in a friends’s care. They settle into a slum called Bharat Nagar which is divided in 4 sections with a don in each one of different background: Punjabi (Shammi Kapoor) Madrasi (Premnath), Bengali (Uttam Kumar), Muslim (Parikshat Sahni). All of them love their own section but nobady thinks of themselves as Indian except Master ji. Fast forward to 15 years later the year is 1962 and master ji now grow-up son Raju (also Amitabh Bachchan) turns out to be the opposite of his father by being drawn into the underworld committing crimes to earn money with his father for Thakur Pratab Singh unaware that Thakur had once kidnapped his mother and sister many years earlier which caused their separation, will master Dinanath find out his son is not what he thinks is?

All region DVD, 5.1 Surround Sound, Digitally mastered from the original film, subtitle in English, interactive menus of songs & and scenes for easy access