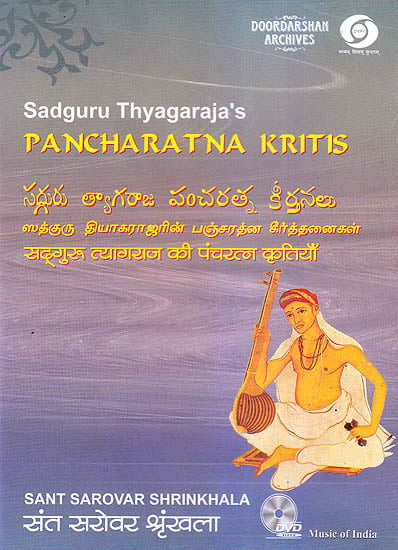 Thyagaraja and the musical path
• Anjana Rajan
Indian musicians of old were revered as saints, and the tradition epitomizes the concept of music as a sadhana, a path to reach the Divine. In the surviving oeuvre of the 19th Century saint-composer Thyagaraja, we find a harmonious blend: on the one hand, there are the human skills of melody, rhythm, poetry, and thought processes of the highest degree, and on the other, the highest spiritual realization that goes beyond human perception.

Thyagaraja’s life and work represented the essence of spirituality within the human plane, because instead of keeping himself as a recluse, following his own individual path to Godhead, he chose to live among the ordinary people and, by example and precept, showed them how classical music can be a vehicle to carry the seeker towards the goal of union with the Divine.

It is only fitting that he is known as Thyagaraja, which translates as ‘prince among renouncers’ and is also the name given to Lord Shiva as enshrined in the temple of Tiruvarur (in the Kaveri delta, Tamil Nadu, South India)

Where the composer was born.
When music is a sadhana, it goes beyond the inspiration of a sermon, which after all teaches from the outside. The lyrics of the songs alone are not what teach and inspire. The discipline of the raga and the tale, the meditative concentration that comes from singing swara patterns solfa passages - and the very act of repetition intrinsic to a set musical rendition, these combine into a multifaceted yoga. So the seeker, in conquering the short-term challenges of manipulating rhythm and melody, calling on the forces of memory, physical stamina, mental agility and single-minded determination, finds the ultimate goal of self-realization becoming a tangible possibility. Musical practice becomes not only a metaphor for, but also a reflection of the path treaded by the seeker of the Self.

With this holistic approach, it is no wonder the Sanskrit word for composer, vaaggeyakaara, refers to one who composes the tune, the lyrics and the rhythmic cycle of a song as a whole.

And as in the case of yoga - the scripture handed down to us by Patanjali - it is a multifold path. Those who walk it receive from it what they desire, or what they are capable of assimilating. The further they walk, the greater the riches they are likely to find. But whenever they decide to camp along the wayside, there too they find sustenance.

Thyagaraja’s compositions range from the simple to the complex. It is significant that he composed works requiting an advanced level of musical training as well as those that can be sung by the lay devotee. It is said he composed according to the needs and abilities of the disciples who came to him. Prom a larger perspective, these differences again could be said to exemplify the varying stages of sadhana.

The pancharatna kritis - ‘five gems’ - are compositions that hold a special place among professional and amateur Carnatic musicians, connoisseurs and lay devotees of God. Every year, to mark the day when Thyagaraja shed the mortal coil, which fell according to the lunar calendar on Pusya Bahula Panchami day of Prabhava (6 January 1847), a huge gathering takes place at Thyagarajas samadhi in Tiruvaiyyaru, Tamil Nadu. Here, united in devotional fervour, a love for Carnatic music and gratitude for the saint whose musical masterpieces continue to sustain generations of musicians and music lovers, they render the pancharatna kritis through song, melodic and percussion instruments.

Besides Tiruvaiyyaru, this festival, known as the Thyagaraja Aradhana (In Praise of Thyagaraja), is held in cities, villages, and even homes across the world. In India, major Aradharras outside of Tamil Nadu include the ones at Icozhikode and New Delhi. The present album is a collection of recordings from various Thyagaraja Aradhanas at Tiruvaiyyaru.

Many well-known faces may be visible among the artistes present. These have not been identified, since at the shrine of Thyagaraja, the Prince among Renouncers, all who come to pay their homage place themselves at a common level, as fellows in sangeet sadhana, the musiéal path to salvation.

Joy of the universe, lord of Janaki’s heart, victory to You! O, Shri Rama, if the gods are the stars that shine with infinite light in the heavens, then You are the moon, beside whose effulgence their luster dims. You are the embodiment of virtue, reclining in regal splendor upon the Milky Way. With Your beauty, your words of sweetness, You bring bliss to Your devotees. Victory to You!

The composer also includes in this composition, allusions to the demons destroyed by Shri Rama for the sake of protecting the virtuous.

The metaphors and similes to be found in the composition provide examples of his poetic excellence and vivid imagination, such as when he describes Shri Rama destroying sins as a lion putting to flight a herd of menacing elephants.

The rage Nattai is considered a melody of grandeur and musical gravity.

Thyagaraja has chosen this raga to manifest the omniscience of his Lord through tune, rhythmic patterning and poetry.

Dudukugula naanne - Raga Gowlai
In the second pancharatna kriti we find a moving illustration of devotion in a poignant mood. O Lord! Omniscient one! Who, apart from You, can lift one such as me from the mire of evils? My mind urns hither and thither, confused, among the labyrinthine ways of the sensory world.

Since childhood, I have forgotten the joys of singing your praises. Oh, the time I have lost in futile pursuits!

I thought the happiness afforded by the senses was real bliss, and I never surrendered myself at your feet.

Hampered by an unstable mind. I was unable to meditate upon your lotus face. Seeking unhealthy companionship among the worldly, I continued to suffer. I didn’t even consider how precious this human birth is. Instead of using this body to try and achieve Supreme bliss, I became immersed in desire, anger and other sensory reactions.

0 Lord, make haste to pull me out of this mire, this quicksand this smothering me.

Sadinchane O manasa- Raga Arabhi, Tala Adi
In this composition, set in raga Arabhi and Adi tala, Thyagaraja, though a devotee of Shri Rama, refers to the Lord’s exploits in his incarnation as Krishna, recalling his exposition of the Bhagavad Gita on the battlefield to assuage the doubts of Arjuna. O heart, the Lord has not kept his word! Lord Krishna did not follow his own advice. According to the time and circumstances, he did as he pleased.

I worship him so intensely, yet He has never come to my succour. He tested (his parents) Devika and Vasudeva no end. He tormented the milkmaids who loved him, he reveled in Yashoda’s motherly love.

Lord of all virtues, Shri Rama is known as compassionate to all his devotees, yet he remains indifferent to my devotion.

He was pleased with my prayers and accepted my offerings, yet he did not come to save me when I needed him. He only advises me to be patient in my misery!

O Rama, accoutered with weapons that give off a golden light! Your divine appearance brings bliss to devotees.

After being blessed with a sight of you, the child Dhruva forgot the troubles heaped on him by his stepmother.

When Hanuman described you to Sita. She gave herself up to thoughts of you. The very image of Hanuman holding your divine feet in his hands, his eyes all the while fixed lovingly upon your face, makes it obvious how mesmerisingly beautiful you are.

Sita’s eyes, brimming with love, are fixed upon your lovely face, lustrous like the moon. Thyagaraja too, overcome with endless love, gazes on you, soaking in your beauty as if sipping on nectar.

Endaro Mahanubhavulu- Raga Shri, Tala Adi
To the many great souls in the world, I offer my obeisance.

There are any number of devotees in whose heart Shri Rama is to be found, who are joyful at contemplating the vision on his divine, indescribable beauty.

There are any number of seekers who, through the medium of divine music, are able to internalize and experience the Ultimate Truth as told to us by the scriptures.

There are any number of blessed souls who have seen the vision of the Lord within the deep recesses of their heart;

Who are eager to surrender themselves to the Lord, offering their heart like a lotus blossom at his feet.

Seekers who couch their worship in music, praising him with melody and rhythm in many languages.

All those devotees who give themselves up to contemplation of Shri Rama, Who become his true followers,

Thyagaraja tires not of singing their praises.