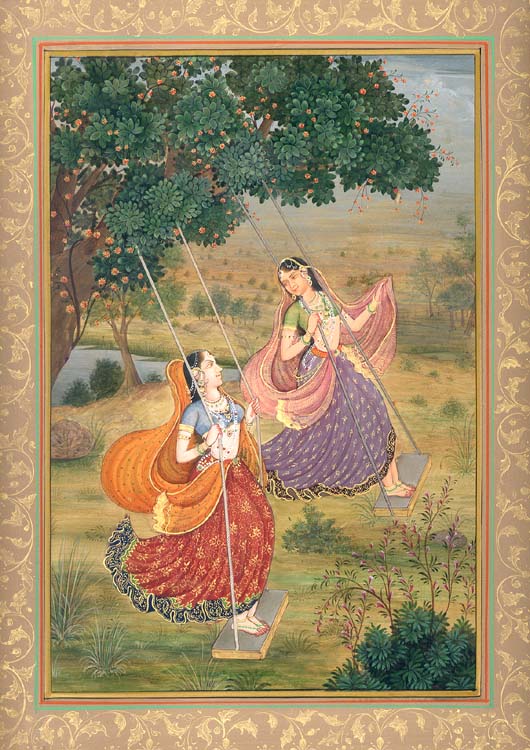 Maidens Welcoming the Arrival of Shravana

Fair trade
A painting in medieval style of Indian miniature art, depicting maidens enjoying swing, is variedly interpreted, sometimes as representing Raga Hindola and at others as celebrating the arrival of the month of Shravana and the festival of Pavasa and Rakshavandhana. The Indian tradition of aestheticism depicts the latter, that is, the celebration of Shravana, under two different conventions. If the painting depicts vipralambha shringara, or the love in separation, it comprises a baramasa painting. A baramasa painting does not so much depict nature as it explores the grieving heart. But, when a painting depicts sanyoga shringara, or the love in union, it emphasises more on the depiction of nature and the jubilation associated with it. It essentially falls under the genre of sadaritu varnana, that is, the appreciation of sadaritu, or the six seasons of the year.

The depiction of maidens enjoying swing usually presents a difficult situation. Swings relate to the month of Shravana, but typically the associated emotion of love may not be defined either as separation or as union. The maid who comes to her brother for the Rakshavandhana, leaving her husband's house, does not suffer the pangs of separation but only rejoices her sojourn. Obviously, a painting that depicts maidens swinging may not be classed, in its strict sense, either as a baramasa painting or as sadaritu varnana. The swinging damsels may be best defined as welcoming the month showers. And, taking off from the earth and swinging into the sky they fascinate Indra, the patron of clouds, and tell Indra, always greedy of beauty, to send his rains to the earth, as the beauty that she has is more fascinating than what he has in his Amaravati.

This miniature, with its foggy landscape comprising of shrubs growing all around, trees waving with monsoon winds, ponds filled with water, blooming creepers and plants and the brilliant mid-day shrouded with evening like shadow, obviously defines the month of Shravana, but it is neither the baramasa theme nor the sadaritu varnana. The damsels are enjoying swings and with their heavenly beauty inviting Indra to let his rains drench their bosoms and have a taste of that, which they, or their lord Indra, did not have ever before. The wind-god Marut, however, intrudes and to taste their beauty attempts at taking away their garments, the lehengas and odhanis, but he little succeeds. The large eyed, fair complexioned, tall and sharp-featured damsels, dressed in simple but colourful attractive Rajasthani costume, would not, however, concede to his attempts. It is only when the god of rains have soaked them from toe to head that they would unclad their beauty and let him have a taste of it. To emphasise the rise of this inherent emotion, the kama, as it is known in the Indian tradition, the artist has blended with the depiction of Shravana the features of Vasanta, especially the Madhumaliti creeper in full bloom. Madhumaliti, covering with its beautiful flowers the entire Saptaparni tree, blooms usually around Vasanta, that is, around February. Vasanta is synonymous of the love-god Kama.

Stylistically, the painting follows the tradition of medieval Rajasthani miniature art. Its soft colour tones and the landscape is more akin to Bikaner tradition while the features of the maidens are close to Bundi art style. Costume and ornaments are common to all Rajasthani schools, though they incline to be closer to Jaipur art style. A largely barren landscape, despite that it depicts the month of Shravana, and the scanty shrubs and trees are chararctistric of Rajasthani topography.