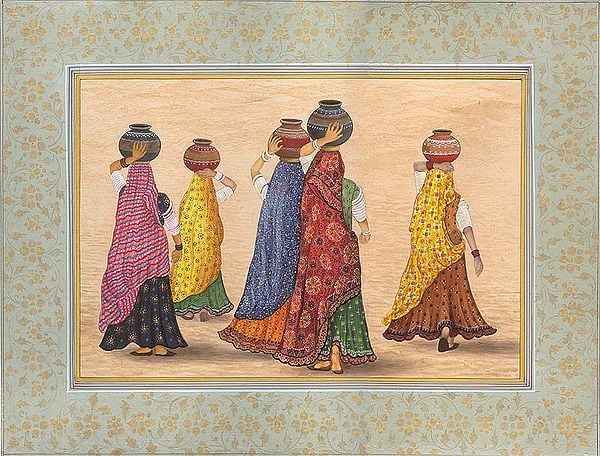 $325.00
This item can be backordered
Time required to recreate this artwork
8 to 10 weeks
Advance to be paid now
$65.00 (20%)
Balance to be paid once product is ready
$260.00
Notify me when this item is available
Save to Wishlist Send as E-card Share by Email
Pleasing the eye with its naïve simplicity and purity this miniature celebrates India's one of the ages old life modes  a colourful transformation of monotonous and tiring labour, broadly a thing that defines the basic character of Indian culture which sought to add colours and festivity to all routine things. Here, post crops annual shopping transformed into colourful fairs, and weekly needs, into bustling bazaars hosting negotiations of disputes, marriage-settlements, couriering messages and allowing scope for dandyism and connaughting. This painting portrays one similar aspect of India's village life : the homewards going Paniharins  water fetching women, with pitchers on their heads.

In Indian climatic conditions water in good quantity was everyone's need. Everywhere, more particularly in areas which did not have good rainfall or ample water resources, such as Rajasthan, Bundelkhand, Gujarat, Saurashtra women folks were the traditional water fetchers since ages. State was duty-bound to develop water resources  tanks, ponds, wells The most pious act which a rich donor could do was construction a dug-well or baori, a stepped well. Usually such public dug-wells were constructed on the outskirt of a village, which necessitated the water fetching women to go in groups and, being outside, presentably dressed. Till recently, groups of colourfully attired women with pitchers on their heads heading towards a well  Panaghat, or back was a country-wide phenomenon, which at least in remote villages, more so in water scarcity areas, still prevails. Except the effluent  hardly a few in the entire village, water fetching was one of the essential functions of all village women. Usually, when the day cooled and the sun headed westward, groups of women would set out to fetch water singing a ballad, a folk song, humming a tune, or conversing, the theme being usually from around them. Here class disparities dissolved; castes were rendered largely ineffective; religions did not come in between; and, age factor didn't work. Not merely that numerous medieval romances and 20th century Indian films centred on Panaghat, Paniharins and passers-by stopping on the Panaghat for quenching their thirst, but were also marketed many commercial products, cooking mediums and garments in special, using Panaghat and Paniharin as their brand names.

The painting represents five Paniharins garbed in characteristic Rajasthani lehanga, odhani and choli proceeding homewards after fetching water. Instead of capturing their front pose, as most artists and cameramen would do, the painter has caught on his canvas their back view which has not only dramatised his theme but also shifted to it complete focus and at the same time utterly simplified it. The front pose would have engaged the eye to the beauty of face and figure, their modelling  sensuous or otherwise, anatomy and similar other things, not the theme that the artist aimed at rendering, or barely the class of the portrayed women  Paniharins as they are, which beyond their individual identities he wished to underline. Here he has ample scope to portray the beauty of their feet, their gait and above all their diversely patterned, designed and coloured costumes. It is only to have in focus only the figures of Paniharins - his theme, that he has not diversified his background lest forms distracted the viewing eye. Opaque pale background without a discernible form, except the shadows of the women, suggests that the sun has set though its glow yet lurks and with it blooms the evening, and that a distance has been covered but their homes are yet far off. 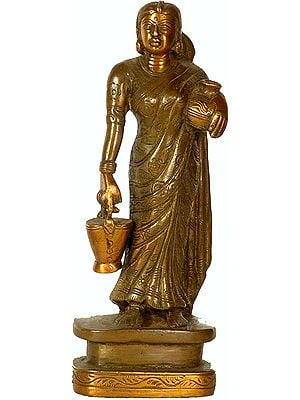