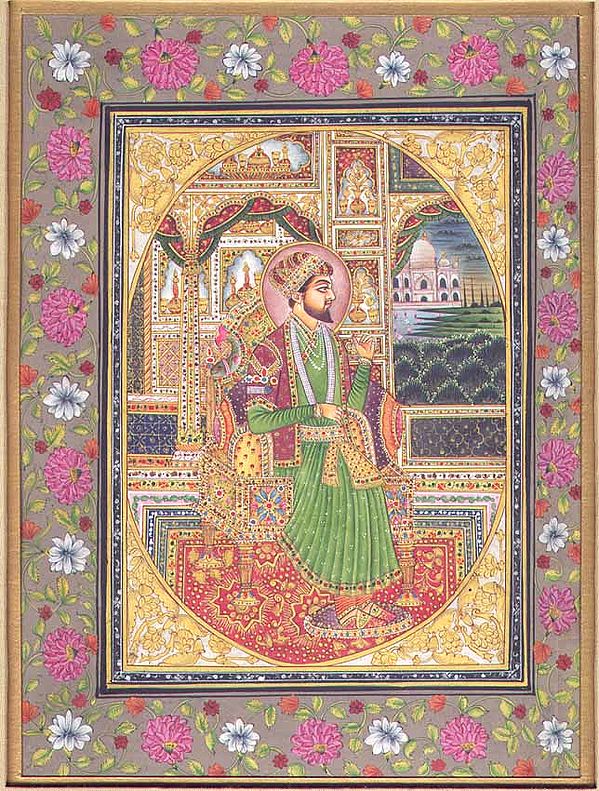 $85
Quantity
Notify me when this item is available

Fair trade
Later Mughal paintings are pleasing but are increasingly mannered reflecting a penchant for decorative pictures. There is outward elegance and technical finesse in this lavish picture but it lacks the vitality and the creative urge of the early Mughal style.

Shah Jahan's state portraits became progressively stiffer. Painters felt constrained to record only what was suited to the full court. Here, Shah Jahan sits upon a sumptuously incrusted Peacock Throne which has an ornamental backrest furnished with large cylindrical cushion, which is a characteristic component of Mughal thrones. The painting assumes a glacial hardness of the stones Shah Jahan so admired. He is seen in fullest glory - as a votive image of a state cult. The emperor is attired in a long angrakha reaching almost to his ankles. The wrinkled pyjama is, however, visible. Over the angrakha, Shah Jahan wears a short coat. Around the waist is a sash with both the edges falling in front. The turban is typical of his reign with a broad band which is ornamental.

In the background can be seen, the Taj Mahal, the tomb of his beloved wife who died after having borne fourteen children. A lotus pond with a lone swan is also visible. An oval picture in a square frame was a popular style. The ends are decorated in floral patterns in gold pigment which has been used extensively all over the painting. The ostentatious painting has a border of naturalistic flowers, leaves and stems completely devoid of the overbearing gold.

However masterful the painting, however refulgent the halo and however jewel-like the colors, the space around Shah Jahan is a vacuum in which he is hermetically isolated.