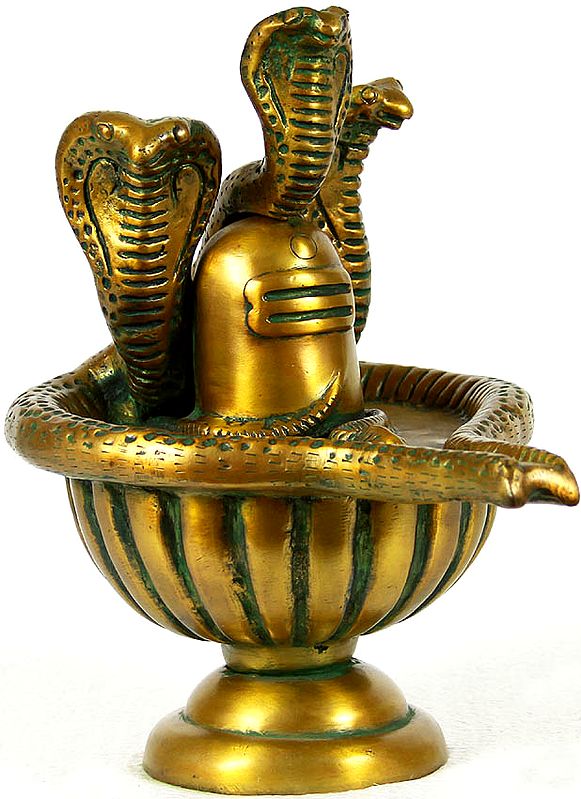 Cast in copper-anodized brass, this contemporary artifact, with rare antique appearance, which it acquires from the copper’s subdued lustre and mystic Tantrika look, represents Lord Shiva as ‘Ling’ – his aniconic form. Shiva’s both forms, the aniconic ‘ling’ and his iconic image, one symbolising his unmanifest form, and other, anthropomorphic, have been in prevalence since Indus days. There figure among the excavated material from various Indus sites terracotta icons of votive ‘ling’ and ‘yoni’ as well as terracotta seals with a ‘Yogi’ figure with soiled coiffure engaged in penance cast on them. Such figures, with a number of animals, especially a bull, around, are almost unanimously identified as Pashupati, patron of animals – Shiva’s other most prominent name. Shiva’s personalised form portrays an act or an aspect of his being, as Mahayogi form in Indus seals, but ‘ling’ is symbolic of his formless timeless existence out of which all forms evolve, and hence, ‘ling’ is essentially Shiva’s votive form.

Its antique appearance and medieval modelling apart, a simple Shiva-ling icon, it has an unusual form. The proper Shiva-ling form : a ‘ling’ icon enshrining ‘yoni’, has been installed on a lotus raised over a circular two-tiered pedestal for giving it proper height perspective. Lotus is essentially an element of Vaishnava iconography rarely seen with Shiva’s form, not even as part of the offering made during a ritual worship. In Vaishnava iconography, as well as otherwise, lotus is symbolic of three cosmic zones : ocean, earth and sky. Here in this icon, with dark zones alternating the bright, symbolic of day and night, lotus symbolises time which Shiva as ‘ling’ pervades. Its modelling too has a distinction of its own. Compared to its female component – yoni-part, the male counterpart is tinier in size; however, a prominently delineated ‘Tripunda’ mark and three snakes with upraised hoods crowning it afford it a sense of proportion. In a rare innovative manoeuvring the artist has used the forms of two of the three snakes for defining the peripheral elevation of the ‘yoni’, while the third he has used around the root of the ‘ling’ covering the joint.

The symbol of imperishable life, inexhaustible energy and unceasing act, snakes denote that the desire to create which the union of Shiva and Shakti symbolises is incessant, persistent and ever live. In Shaivite thought Shiva is the ‘Purusha’ – the enlivening Self, and Parvati, ‘Prakriti’, the manifest and unmanifest matter out of which Shiva effects creation. The Shakta perception attributes to Shakti priority over Shiva. In Shakta thought, the desire to create is the attribute of Shakti which is incessant in her. It is she who kindles in Shiva the desire to unite and create and is thus Shiva’s enlivening force. The Shakta Tantrism goes still farther acclaiming Shiva as mere dead mass that Shakti enlivens by her union. Thus, whatever the contentions in regard to relative priorities of Shiva and his female aspect – his consort Parvati or Shakti, the union of the two – Shiva and Shakti : the male and female principles which the Shiva-ling form manifests, is the crux of Shaivism.