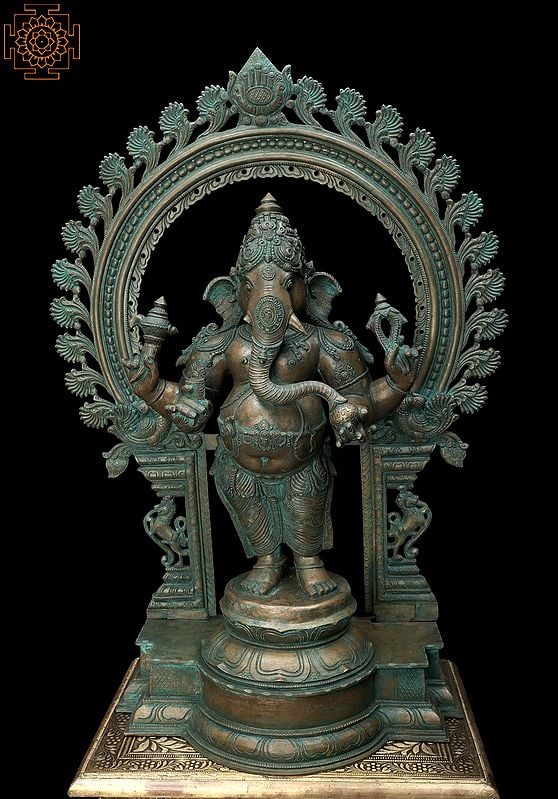 The soul of the ekadanta (single-tusked) Ganesha reaches out to all who are in need of His succour. He is omniscient, omnibenevolent, and omnipotent. Son of Lord Shiva and Devi Parvati, His baala-roopa (child-form) is revered and adored at once by Hindus all over the world. The life-sized murti that you see on this page captures a facet of Lord Ganesha that is replete with wisdom and equanimity. On a tal lotus plinth He stands, the hips jutting slightly to the right. His legs are clad in a dhoti down to the ankles, tied right beneath the signature pot belly that is proof of His timeless love of laddoos. His torso and arms are bare but for the ample gold and jewels that signify His divine status. He is chaturbhujadhari, the one possessed of (‘dhari’) four (‘chatur’) arms (‘bhuja’) and in His anterior left hand, of course, He cradles a laddoo. The elements described heretofore are integral to the iconography of Hinduism’s Lord Ganesha.

The engravings on the Lord’s crown and the delicate venation of His ears have been sculpted in painstaking detail. Those frame a composure of countenance that is fierce and determined. A circular tattoo and bell at the base of the trunk, serrations down its long, muscular length. The lotus-shaped structure of the plinth blends into a wide-set platform. From either side of the edge along the back rises Yali brackets, a quintessential feature of Southern architecture. An ornate prabhavali (aureole), much like the one that surrounds His father’s Nataraja form in classical iconography, completes the composition.