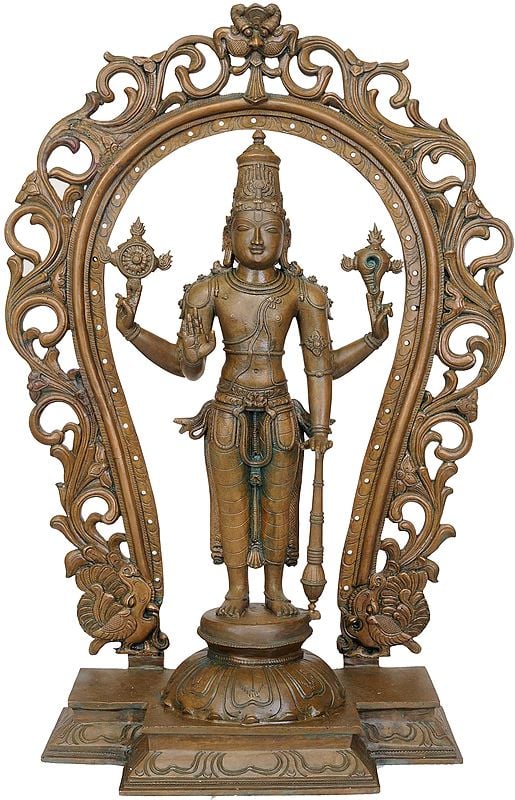 $1295
Quantity
Notify me when this item is available

This bronze, a contemporary artifact but reminiscent of the classical tradition of the ninth-tenth century South Indian bronzes cast in exact idiom of Chola and Chalukyan bronzes, one of the toughest mediums but yielding soft stone like details, precise and technically well accomplished, represents Lord Vishnu – one of the Trio-gods of Hindu pantheon, other two being Brahma and Shiva, in his Chaturbhuja – four-armed manifestation. The image, standing straight in the commander’s posture, abounds in a king’s majesty though not without the divine aura of the deity. An outstanding example of India's centuries old tradition of metal-casting, continuing incessant, the image reveals same quality, iconographic perfection, zeal for details, purity of form, embellishment in such degree as essential, elegance and finish, emotional bearing, and commitment to scriptural tradition – all as revealed the best of Chola or Pala bronzes. Like these early bronzes in which a figure was gesticulated for revealing an emotional bearing or a motive, this contemporary image has been made to reveal a commander’s readiness, formidability and a determined mind to attend to and resolve any emergency. In his proto manifestation Lord Vishnu is represented mostly either as standing straight or as reclining on the coils of the great serpent Shesh, though being four-armed, the former is better known as Chaturbhuja Vishnu, while the later, as Sheshasana or Sheshasayi Vishnu, one representing him in act, while the other, as resting – one who redeems by his act, while the other, by his mere presence. His imagery abounds in great mystique especially his standing image – as this bronze-cast. In such images he appears to lean upon his mace as also as making a forward move with one of his feet put ahead of the other though neither his figure bends over his mace nor his foot actually moves; it is often modeled to appear as doing something that it does not. Besides the mode of holding the mace, ordinarily a mere symbolic attribute and rarely a tool of war, the upwards pulled eyebrows, the fully stretched eyelids and a determination readably writ on his face characterize the image of Chaturbhuja Vishnu. He is represented essentially as the cosmic commander who commands for order, curves evil and promotes good. In his Chaturbhuja – four-armed, manifestation Lord Vishnu’s role as cosmic commander best reveals. It is not just the assurance of protection that this image of Lord Vishnu makes by granting ‘abhay’ – freedom from fear, with the gesture of one of his hands, this assurance is multiplied three times when it is supported with the strength of his unfailing attributes – mace, conch and his ultimate weapon ‘chakra’ – disc, that he carries in his other three hands. Besides the gesture of ‘abhaya’ his normal right hand has been conceived with the symbol of lotus on its palm. An essential element of Vaishnava imagery his arms-band-plaques have also been designed with the lotus motif. With his wide-stretched eye-lids his eyes look like lotus-petals giving Lord Vishnu ‘Kamala-nayana’ – lotus-eyed, name. Though a piece of jewelry, his image has been conceived with ‘makara-kundalas’ – ear-ornaments with their main component designed like a crocodile – another essential feature of Vaishnava imagery.    The image has been raised over a pedestal consisting in two parts, each two-tiered representing the known and the unknown worlds that Lord Vishnu pervades. The bottom part consists of a rectangle base composed of conventionalized lotuses. It tapers in upwards rise and is topped by a plain but beautifully chamfered highly finished top. Over the projected front of this base unit is erected the proper lotus seat. It has been modeled like a bowl turned upside down the base unit of which – a plain roundel, holds over it the deity-image. As over the lotus seat is raised the deity image from the base unit of the pedestal’s two rectangular ends rises the fire-arch that the image of Lord Vishnu enshrines. The fire-arch rises over the icons of stylized peacocks on both sides and is topped by a ‘kirttimukha’ motif. With the towering crown the image of Lord Vishnu acquires a far taller and robust form. The image has been conceived with a round face, sharp nose, lotus-like eyes, small cute lips, well fed cheeks, a well-defined neck and a highly balanced anatomy. Besides a fine ‘antariya’ – lower wear, the image has been enormously bejeweled, the laces over his waist being excitedly captivating.


This description by Prof. P.C. Jain and Dr. Daljeet. Prof. Jain specializes on the aesthetics of literature and is the author of numerous books on Indian art and culture. Dr. Daljeet is the curator of the Miniature Painting Gallery, National Museum, New Delhi. They have both collaborated together on a number of books.
Add a review
Have A Question