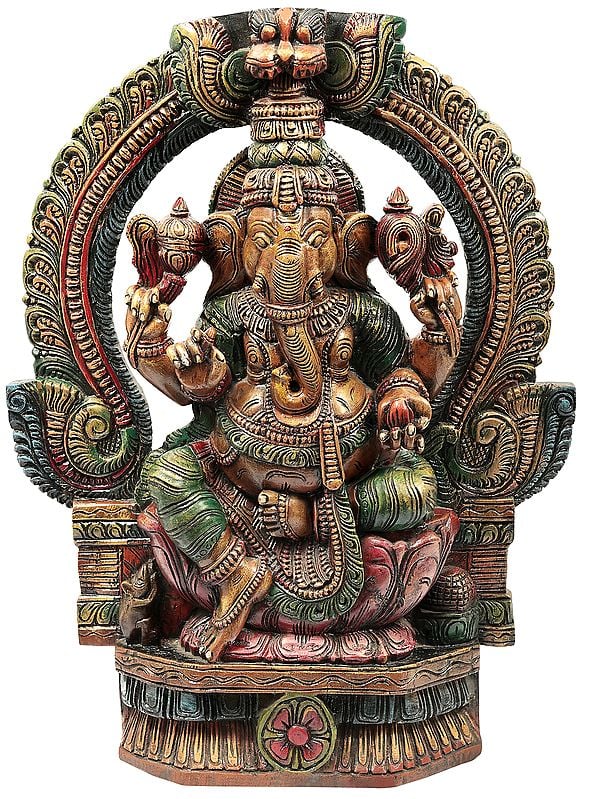 Lord Ganesha is a widely worshipped god in Hinduism. He is depicted with his elephant head and the human body. The prayers are offered to the Lord Ganesha before the commencement of any important enterprise, he is patron to writers, bankers, and intellectuals. His vehicle (vahana) is a bandicoot rat that sits near his throne that symbolizes the willpower of achieving anything in life. Lord Ganesha’s idol is placed at the entrance of the house, office, or institute as it attracts positivity, peace, and prosperity in the premises.

Exotic India presents an exquisitely carved wooden statue of Lord Ganesha with Kirtimukha on top and prabhavali (aureole) around the Lord to enhance his grandeur and glory. He is seated in lalitasana wherein his left leg is placed on the lotus throne and his right leg touches the base. The large protruding belly reflects the generous nature and total acceptance. On top of the finely carved crown is the motif of Kirtimukha (a ferocious monster with swollen eyes and large fangs). He absorbs away the negativity and keeps the evil eye at bay. The upper torso is decked up with fine jewellery. The chaturbhujadhari (four-armed) deity holds sweet modak in his lower right hand representing bliss of spiritual pursuits, pasha (noose) in his upper right hand indicating control on the wavering mind, Ek Dant (broken tusk) in his lower left hand endowing patron of letters and Ankusha (Goad) symbolizing the strength to steer his devotees from the treacherous path. The superfine carvings on the aureole, tusk and lotus petals are remarkable. The enchanting statue of Lord Ganesha with Kirtimukha will always protect your family and loved ones.