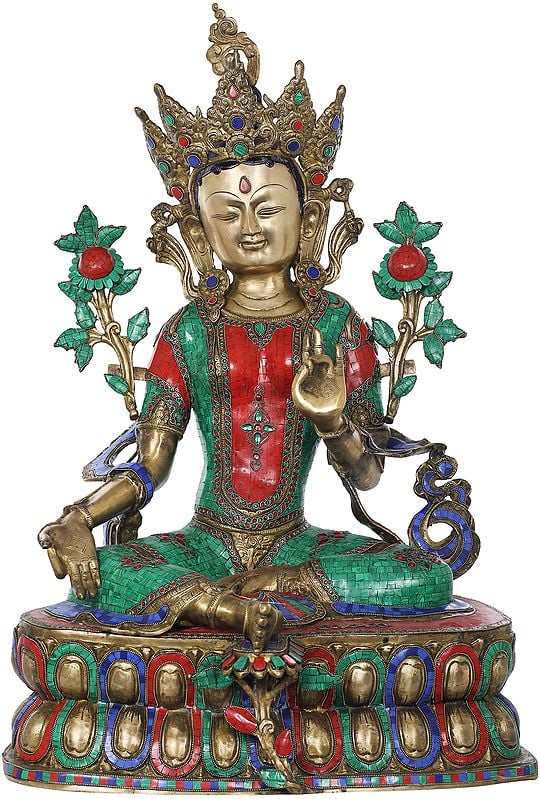 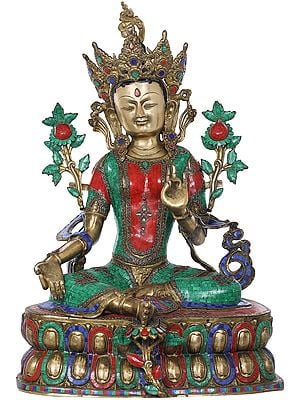 $2125.00
Devi Green Tara is the most popular of the twenty-two manifestations of Devi Tara (together with Devi White Tara). Identified as the twenty-second Devi of the pantheon, Her name is Khadiravani because She belongs to and is the saviouress of the acacia (khadira) forest (vana). As could be seen in this brass murti, She is a stately yogini with a form as tall and slender as befits a Mahayana bodhisattva. An unmistakable part of the Emerald Tara iconography is the right foot resting on the stigma of a lotus flower. The one in this composition has been carved out of the lotus pedestal on which She is seated, its leaf-laden stem curving down the frontal midline. She is in a robe of bejewelled crimson and aquamarine, set off by deep blue sashes of delicate fabric floating about Her torso. In addition to the sashes, the luxuriant stems of verdure blooming on either side of Her, the kundalas (danglers) in Her karna (ears), and the wisps of vine that frame Her face are examples of symmetry.

A gorgeous crown sits on the shining black locks of the beauteous Emerald Tara. Quintessential to the iconography of Tibetan Buddhist deities, it is an intricately carved five-spired number. The same is studded with the finest emeralds, rubies, and sapphires that convey the glory of the Khadiravani Bodhisattva. A pale ruby on Her fair brow is indicative of the Enlightened status of the Bodhisattva’s being.