The Glory Of Lord Nataraja 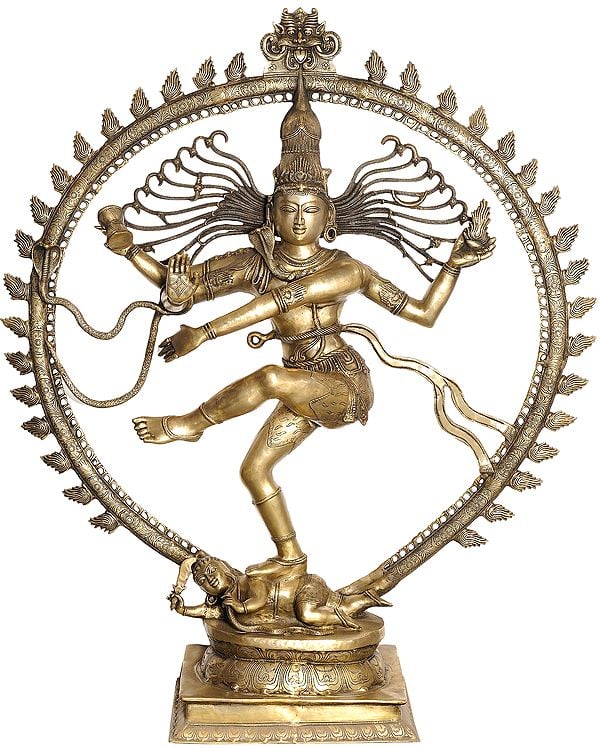 $7995.00
The stance of Lord Nataraja is straight from the Natyashastra. The classical Indian text (shastra) on the performing arts (natya, which literally translates to dance) is the definitive authority on creative expression, from which the Indian performing arts keeps deriving to this day. The name Nataraja translates to king (raja) of natya, a key manifestation (roopa) of Lord Shiva. It is His natya that wields destruction over life and in turn projects life anew, such is the grace of Lord Nataraja.

The majestic Lord Nataraja that you see on this page has been sculpted in keeping with the Natyashastra exposition. Chaturbhujadhari (four-armed): the anterior left hand in gajahastamudra (elephant-hand-gesture); the right in abhayamudra (fearlessness-gesture), with a snake coiled aptly around the arm. In the posterior hands are the damroo, from which emerges the naada (cosmic sound) of srshti (creative projection), and a ball of flame that leads to annihilation of all srhsti. In fact, a ring of flames constitutes the aureole of the destructive deity.

Apasmara is a crucial aspect of the Lord Nataraja iconography. A dwarfed and epileptic demon, he stands for avidya, that which leads to adharma. And while adharma must be destroyed, avidya must be subdued. The glory of Lord Shiva prevails because He remains in His Nataraja-roopa, dancing over avidyaroopi Apasmara, continually shoving him underneath His powerful foot.