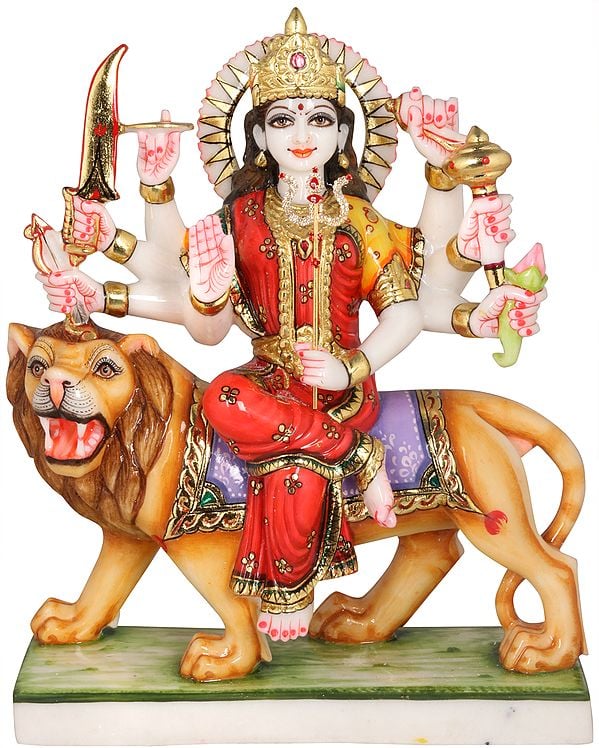 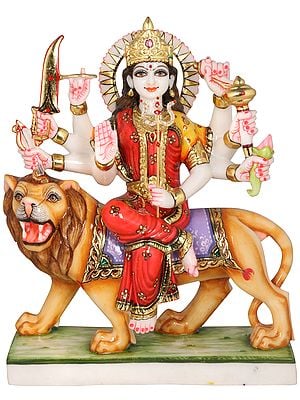 This goddess of Navratri symbolizes the triumph of good over evil in a celebration of nine days tenure, followed by Dussehra. Durga Maa is the giver of power and strength as she is the supreme Shakti with her eight hands carrying the behavioral lethal weapons. She is the feminist power and positive energy in a tag of the goddess of war and divine light to protect devas.

She sits on the ever-so-ferocious lion, representing will, determination and mastery over all the qualities in her bold Abhaya Mudra posture, holding her sacred weapons, namely (right to left), sword- signifies intellect and wisdom, dhanush and tir- representing people’s focussed aims, trident- representing past, present and future, lotus- for devotion and surrender, club- to kill the evil without any fear of consequences and a conch- the sound of Aum that originates from it has the power to destroy all the negative energies.

Garbed in perfect red silk with gota patti flower motifs and an astounding border with rich jewels that accentuate her aura of godliness. The sun haloed crown glows with pride on her thick hair. Eyes and lips expressed in a soothing, calm and composed aspect, in a solid contrast to the savaged eyes of her vahana.