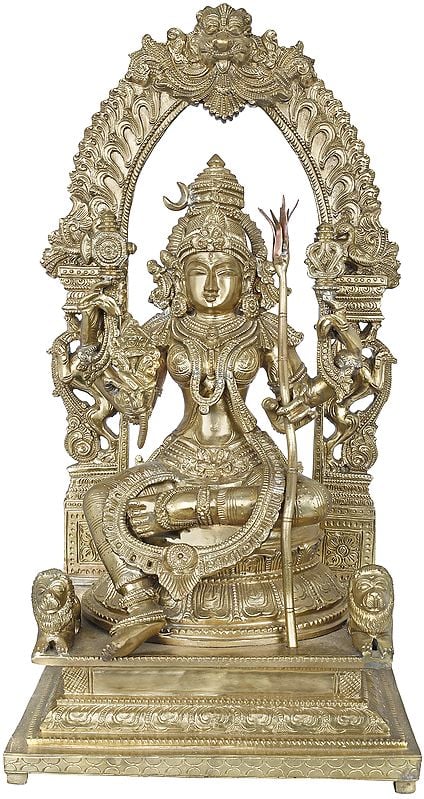 Tripura Sundari is the Hindu goddess glorified as one of the ten Mahavidyas and Shakti (consort) of Sadasiva; she is the supreme consciousness who rules over the Trinity (Shiva, Vishnu and Brahma) and is associated with Shakta tantric tradition. She is also known by the name Rajarajeshwari (‘Raja’ means the eight lords governing directions of the universe and ‘Rajeshwar’ is the Trimurti), depicted here in a splendid form of Cosmic Mother, as is also mentioned in Sri Lalita Sahasranama. The goddess is sculpted here in a refined bronze by expert artisans of Bangalore from where bronze art had set a new benchmark in the history of art and metallurgy.

The precise and superfine carvings highlight the beautiful and distinctive Hoysala art form featuring inventive decorations and stylized ornamentations. She sits in lalitasana on a lotus pedestal, placed on a distinctively carved multilayered throne topped with lions perched on either side on the platform and a Kirtimukha prabhavali chiseled in intensive beguiling floral patterns. Chaturbhuja goddess holds her iconic weapons in all the hands and the sweet sugarcane stick held in the front hand represents a person’s mind and the five shoots at the top are symbolic of the five senses through which mind is influenced and functions accordingly.

Rajarajeshwari is garbed in an ankle length dhoti and an ethnic kamarband ornamenting her waist in the most beauteous ways. Zoom in to the image to have a keen look at the sharp facial features and precious treasures embellished all over on her body; the haloed long crown that glorifies on her head is etched in marvelous layers of designs along with a crescent moon decorated on the right and the third eye on forehead symbolizing her consort’s iconic presence.

Free delivery
Add a review
Have A Question