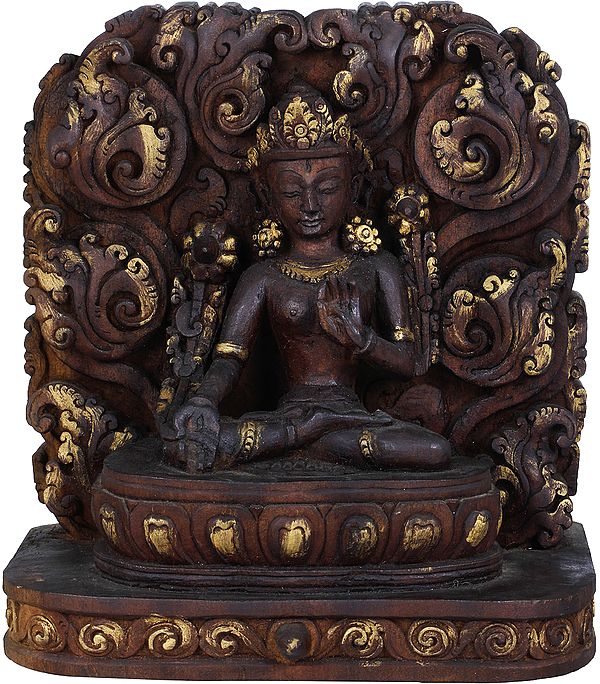 A manifestation of Chinese princess Kongjo and an important figure in Buddhism, White Tara is a female Boddhisattva in Mahayana Buddhism, also known as the ‘Mother of Liberation’. She is associated with longevity and counteracts illness, thereby bringing about a long life.

As shown here, White Tara is always depicted as sitting in a lotus posture with the soles of her feet pointing upwards, left hand is in the protective no fear mudra and right forms a wish granting gesture. White is considered to be the supreme color in many traditions as it is said to contain all colors within itself, so White Tara is also the most powerful of all Taras, as she embodies them all.

Two lotuses can be seen emerging out from the left and right hands, wherein the one blooming from the former is the blue lotus of fearlessness and energy and latter one is the pink lotus of purity; sculpted with seven eyes (two each on feet, two each on palms and one on forehead) representing her vigilance on all human sufferings and a realization to the energies in and around her devotees, therefore, also revered as ‘ The Goddess of Seven Eyes’

Apart from spirituality and iconography, what attracts the most is the exotic use of colors in this statue and the distinctive backdrop heavily carved in spiralled vines and flower structures with tinges of gold to highlight the mains.