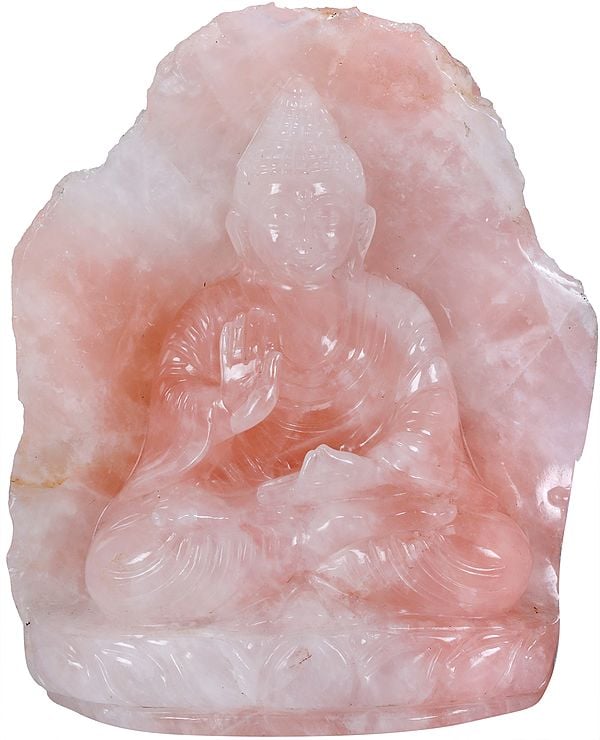 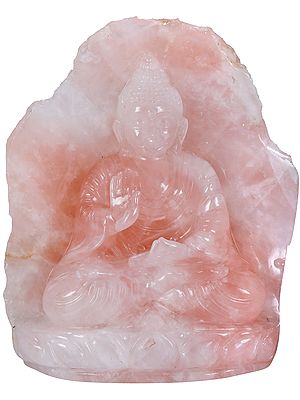 $595.00
A keenly discernible silhouette of the Buddha emerges from a block of rose quartz resembling a cave. As compact as it looks, it is more than a handful; a substantial stone sculpture that would add to the gravity of the space you choose to install it in. There is nothing striking about the colour - in fact, the colour palette comprises soothing natural tones of white and rose, which befit the demeanour of the subject.

The erstwhile Shakyamuni attained enlightenment after decades of wandering and asceticism and mendicancy. The chhavi (image) of Him that you see on this page is of the Enlightened One. He is seated in a gentle padmasana, the point of culmination of the total practice of asanas. The left hand rests on His lap, the fingers gathered in the dharmachakra mudra, while the right hand is raised in generous blessing to all those who seek it from the bottom of their hearts.

Despite the seemingly rudimentary finish of the sculpture, there prevails unputdownable coherence and proportion of detail. Note the series of delicately carved lotus petals at the very bottom which form an asana (seat) for Lord Buddha. As the eye moves progressively upwards, one observes the conspicuous pleats of His robe, the distinguished digits of His feet and hands, and the features of His calm face.