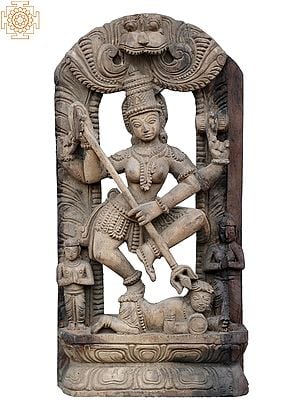 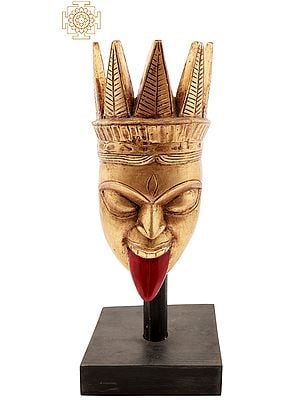 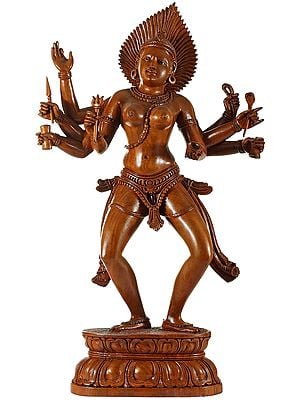 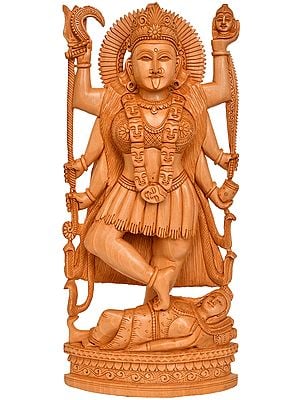 She Who is Fierce, The Warrior and The Destroyer Of Evil, Goddess Kali

Although Kali is depicted in a wide range of ways all through South Asia, she is most commonly photographed as black or blue, entirely or partially naked, with multiple arms, a girdle composed of human arms, a necklace made of severed heads, and a severed head in one of her hands. She is commonly depicted dancing atop of the Lord Shiva, who is shown resting on his back beneath her. According to the Devi Mahatmya, the goddess Durga's wrath caused Kali to appear and kill the demonic Raktabija. Each drop of Raktabija's blood that touches the earth during the struggle triggers the creation of a new monster; to prevent this, Kali collects the blood up before it reaches the earth. Furthermore, it is believed that she was born when Goddess Parvati abandoned her dark skin; the sheath transformed into Kali, who is also referred to as Kaushika, "The Sheath," having left Parvati in the guise of Gauri ("The Fair One").

The Hindu goddess of apocalypse, time, and death is recognized as Kali. She is typically linked to abuse and sensuality, but she is also regarded as a wonderful mother and a symbol of maternal love. In a different interpretation, the gods instructed Parvati to deal with the bothersome evil spirit Daruka, who was tormenting civilization and gods and had to be destroyed by a woman. She responded by striking Shiva in the throat. This was due to the fact that many years prior, Shiva had ingested halahala, the poison that had threatened to poison the planet at the creation and had risen from the churning of the ocean. Parvati became Kali by combining with the poison that was still lodged in Shiva's throat. In her new disguise, Kali quickly dispatched Daruka after leaping from Shiva's throat, and everything was well with the world once more.

In masterpieces, Kali is usually portrayed in her feminine form as exhibiting blue or black complexion, being naked, and adorning a clay crown similar to one from Bengal which has been decorated or gilded. She has several arms, varying from four to eight to ten to twelve or even eighteen, like so many other Hindu goddesses. Each arm usually carries an accessory, which could be a whip, noose, bell, shield, cup, drum, chakra, lotus bud, sword, dagger, or trident. Her right hand will periodically perform the giving varada mudra while her left makes the abhaya mudra. She regularly appears sitting with her legs.

One early founding tale of Kali concerns Durga/Devi, who made Parvati, a stunning and collected goddess, to aid in combating and restraining evil spirits. When confronted by the demons, Parvati confidently rushed into combat, but she wrinkled her brows and her rageful avatar, Kali, materialized. The Hindu goddess of apocalypse, fate, and death is named as Kali. She is frequently associated with aggression and sensuality, yet she is also portrayed as a strong mother and a metaphor of motherly compassion. Parvati, the wife of the mighty Hindu god Shiva, is embodied by Kali as the manifestation of shakti, or feminine energy, innovation, and reproduction.

Q1. What are the religious symbols of Goddess Kali?

Blossoms, dance, iron, swords, peacock feathers, and honey are some of her symbols. The Hindu goddess Kali, whose name means "time," is the mother of the forces of nature that either produce or annihilate. She does, however, serve as an example that perhaps horrific things do turn out for the best.