Our Country has a very rich literary heritage of which we are all proud. The former States of Rajasthan have contributed substantially in collecting a treasure of varied literature in Sanskrit, Prakrit, Hindi and Rajasthani. Distinguished poets like Maagh, Jagjeewan Bhatt, Miran Bai and Bankedas were born in Marwar and earned national acclaim. It is the sacred duty of our present generation to bring to light this inspiring literature and the cultural richness of this Region which hitherto has been sadly neglected. I am happy to note that some Institutions of Rajasthan have already done useful work in this direction and I hope that 'Maharaja Man Singh Pustak Prakash' will also be a valuable facility for students and Scholars to familiarise themselves with the cultural heritage of this Region.

`Maharaja Man Singh Pustak Prakash's' first Publication `Ajitodaya Mahakavya' which has great historical importance is being released in a suitably edited fashion to simplify research work. I thank all those who have assisted to make this a successful literary venture. I am confident that under the able guidance and direction of Dr. N.S. Bhati who is a seasoned scholar and a distinguished poet, the 'Maharaja Man Singh Pustak Prakash' will expand its scope of activities to fulfil its noble aims.

Among the historical sources of Medieval India Sanskrit works have their own importance. The "Rajtarangni" of Kalhan "Prith-viraj Vijaya" of Jainayak and the "Hamir Mahakavya" of Naya Chandra are well known published works of eminence. In this tradi-tion of Sanskrit historical classics "Ajtodaya Mahakavya" is a notable work which has not only kept this tradition alive but has added much to the local sources of Rajasthan history in particular and later Moghul in genera1,1 The Author of the poem Pandit Jagjeewan Bhatt was a contemporary of Maharaja Ajit Singh of Jodhpur (1706 to 1724 A.D.) and most probably he enjoyed the patronage of the Maharaja, Like other Sanskrit works, this work also has its own traditional way of expression. It is full of cultural value mixed with local heroic sentiment and aroma of Rajput chivalry inspired by the selfless spirit of sacrifice. This Epic poem has covered a large range of events of Moghul, Maratha and Rajput history.

It depicts in detail the conditions that prevailed in Marwar after the sudden death of Maharaja Jaswant Singh I in Jamroud and the attitude of the Emperor Aurangzeb towards the question of succession in Marwar. Maharaja Jaswant Singh died issueless and Inder Singh the grandson of Rathore Amar Singh (son of Gaj Singh) was aspiring for the ‘Gadi' of Marwar when the two sons were born posthumously to the Jadam and Naruki Ranis of the late Maharaja while the family was travelling to Delhi. The Emperor insisted upon bringing the newly born Rajkumars to Delhi to keep them under his custody till they became major. This development caused the situation to become even more tense. The poem narrates with minor details the steps which the Rajputs took to meet this delicate situation and how Raj Kumar Ajit Singh was removed to a safe place by the loyal Rajputs. After that the poem depicts the long struggle that was .launched by the Rajputs of Marwar against the mighty power of Emperor Aurangzeb and the way it ended in success after many battles under the leadership of Veer Durga Das etc. The Historians while dealing with Rajput history always apprehend that the Rajputs lacked the planning skill and the ability for mutual co-operation. But this poetic work narrates such evidence whieh proves beyond doubt that they had the capacity to rise to the occassion for the cause of freedom and could do the biggest sacrifice.

As a matter of fact, the Rajputs have always shown their true worth in the darkest and most difficult times of Indian history when the cultural value and self respect were at stake. This poem highlights this spirit in its true sense. This work deals with the events of the period from 1674 to 1724 A.D. and its major part covers the struggle of Marwar Rajputs to regain the freedom of Marwar from the clutches of Emperor Aurangzeb and to put Maharaja Ajit Singh on the therone of Marwar as the legitimate heir of Maharaja Jaswant Singh. The vivid narrations of the poem have many peculiar features which attract the attention of a keen historian. I mention a few of them here.

1. The poet has always mentioned the names of the heroes of Marwar (with their caste and sometimes father's name) who fell fighting in different battles. The names of the Mughal Officers who were killed by a particular Rajput warrior are also casually mentioned.

2. Some of the historians believe that the Ranis of Maharaja Jaswant Singh who were taken to Delhi were burnt to death or were slain when the Rajputs retreated from Delhi to escort Raj Kumar Ajit Singh to a safe place. But the poet clearly mentions that the Ranis fought bravely with other Rajputs and died in the battle.

3. The Bhils of the hilly areas helped the Rajputs in this struggle and took part in some of the battles.

4. The Rajputs generally looted the Imperial treasury of Gujarat that used to pass through Marwar en route to Delhi. That was also a reason why the Emperor eventually agreed to give Jalore to Ajit Singh and calm the Rajputs.

5. Durga Das himself went with prince Akbar to Sambhaji in Deccan. After some time he (Akbar) wanted to return to Marwar but could not succeed because of the unsafe journey and the constant vigilance of the Moghul Army.

6. All marriages of Maharaja Ajit Singh have been carefully narrated in proper sequence which show the graphic development of the power and fame attained by Ajit Singh and how matrimonial relations affected the politics of those times.

7. The poet has also successfully depicted the required qualities of a Ruler and the duties of a Subordinate. He does this through the dialogue of mother of hider Singh on the occasion when Ajit Singh attacks Nagour to subjugate Inder Singh.

8. The court intrigues at Delhi for usarptipn of power after Jhe death of Aurangzeb and the role of Sawai Jai Singh and Ajit Singh at that time has also been depicted in detail.

I have restricted these points only to some specific features. A keen scholar will find the work useful in many ways relating to the social, economic, political and cultural conditions of those times. Jag Jeewan Bhatt is a Maha Kavi in the true sense of the term because he knows how to put facts in their right prospective without detracting from the beauty of the poetic imagery. He brings the narrations to life by the effective use of appropriate similies and metaphors. His language is lucid and simple but his composition is not free from grammatical flaws. At places the editor has taken liberty to remove the flaws. This historic work is the first to be published under the 'Umaid Oriental Series' and the main credit of this achievement goes to late Pandit Nitya Nandji who edited this work long ago with great devotion and poetic insight because he himself was a gifted poet. His services to Pustak Prakash' are also unforgetable because he looked after this valuable treasure with immense care for a long time and prepared a detailed stock register of the manuscripts.

Thanks are due to Mr. Laxmi Narain Goswami who saw this classical work through the press with care and diligently prepared its appendices.

I am much indebted to Maharaj Prahiad Singhji, Manager, Mehrangarh Museum Trust, Jodhpur for his encouragement and valuable support at the administrative level which made it possible to publish this work in the present form.

I also express my gratefulness to Major Jaswant Singhji (Trustee) for his valuable suggestions and encouragement to take up important literary works for publication under the various series of the Institution and to reorganise and develop the Institution in the form of a Research Centre.

Before I close, I express my deep gratitude to Maharaja Sahib Gaj Singhji II of Jodhpur (Managing Trustee) whose initiative alone could create the scope for the development of the Pustak Prakash library into a Research Centre to bring to light these priceless classical works. r am sure his immense love for the literary and cultural heritage of this region and his generous attitude towards cultural pursuits will go a long way in making this Institution an important seat of learning. 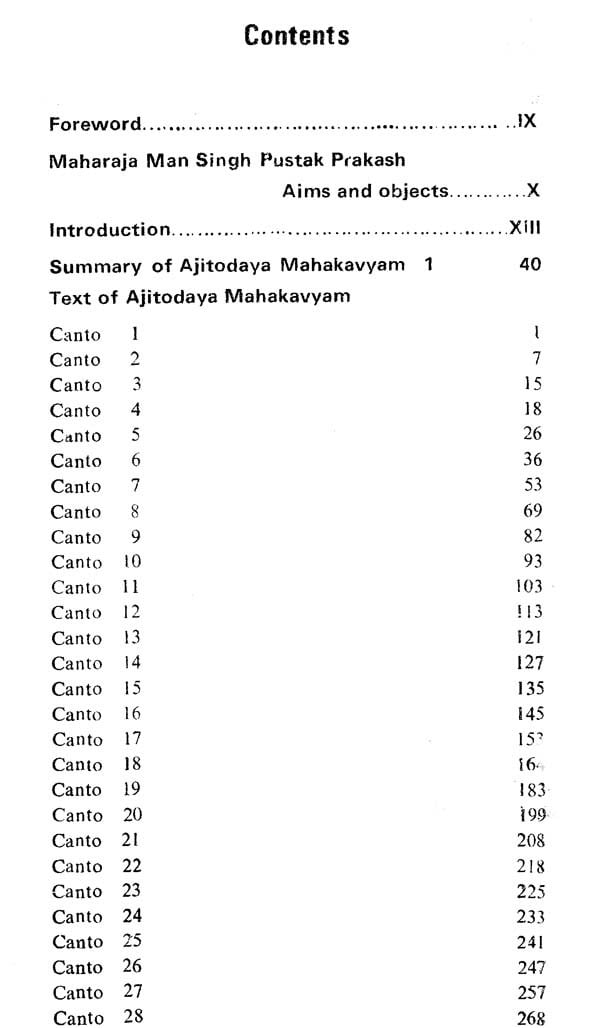 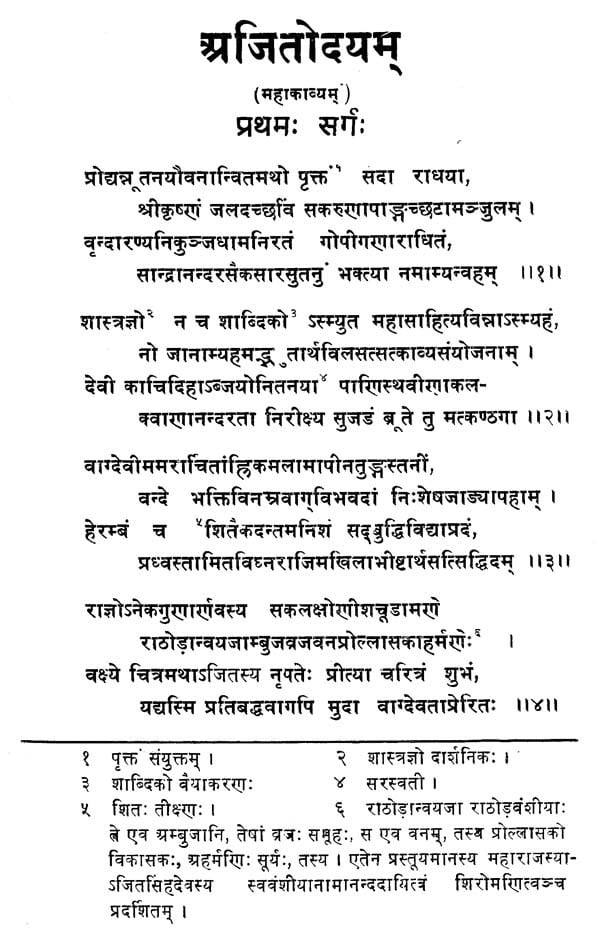 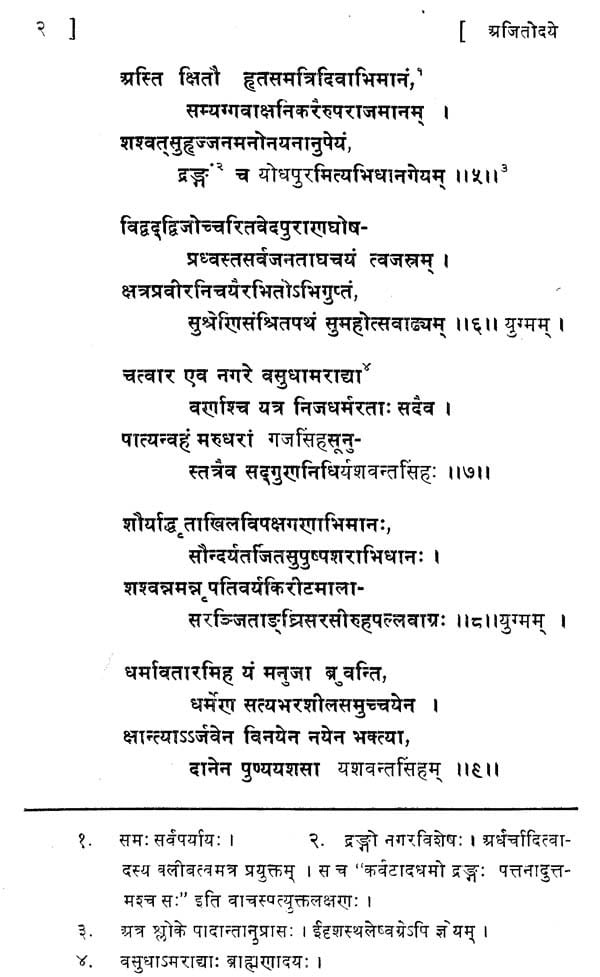 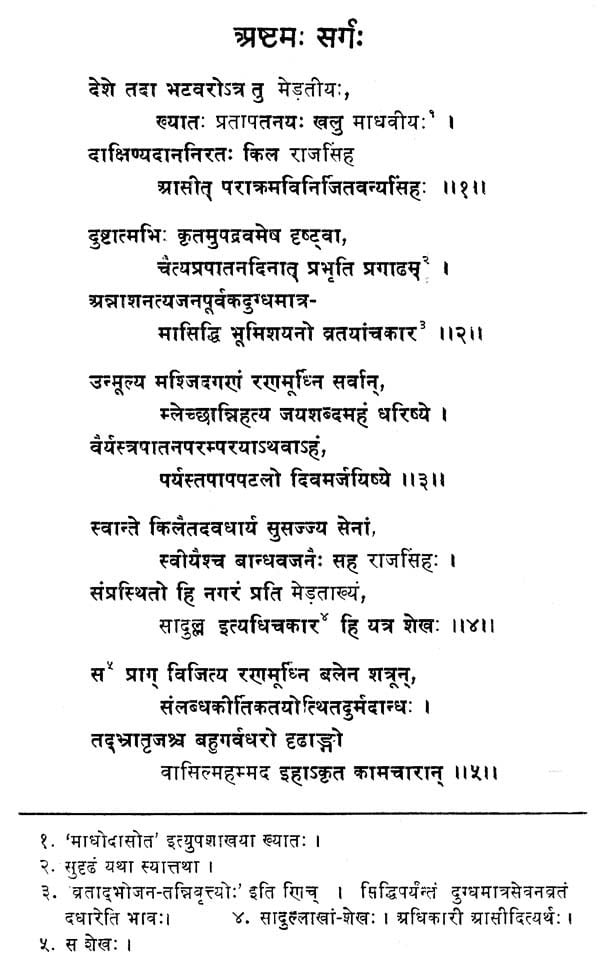 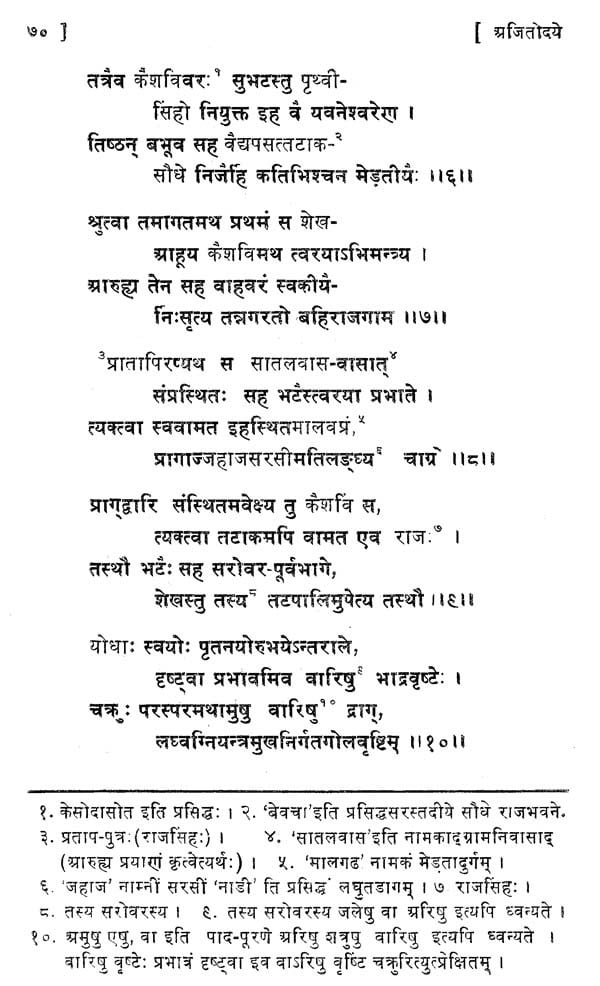 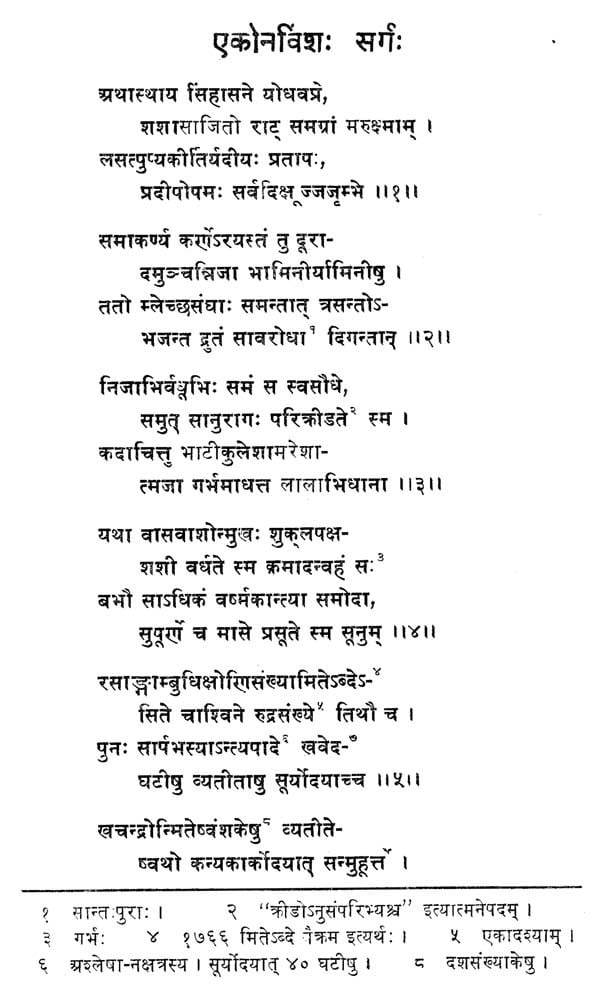 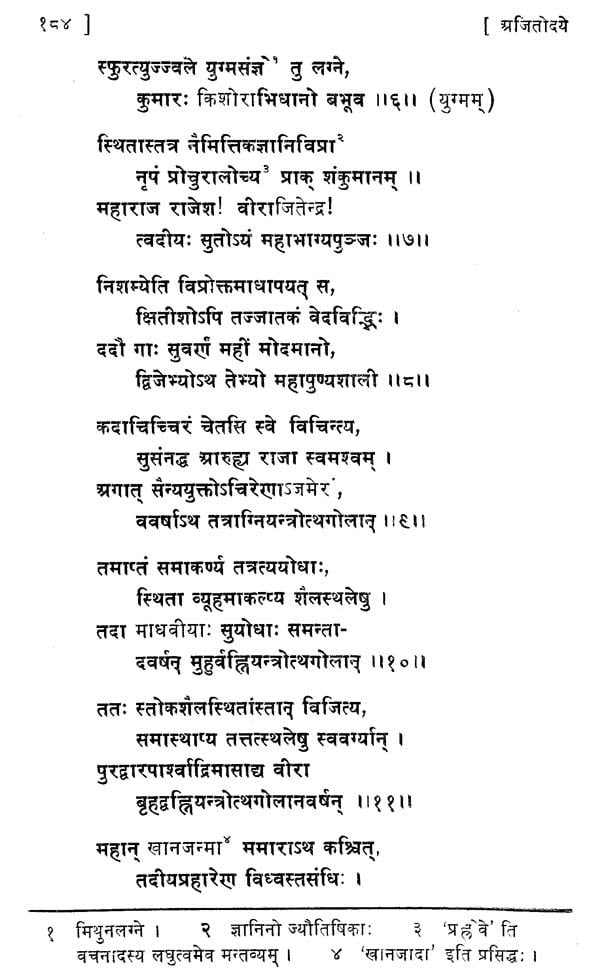 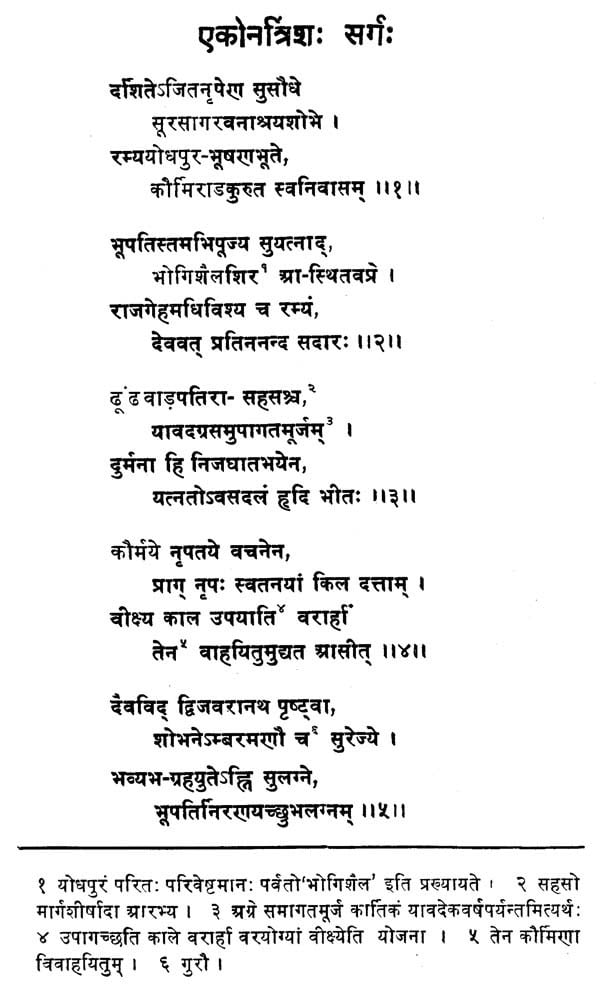 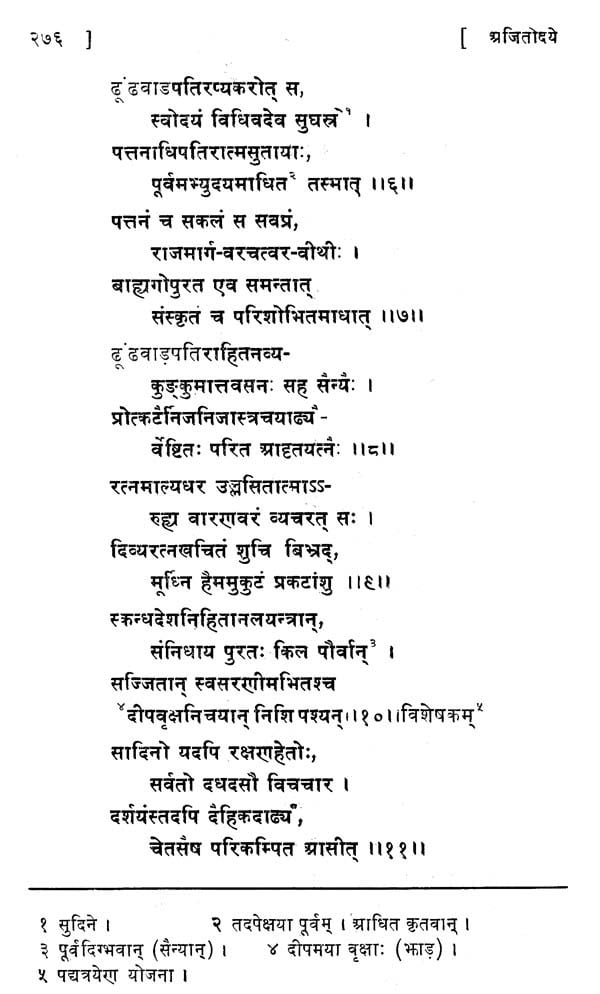