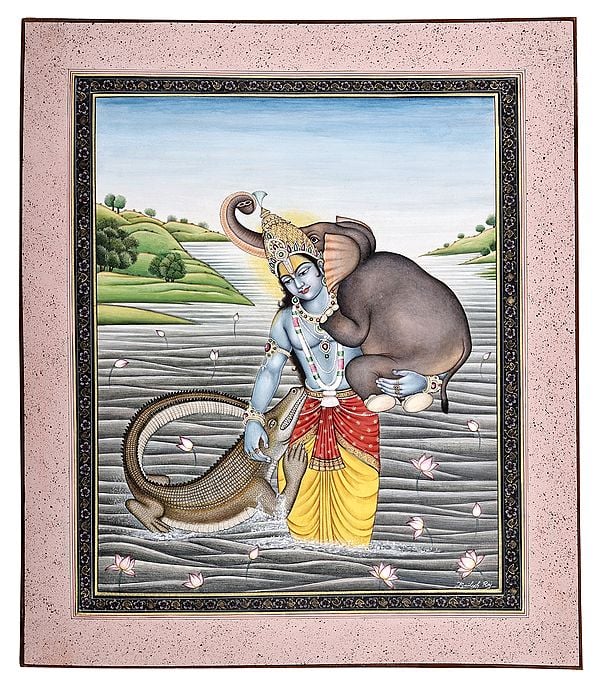 The legend of Gajendra Moksha, or the divine liberation (‘moksha’) of the finest (‘indra’) of the elephant (‘gaja’) kind, was first narrated to King Parikshit by Sage Shuka and recorded in the sacred Bhagavata Purana. It is the tale of how Lord Vishnu emerged in ihaloka to the succour of Gajendra, His devotee, who was caught in the fatal clutches of a crocodile. The watercolour that you see on this page depicts the Lord separating the crocodile from the elephant whilst knee-deep in the lake.

The twilight-skinned deity is clad in red and yellow silks. He wears a garland of fresh flowers in addition to gold jewellery studded with rubies, emeralds, and pearls. He cradles Gajendra in His left arm, who buries his innocent face in a mass of black curls cascading from the rim of His crown. The now-vanquished crocodile clings to the Lord’s feet in His hour of defeat.

The charcoal-coloured waters of the lake convey ominousness. Consistent, textured brushstrokes punctuated by miniature blooms of pale-petalled lotuses. Hints of Ṛtumat in the background, the sprawling verdant garden of Lord Varuna over which ruled Gajendra. Shortly after this episode, the elephant-king attained to moksha by the grace of Lord Vishnu.

Fair trade
Add a review
Have A Question