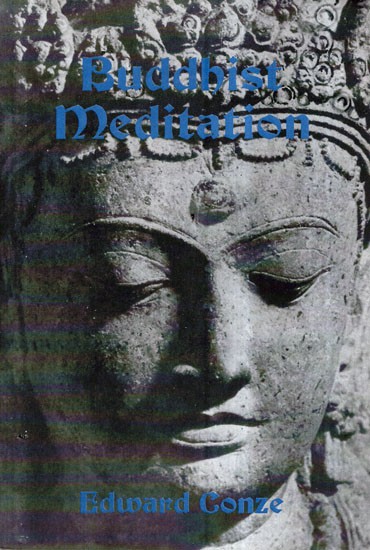 Meditational practices constitute the very core of Buddhist approach to life, meditation is the heartbeat of the religion. The ultimate aim of Buddhist meditation is Enlightenment, or the state of Nirvana. The Nirvana leads to detachment of soul from the body, making it imperceptible to worldly pains and pleasures, and bringing in a sense of selflessness.

Meditational practices constitute the very core of the Buddhist approach to life. An intensely practical religion, Buddhism is by contrast inclined to treat doctrinal definitions and historical facts with some degree of unconcern. As prayer in Christianity, so meditation is here the very heartbeat of the religion.

Enlightenment, or the state of Nirvana, is, of course, the ultimate aim of Buddhist meditations. On the way to Nirvana they serve to promote spiritual development, to diminish the impact of suffering, to calm the mind and to reveal the true facts of existence. Increased gentleness and sympathy are among their by-products, together with an opening up to life's message, and a feeling that death has lost its sting. The intended result is stated quite clearly in the verses by which the monks of old testified to their attainment of gnosis (anna). These poems mirror for us the aims of the monks, together with the occasion of the final insight which may spring from any of the meditations outlined in this book. For in them the monks 'tell of the good they have won (attha), without bringing in their own ego (atta).'

There is, first of all, a deep sense of the perishable nature of all that exists, and a desire not to become again. 'Nowhere is there any permanence in becoming, and there is no eternity about conditioned things. The skandhas rise, and then dissolve again. Now I know that this is a reason to feel perturbed. No longer do I seek for further becoming. Freed am I of the objects of sense. All my blemishes are now extinct.' So Uttara's testimony (Th 121-2). Vitasoka, when he had his hair cut, saw that a few had turned grey. This revealed to him the insignificance and triviality of his body,—the darkness vanished from his spirit, and he won through `to a state from which there is no more coming back to be' (v. 17o).

In their 'Lion's Roar' these monks often speak of the freedom from anxiety and fear which they have gained. As Sambula-Kaccana has it, 'So has my nature been transformed by the Dharma that, dwelling alone in this fearful cave, I have no dread, and feel no terror and no consternation' (v. 19o). Or, to give as a final example the words of Khitaka (v. 192) :

`My heart stands like a rock, and swayeth not,

Void of all lust for things that lust beget, And all unshaken in a shifting world.

My heart thus trained,—whence shall come ill to me." This is the goal of Buddhist meditation as described by the Indian Buddhists themselves.

In other countries things were expressed differently. So we read in Tao-ngan (314-385), a Chinese author, that 'the plane of the practitioner of Yoga is the mysterious hall in which are assembled those who are attuned to the truth. It is the secret chamber of the immortals who prepare themselves to ascend to Heaven. Hard to climb is this expanse of Non-production, because it is to sublime ; hard to cross is this rampart of Non-action, because it is so immense. Through the tiny door, through the mystic opening, the inner court can barely be seen at all. The absolute truth is like the ocean ; each day you may bowl out some water, and yet you can never exhaust it. Even so, although countless efforts are made to cause the essence to return to its source, no one can ever fully succeed in doing so. This absolute truth contains the infinite, it is calm, it seems to exist, but cannot be expressed in words. After he has realized it, the saint expounds a teaching without words, he dispenses peace, and reveals insight.” This allusive, poetic, and slightly cryptic mode of expression is clearly influenced by Taoism. It is on the basis of his Chinese experience that Reichelt can define meditation as 'a devout reflection about the inmost and highest powers in the universe' (p. 19), as 'the quiet and devout consideration of life's inner meaning, the listening to the voice of Heaven in the soul' (p. 63). Others again define Buddhist meditation as a training which aims at `satori,'—the intuition of the totality of reality as concentrated in one particular object. Different temperaments and different cultures are indeed bound to react in different ways to the demands ' of these practices. It would lead us too far here to enumerate all the possible variations, and we now proceed to discuss the central tradition behind them all. 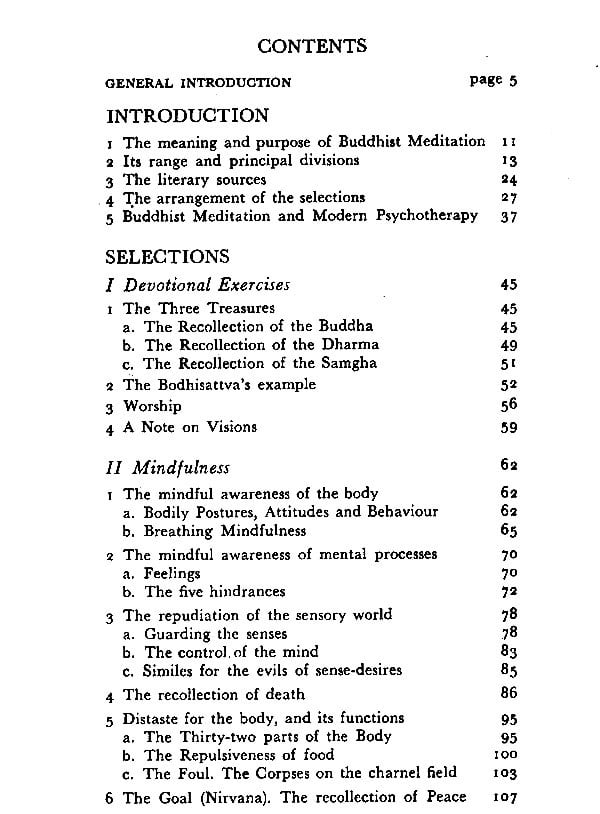 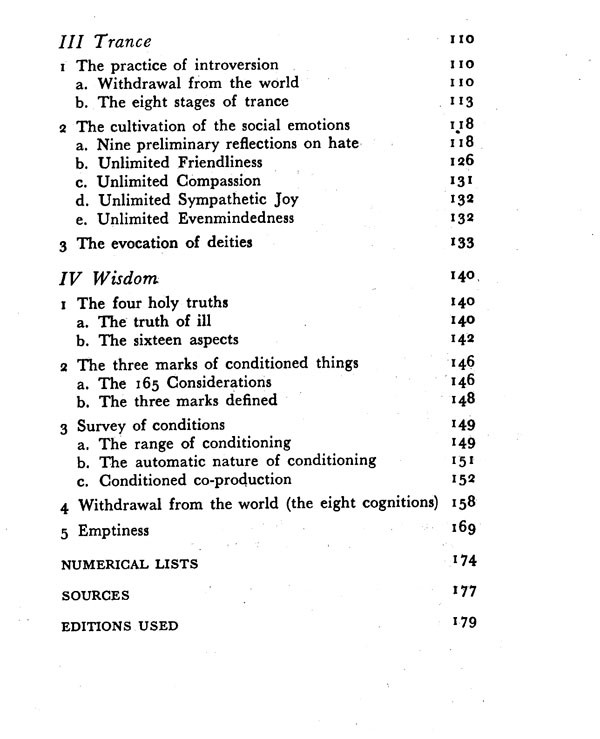 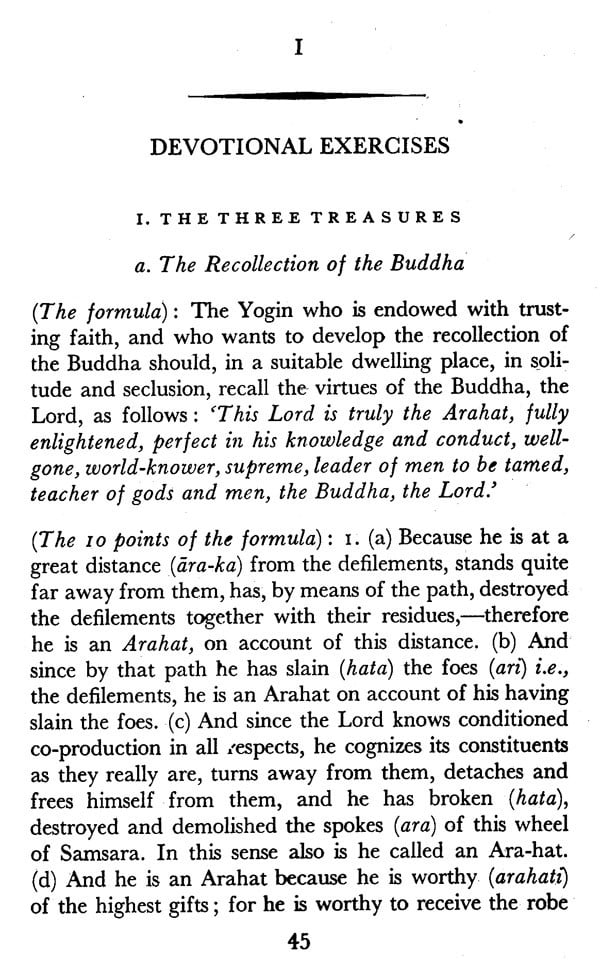 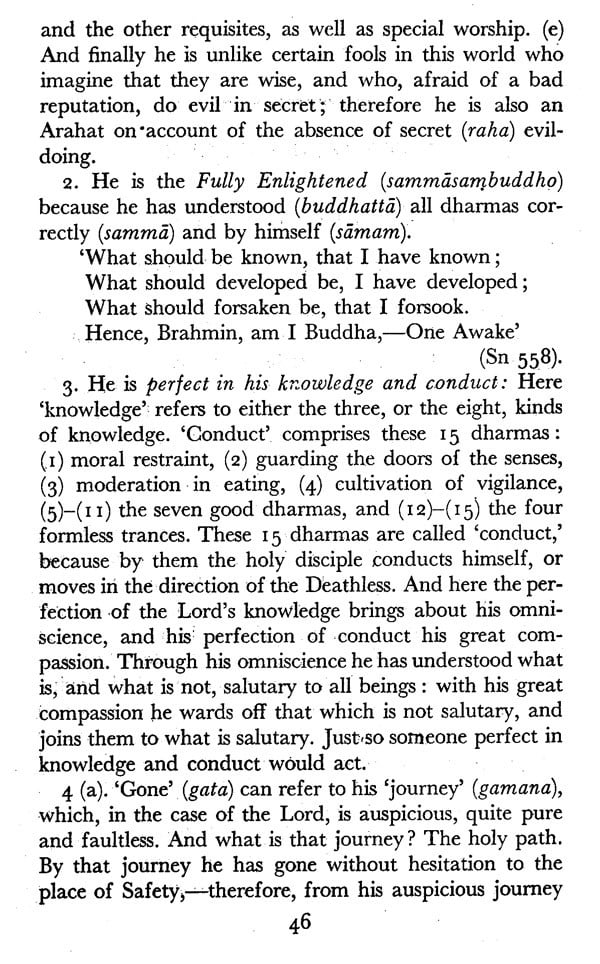 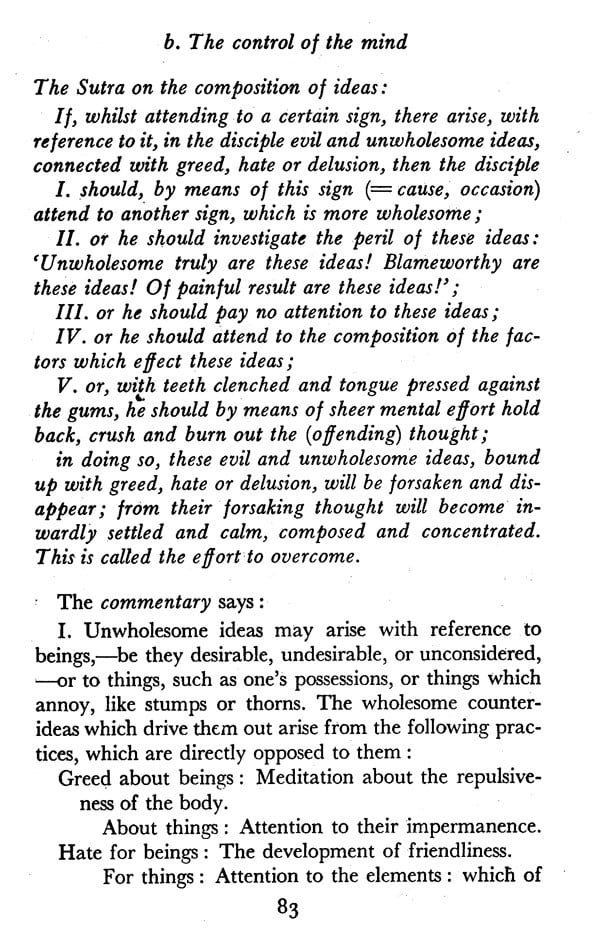 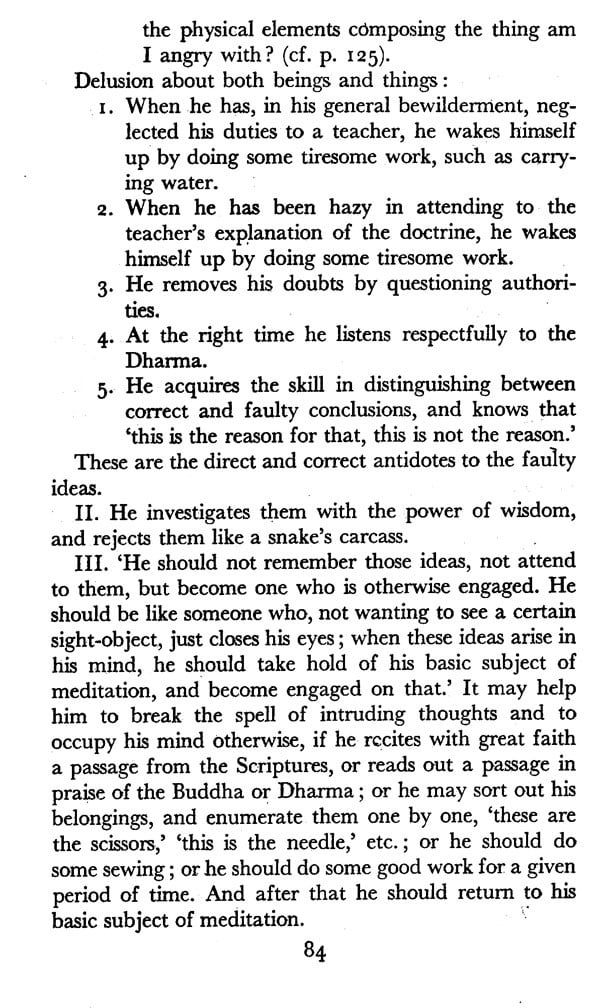 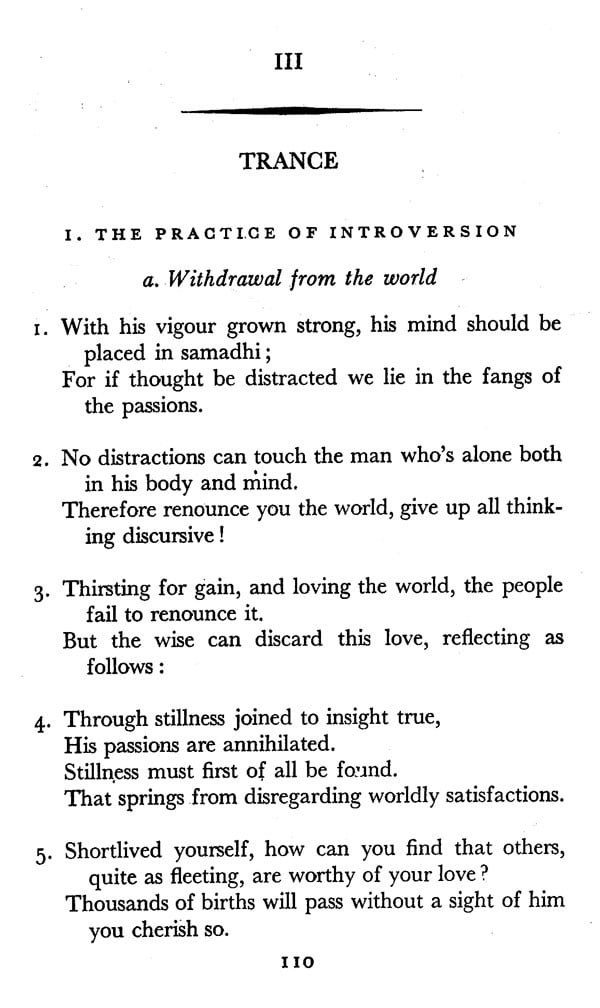 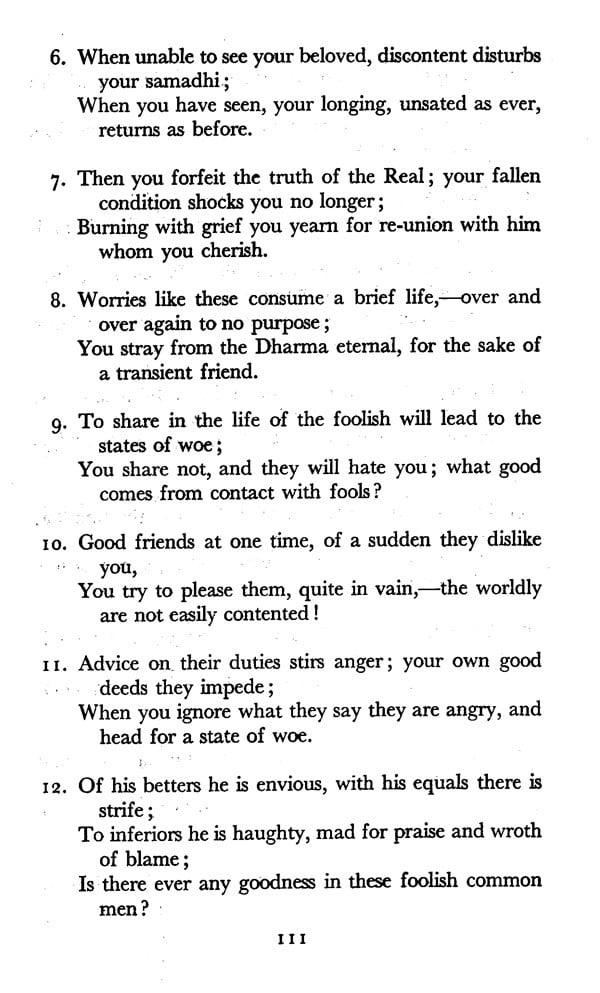 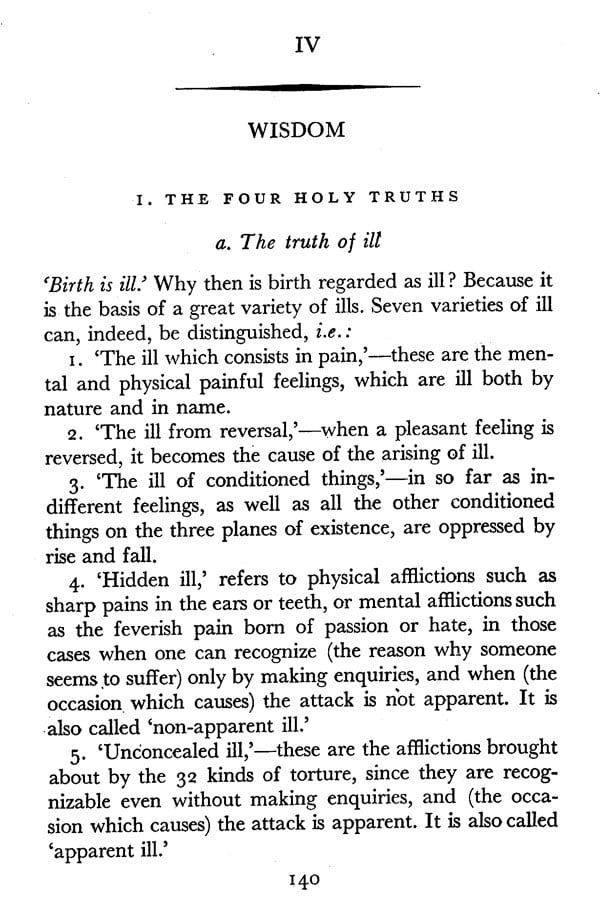 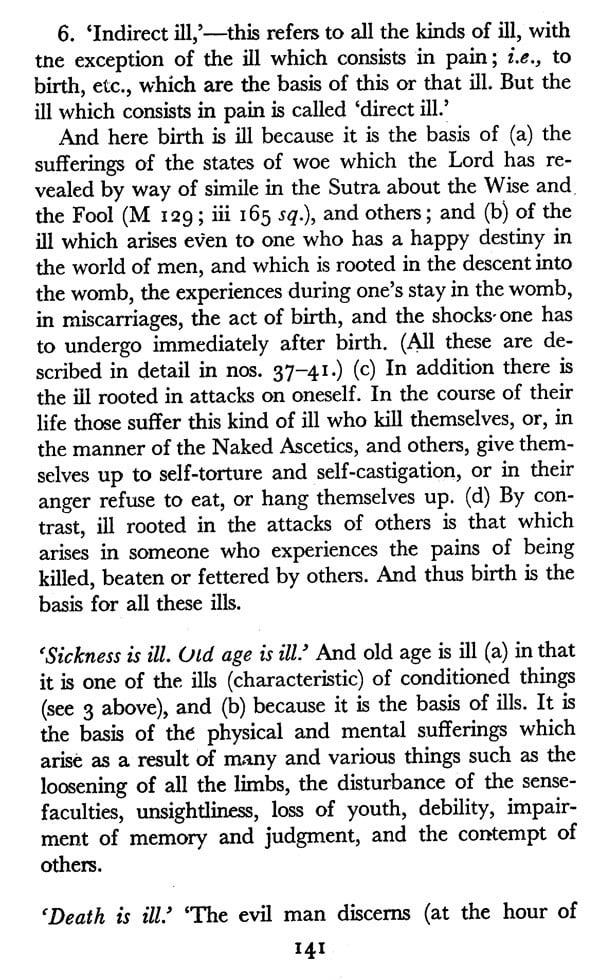