Ghalib: A Hundred Moods: a selection of 100 couplets of the greatest of Urdu poets, neither represents his best nor is it according to any particular theme. 'And yet, this selection is unique-for, as the reader can see, each of the couplets has been translated into stone. This has been made possible by Brijendra Sayal who has spent a lifetime not only in collecting these stone specimens but chiselling them into a fineness where they reflect the essence of Ghalib.

The English translation of the couplets included in the volume has been accomplished by Dr. O.P. Kejariwal, Nehru Fellow, and a historian of repute. Dr. Vimlesh Kanti Verma of the DAV College, Delhi, has done the phonetic transcription of the couplets.

Artists like Chughtai and Sadiqain have made Ghalib's poetry the subject of their paintings but here, for the first time, Ghalib has been portrayed through stone. In this sense, the book is unique.

Brijendra Sayal was born in 1920 in the Gujaranwala district, now in Pakistan. He matriculated with distinction and graduated from the Punjab University, Lahore, with Honours in Persian. He joined the Indian Army in 1941 and served till 1975 when he retired as Captain from the Army Education Corps. Sayal has always been interested in Urdu and Persian and several of his poems have been published in various magazines. Ghalib, however, has all along been his favourite in fact, his obsession as the stone pieces reproduced here bear witness.

Brijendra Sayal now lives in Delhi with his daughter. His work has been widely acclaimed by the Press and he has been honoured by different organisations. Some of his sculptured pieces are kept in the Ghalib Academy, New Delhi, and the Raza Library at Rampur is preparing a suitable section for display of his masterpieces.

Ghalib : a Hundred Moods - a selection of one hundred couplets of the great poet, certainly does not represent his best, nor is it based on any particular theme. And yet, the selection is unique-for each of the couplets selected has been, as the reader can see, translated into stone.

This has been made possible by Brijendra Sayal, who has so chiselled each of these stone pieces, painstakingly collected over the years, as to convey the essence of the couplets of Ghalib.

Sayal, has a collection of over four hundred such pieces. At our request, he made a selection of what he considered his hundred best. The English translation of the couplets has been accomplished by Dr. O.P. Kejariwal, a Nehru Fellow and a historian of repute. It was not a voluntary task for him. When we went through all the important published translations of Ghalib, it was felt that we could do with a fresh one, and on seeing Dr. Kejariwal's translation of a couple of those selected, we persuaded him to do the rest. We are indeed glad that he undertook the difficult task.

Our acknowledgements are due also to Dr. Vimlesh Kanti Verma, Reader, P.G. D.A.Y. College Delhi for giving a phonetic transcription of the couplets.

Hari Om Mehra, Staff Photographer of the Division, photographed the stone pieces and got the transparencies prepared. Credit for the layout and cover design goes to Asha Saxena.

The combined efforts of Abrar Rahmani, Assistant Editor; D.N. Gandhi, Joint Director; and S. Roy, Production Officer, went into getting the book published in time. Our special thanks are also due to Aiwan-e-Ghalib and Ghalib Academy for their valuable assistance in its preparation.

For each one of us involved with the project, the task has been one of pleasure because of the main spirit behind this book-Mirza Asadullah Khan known to all as 'Ghalib'. Perhaps the greatest, and certainly the most popular of Urdu poets, Ghalib was born on 27 December 1797 at Agra. Having lost his father Abdullah Beg at an early age, Ghalib was brought up by his uncle Nasrullah Beg, who too died early. Notwithstanding an informal and irregular education, Ghalib matured early. It is said that his true mentor was Maulana Abdus Samad Hormzud, who had come from Iran and stayed in Ghalib's house for nearly two years, with the young Ghalib as his pupil. Although it is difficult to say when exactly Ghalib started writing poetry (probably when he was eight or nine), it is indeed astonishing to note that he had completed his major work-Diwan-e-Urdu (first published in 1841) before he turned nineteen.

It was about this time that he shifted his interests from Urdu to Persian, an interest to which he would return only some thirty years later. And when he did so his poetry was no better or no worse than his earlier works.

The corpus of his Persian writings includes mainly collections of letters and the first volume of the two-volumed history of the Taimur dynasty, for which he was commissioned by the then Emperor, Bahadur Shah Zafar himself, on a monthly salary of Rs. 50/-. It is an indifferent work interrupted partly by Ghalib's own lack of interest and partly by the events of 1857.

In a way, Ghalib was fortunate. In a span of 72 years (1797-1869), he lived through an eventful period of Indian history: the decline of the Mughals, the rise of the British Empire, its zenith and the first widespread resentment and uprising against it. He himself escaped unscathed during the revolt but was witness to the large number of hangings which followed it. Having seen "it all"he was to ruminate later:

This world is a child's play
It unfolds its drama
Night and day.
From where I stand
I see it all
It goes on
On and on.


Ghalib's life was an eventful one, mirroring the turbulent times in which he lived. Fond of the good things of life, he struggled throughout his life to attain the means to afford them. His mainstay was the pension he received from the British Government on behalf of his deceased uncle, NasruIlah Khan. Then, because of the machinations of his relatives, the Government reduced the pension to half. Ghalib, alleging forgery, struggled to have this restored, petitioning the Court of Directors of the East India Company in London and, finally, Queen Victoria herself. He was successful only in 1860, but was so deep in debt by then that whatever he received by way of arrears was all used to pay off his debts.

Though plagued by financial worries for most of his adult life, Ghalib seldom let this come in the way of his hedonistic attitude to life. Incidents in Ghalib's life have become the stuff of legends as in the case of no other Urdu poet. So also his poetry, which is the stuff of many a conversation and which has been on the lips of people, generation after generation. He is indeed the most quoted poet in Urdu.

And this is what gives him a special place in history, in literature and in popular imagination. Ghalib had many drawbacks of human character: he drank and gambled. Almost all his life he was deep in debt. Given these and many other failings, Ghalib's name might well have sunk into obscurity, if not clouded by notoriety, but it is redeemed by his poetry. We remember him today, not for his frailties, but for his poetry which is sublime-as we hope this unique volume will bear out. 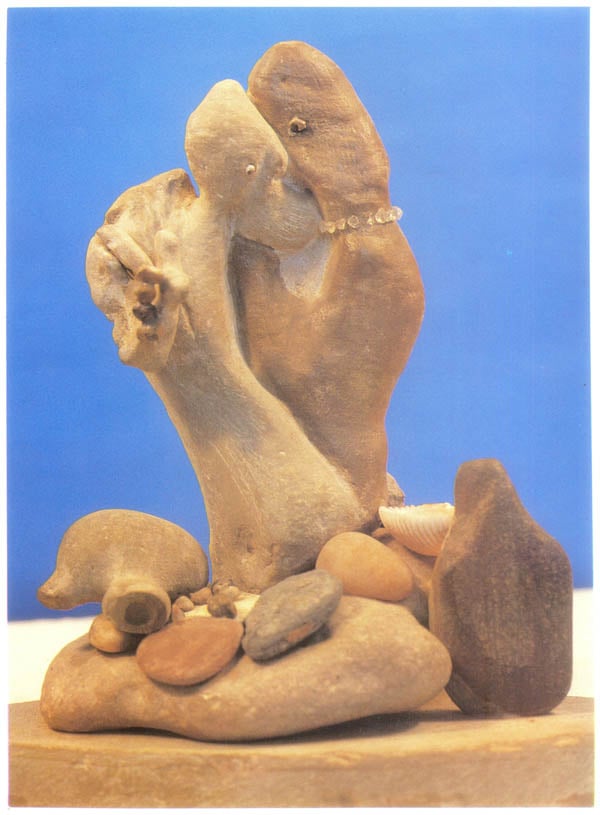 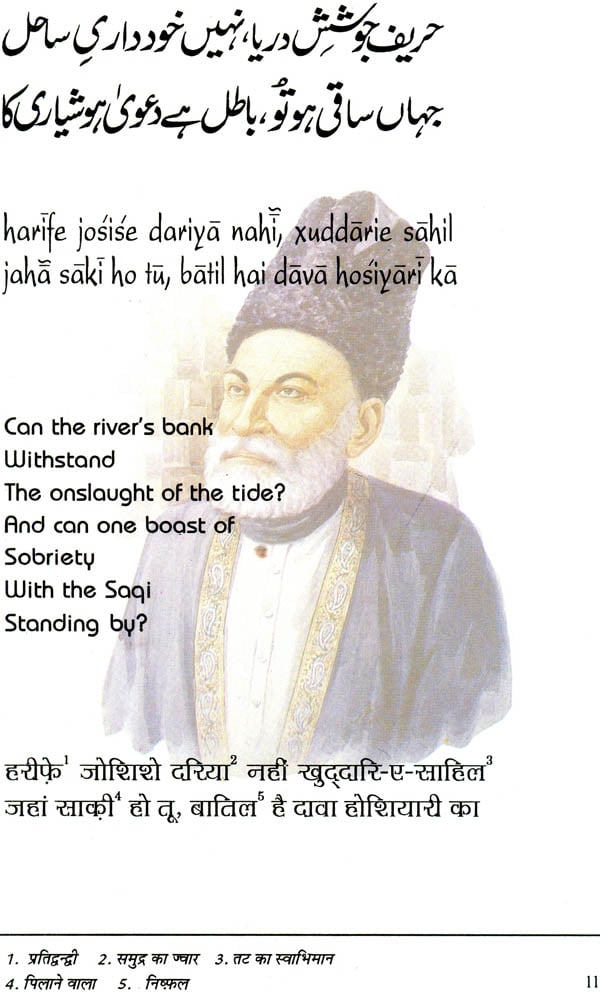 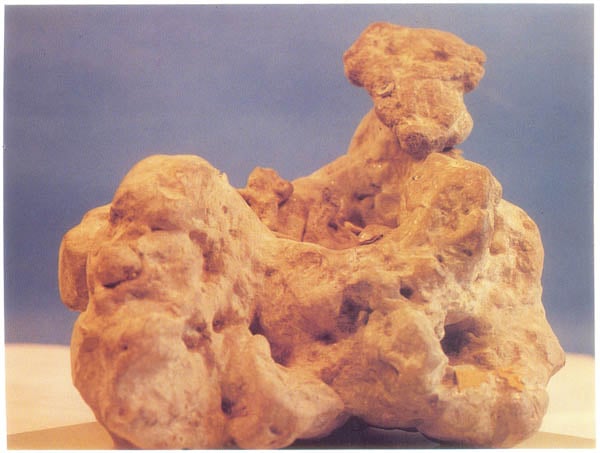 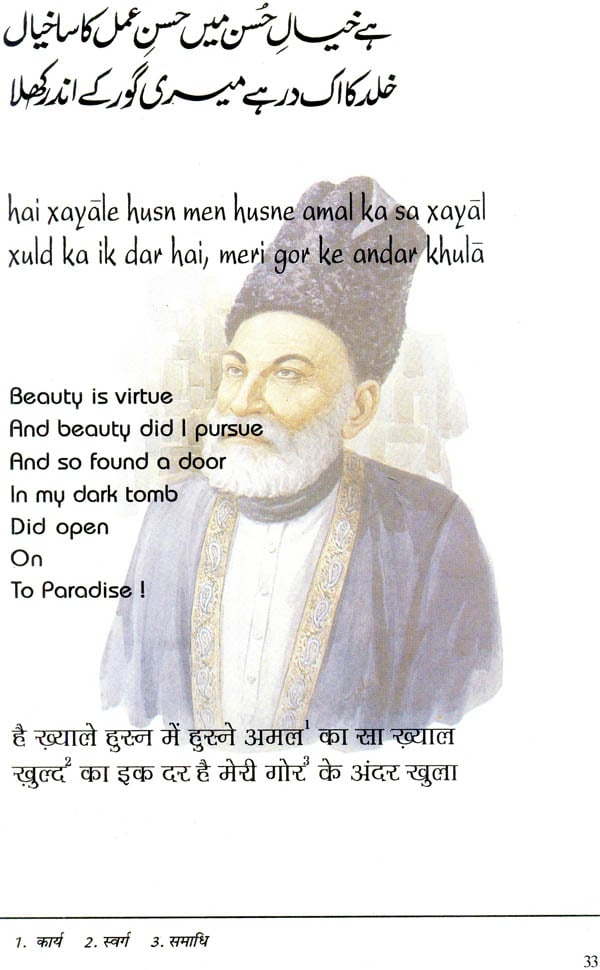 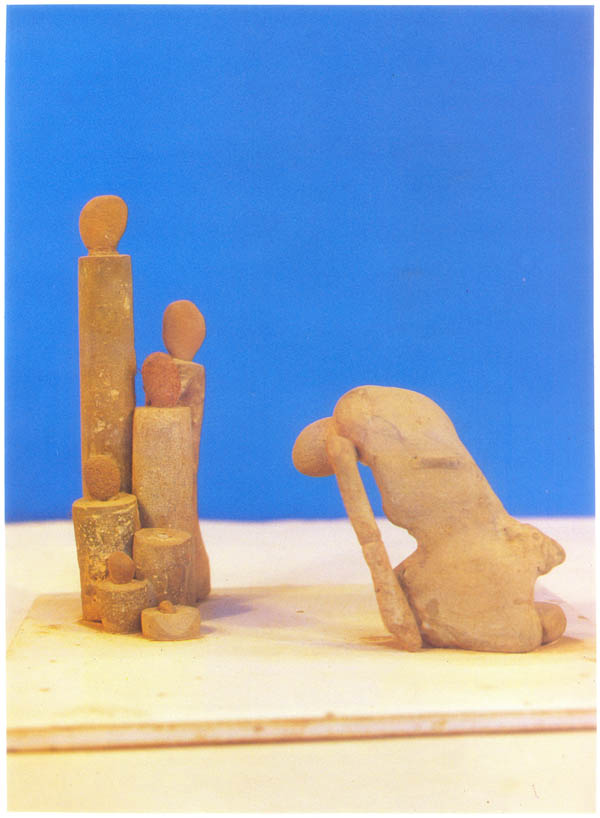 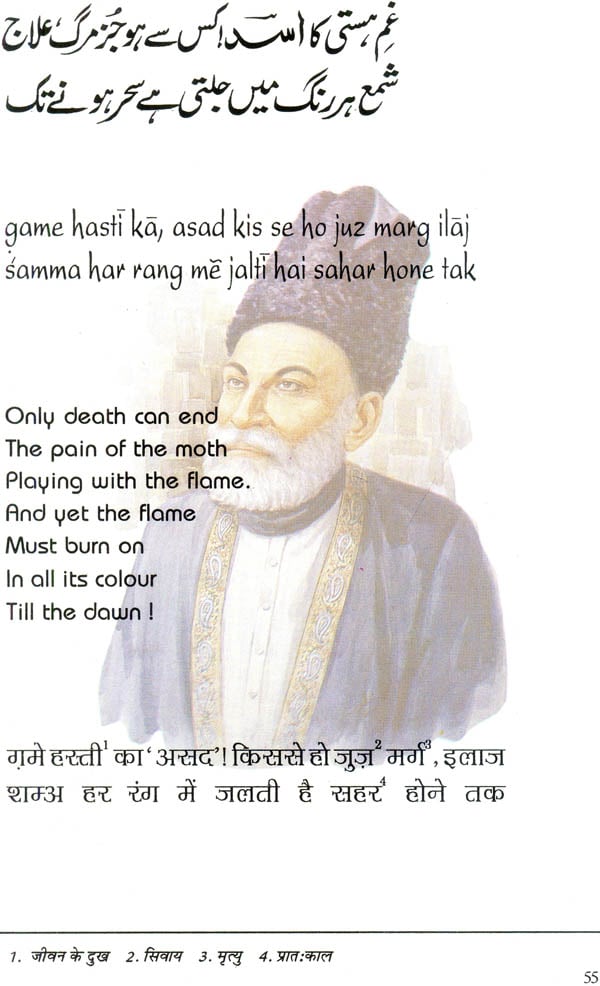 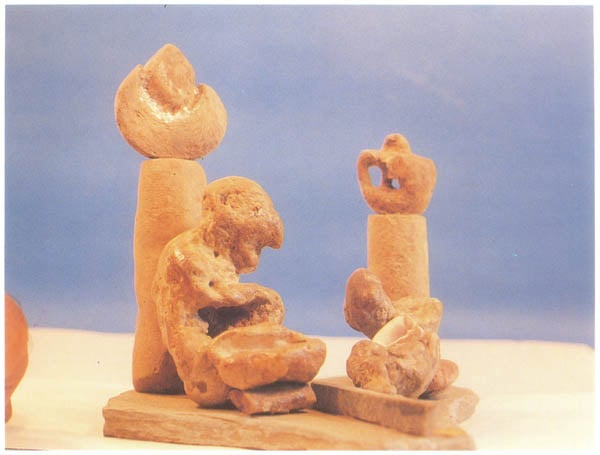 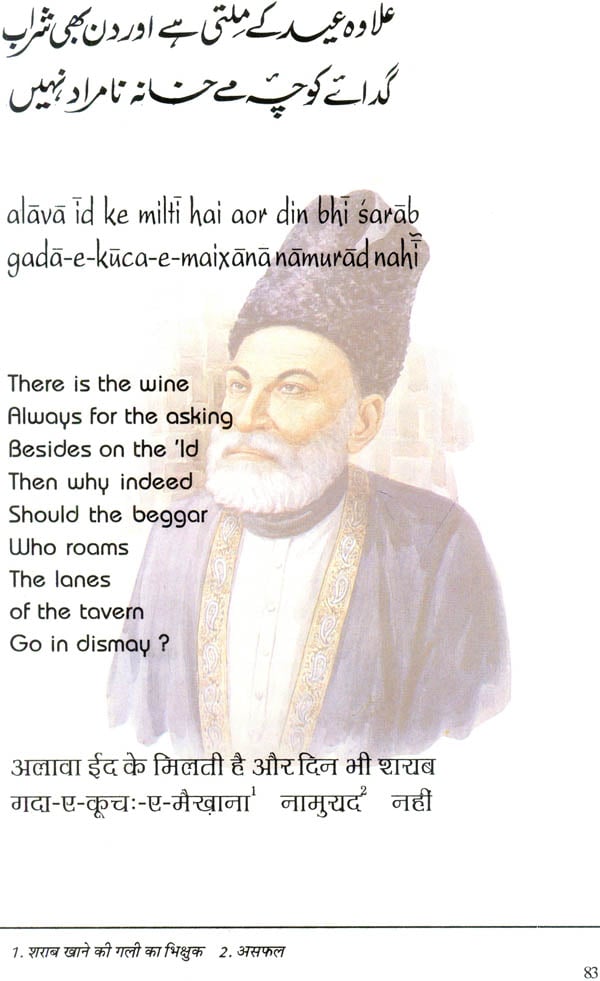 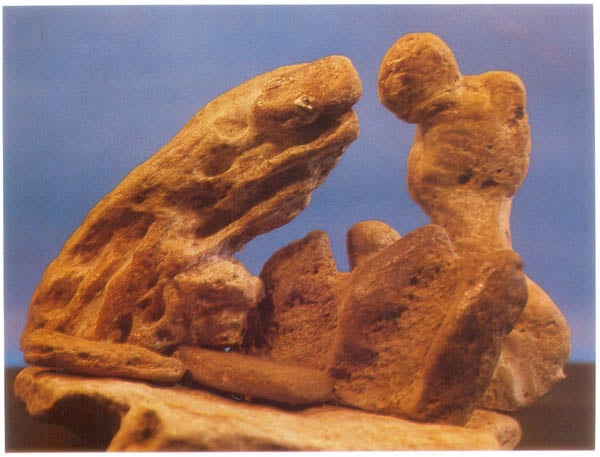 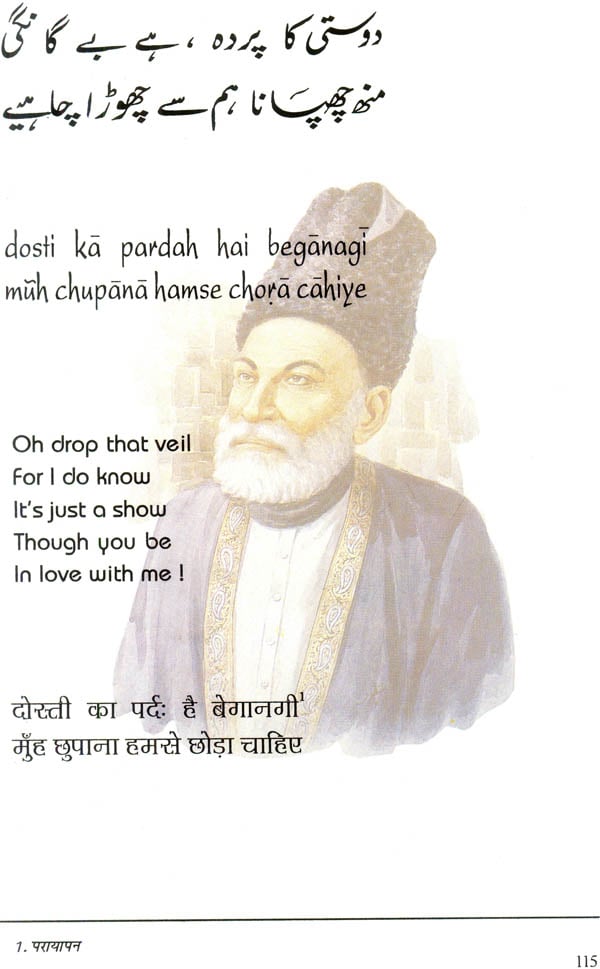 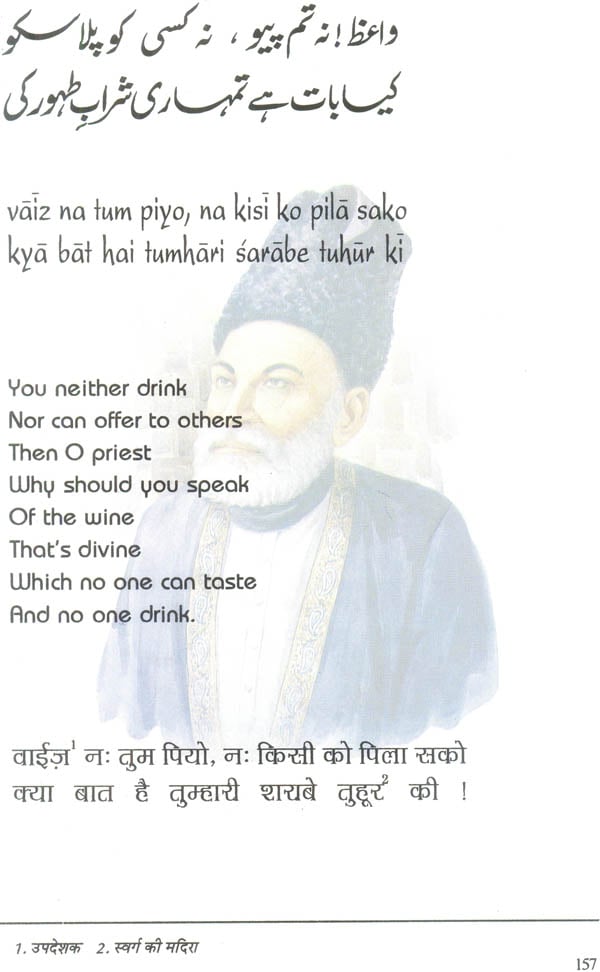 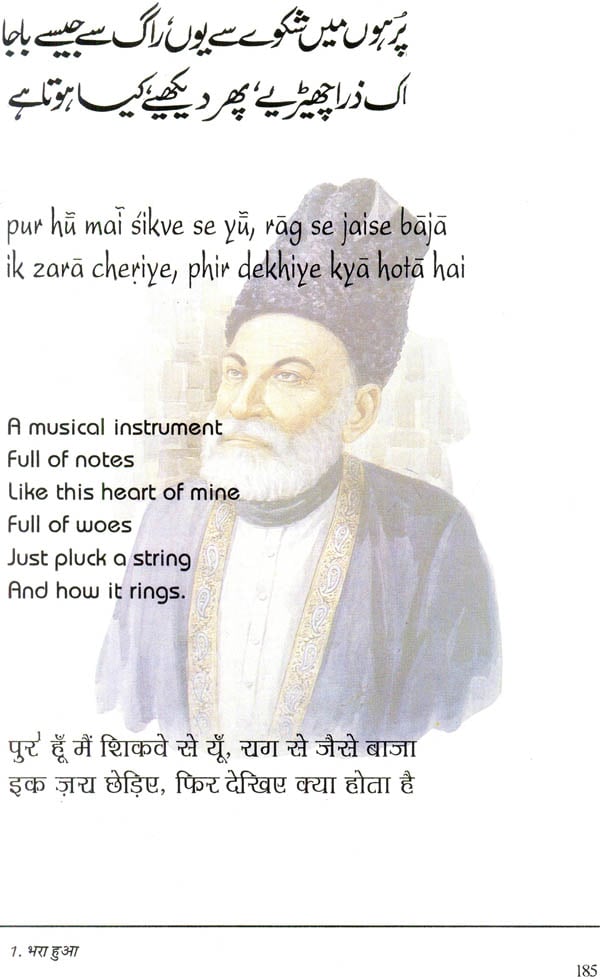