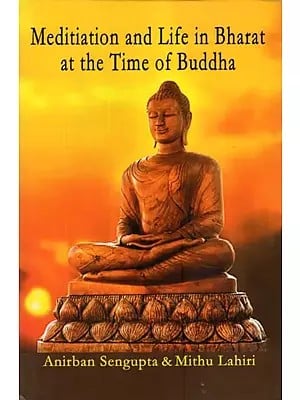 Meditiation and Life in Bharat at The Time of Buddha

is now a well-known name in the realm of Indological studies. He has published works in various fields of Indology like the Epics, Arthasastra etc. He has special interest in the doctrine of Bhagaban Buddha and its applications. He has presented original research-papers at various national and international conferences.

currently a Ph.D scholar, is a bright student of the University of Calcutta. She has also attended several conferences in India and abroad and her papers achieved considerable admiration in the academic circle.

As an ardent fan of Bhagaban Buddha from my very boyhood, I was fascinated by His biography, His mission and His message towards the suffering humanity. My late beloved father Prof. Anil Kumar Sengupta (renowned as "AGNIMITRA" -the famous Bengali author & dramatist); being a great admirer of Bhagaban Buddha -infused the love and devotion within me.

Much later, on completion of the course of Pali from the University of Calcutta, I was spellbound on my gradual discovery of a new realm. I felt that there are many unexplored angles of His doctrine. In the introduction, we have stated that the relation and interaction between the doctrine of Buddha and the classical Vedic doctrine always presented a topic of keen interest to us. Besides, my realization was that in the present global context-there are ample scopes of application of His preachings.

I initiated my research-works on these topics in the year 2016, but I was unable to proceed individually. In the year 2017, at the ISBS annual conference at Sanchi, I met Smt Mithu Lahiri, the co-author of this book. Astonishingly we found that our thoughts, concerning Buddhism have much in common. Hence, I offered her to collaborate with me, This book is the outcome of our joint efforts till the close of 2019.

I must express my heart-felt gratitude to PANDIT SOLANKI PRACHYAVIDYAMANDIR of M.P, because without their active financial support, the publication of this book was hardly possible. The PSPVM, within their limited means, is trying their level best for last fifteen years to reveal the true history & heritage of Bharatvarsha as well as to uphold & augment Her glory.

I must convey my sincerest thanks to Sri D.L.S Jayawardana and his able son Sri Jayadewa Jayawardana of Maha Bodhi Book Agency. Their co-operation has enabled the successful launching of this book. Along with them, I like to extend my thanks to the employees of printing press and binding works.

To anyone engaged in the study of history, heritage & culture of Bharatvarsha-the 6th century B.C. will be a topic of profound interest. An epoch-making period which witnessed the emergence of Bhagaban Buddha; the Light of the world, along with other distinguished religious leaders like lord Mahavira & many other non-Vedic sects. A period of religious turmoil, in reality, it threw severe challenge to the traditional Vedic doctrine. Among the non-Vedic ways, the doctrine of Lord Buddha, in the long run, proved to be the greatest & the most long-lasting challenge to the prevalent Vedic philosophy.

In this context, we should have a little discussion about the definition of religion, its nature & evolution and a comparative study of that with the Dharma' of Indian concept. There are several established definitions of religion, as following.

(a) The belief in and worship of a superhuman controlling power, especially a personal god or a set of gods.

(b) A particular system of faith and worship.

(c) A system of beliefs, which is supposed to provide solutions for day-to-day problems enjoined with the answer to the quaries related to a life above the mundane material one. The solutions are supposed to be delivered from the supernatural realm.

From the above discussions, it is evident that religion is a social phenomenon. Like every other social process, it is a dynamic one i.e., it undergoes changes from time to time. Though we are using the word ‘social'-in reality, the concept of religion was germinated long before the actual formation of human society. The anthropologists have proved that even, the paleolithic cave-dwellers had some 'faiths,' though of very primitive nature compared to the modern organised religions.

At the dawn of the human civilisation, the inner structure of the then 'religions' were quite simple. Those were comprised of certain practices of worshipping the unseen 'spirits' and those practices should be categorised under the broad term 'cults' rather than being marked as 'religions.' The core of the cults was pivotted on some psychological elements connected with the helplessness & fear of the primitive men. The pre-historic people were utterly helpless in front of the natural forces and the diseases.

They considered that there must be some 'spirits' behind those dangers. So, the primitive men decided to propitiate those forces. In this way, specifically the practice of animal sacrifice came into existence-a practice being continued till date. Afterwards, around 3500-3000 B.C, mankind entered into the metal age. By then, the people were no more nomads-They had attained a certain level of economic stability. The bronze age, the initial period of the chalcolithic era witnessed the inception of more & more economic activities-developments of urban settlements, introduction of currency, emergence of various other professions than ploughmen & pastor e.g., soldier, potter, metal worker etc & consequently emerged trade & commerce, giving birth to the merchant class. With the elevated standard of living, new vistas of thinking were started among the intelligent fellows. They initiated thinking about many other topics-topics beyond the daily normal life; e.g., what is life, will there be any life after demised, how this world had been created etc. In short, this period experienced the inauguration of philosophical quests. However, according to some scholars, the philosophical & spiritual enquiry of the mankind, commenced during the end period of the neolithic era. Another distinguishing feature of this period, a feature whose legacy is still being borne, was the uprising of the priests. Priesthood emerged as a seperate profession and the priestly class got its foothold as a classentity. According to the erudite scholars of anthropology & ancient History like Fraser, Gordon Child etc-in the paleolithic period, there arose the primitive magics of casting spell over wild animals & 'evil spirits' etc. In every clan, a particular person was entrusted with those tasks and he became the reverred witch-doctor. The tradition continued, rather became stronger in the neolithic era, as the witch-doctors became instrumental for appeasing the divine powers to ensure the well-being of the whole community. Thus, with the elapse of time, the primitive witch-doctors were gradually Converted to priests. In the chalcolithic era, the newly born priests made themselves much more consolidated and started to take over the dominating position in the society.

When we enter the arena of history from the shadowy period of pre-history, we observe another remarkable feature - the emergence of the rulers as another powerful group. It is highly possible that the practice of designating a specific person or a group of a few selected competent persons to guide the clan in the earthly issues, commenced in a remote past, may be during the paleolithic era. While the Neolithic era was approaching to its end, the tribal chieftains more or less consolidated their position-a position claiming awe & procuring material benefits from the other members of the clan. In this way, 'kingship was born. To serve the common interests of dominating the people, the two powerful groups, the priests & the kings joined hand in hand-there was born an unholy mexus. The ancient summerian & Egyptian civilisations were perhaps the best examples of such alliances.