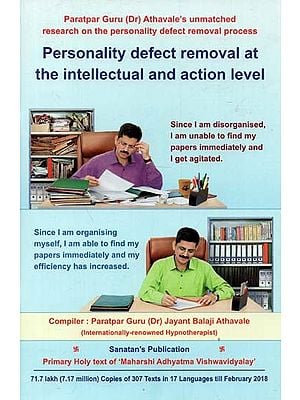 Personality Fefect Removal At The Intellectual and Action Level

23 years in business
Introduction to the Compiler

1. An Internationally renowned Hypnotherapist
2. Established 'Sanatan Sanstha' to propagate Spirituality
3. Propounder of 'Gurukrupayoga' for faster God-realisation : By performing spiritual practice as per 'Gurukrupayoga', 77 seekers have become Saints till 12.4.2018, and 1130 seekers are progressing towards Sainthood.
4. Established Ashrams like the Gurukuls of the earlier times
5. Compiler of Holy texts : Over 71.95 lakh copies of 307 Holy texts in 17 languages (11 Bharatiya and 6 foreign) have been published as of March 2018, and the matter for publishing over 8,000 Holy texts on 11,000 subjects is ready.
6. Set up a full-fledged studio to create Audio CDs, VCDs and DVDs that teach about spiritual practice and Hindu Dharma
7. Established 'Maharshi Adhyatma Vishwavidyalay' to teach the 14 Vidyas and 64 Kalas from a spiritual perspective
8. Conducting research on methods to overcome physical, mental and negative energy distress
9. Conducting research on the Divine changes in His body, the objects used by Him and the Mahamrutyuyoga faced by Him
10. Conducting research on the Divine changes taking place in the premises where He resides
11. Conducting research on presenting Art in a sattvik manner
12. Studying events related to Panchamahabhuta that are beyond the comprehension of the intellect by using scientific instruments
13. Preserving spiritual objects for the 'Spiritual Museum'
14. Studying the sattvikata of plants and animals
15. Identifying sattvik (Divine) children and conducting a research on their qualities
16. Conducting research through Astrology and Nadi-jyotish
17. Teaching Kshatradharma sadhana
18. Started the `Sanatan Prabhat' Periodicals
19. Conceptualizer of the 'Hindu Varta' News Channel on the internet
20. Uniting and guiding Saints, sects, devout Hindus, patriots and social workers on how to establish the 'Hindu Nation'
21. Some organisations drawing inspiration from Paratpar Guru (Dr) Athavale
21A. 'Hindu Janajagruti Samiti' for establishing the 'Hindu Nation'
21B. Sanatan seeker-priest school
21C. Balsanskar.com
21D. Hindu Vidhidnya Parishad - An organisation of Advocates
21E. Sanatan Adhyayan Kendra' for providing intellectual assistance to speakers & spokespersons of Hindu organizations
21F. Spiritual Science Research Foundation - For teaching Spirituality scientifically to the entire human race

Combined Preface on this Subject

'Every jiva, right from an Amoeba to the evolved human being, tries to obtain happiness that is - supreme and everlasting. The experience of happiness and sorrow arises from the mind. Therefore, while making efforts to obtain happiness and eliminate sorrows one should remember that every jiva is a fragment of the Sat-Chit-Anand (The state of Absolute Truth - Divine Knowledge - Bliss) God. It is present inside me as well, then why am I unable to get its spiritual experience? To develop this ability, what are the changes I should make within myself? With this goal in mind, it becomes essential to have keen observation ability. This is called 'achieving introversion'.

The bright light of a lantern can shine forth only when the soot that has collected on its glass is cleaned. Similarly, by eliminating the covering of Raja-Tama components that have formed due to our defects, we can get the spiritual experience of the Sat-Chit-Anand form of God within us.

It is necessary for everyone to record the changes taking place in their personality defects till the state of Sat-Chit-Anand is achieved. Therefore, the process of achieving introversion should not be limited to a particular period of the day but should be continuous, that is, it should become a part of our natural existence. When implementing the PDR process, if efforts are made throughout the day to compliment the actions performed through the body-speech-mind by being introverted, the process will become effective and will help in maintaining the introverted state.

'After studying this Holy text let the effectiveness of the PDR process in the readers increase and let them be able to experience the state of Sat-Chit-Anand - this is our prayer at the Holy feet of Shri Guru. - Compiler 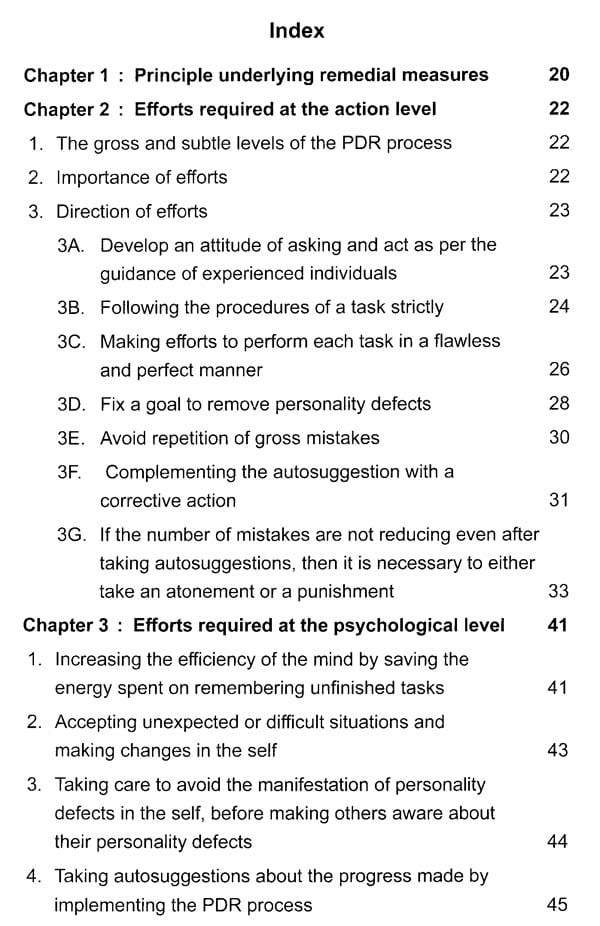 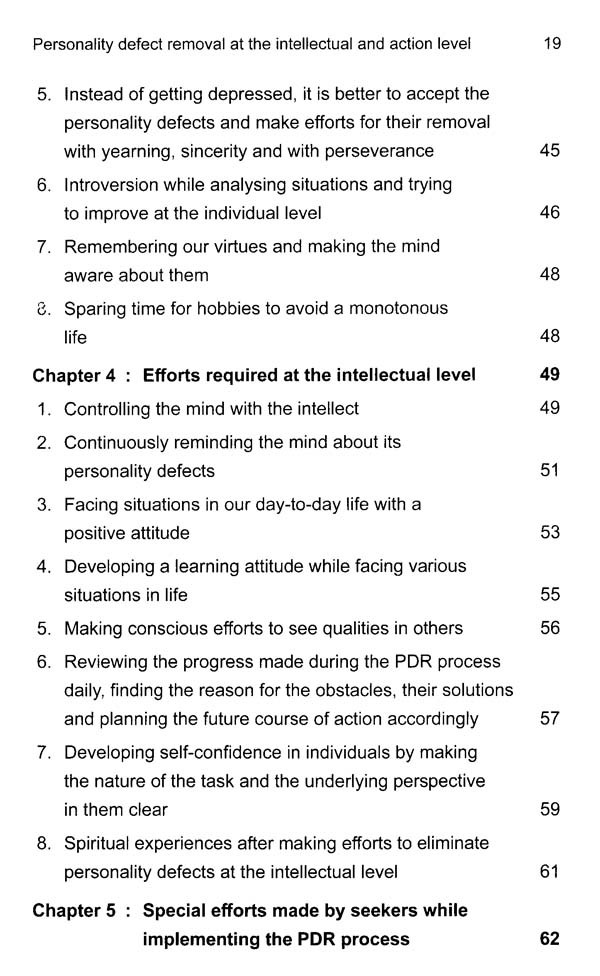 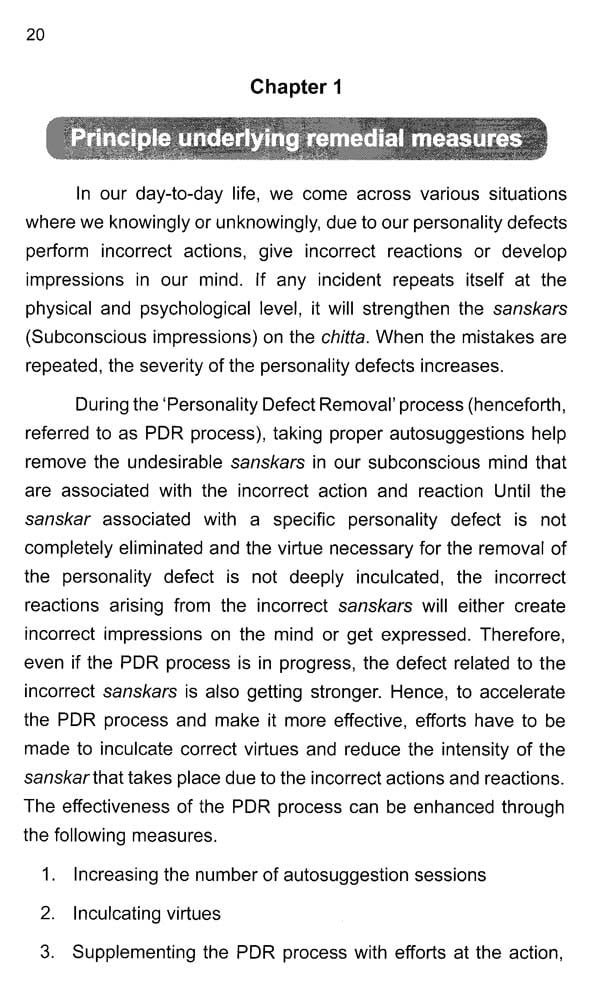 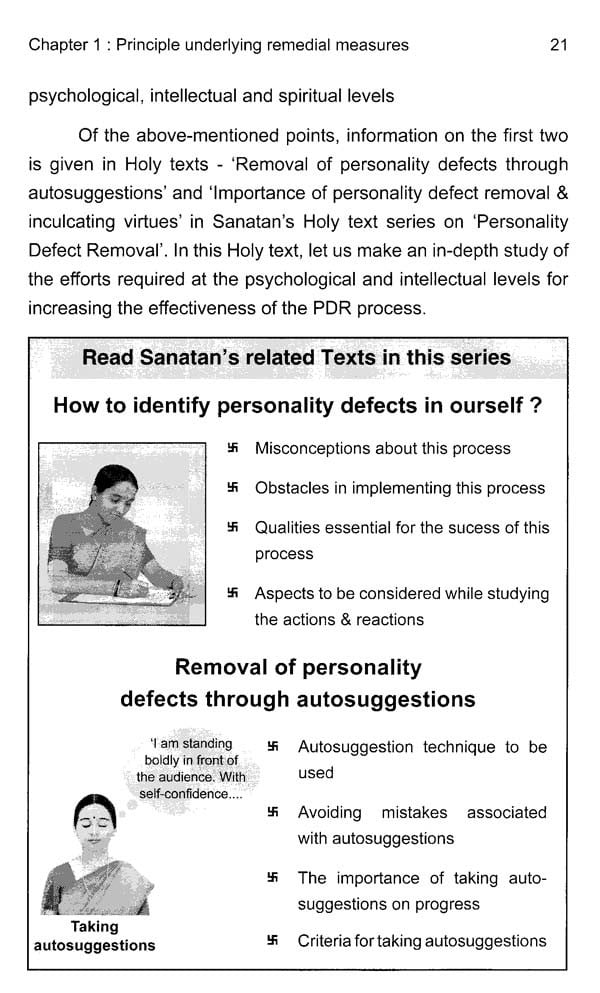 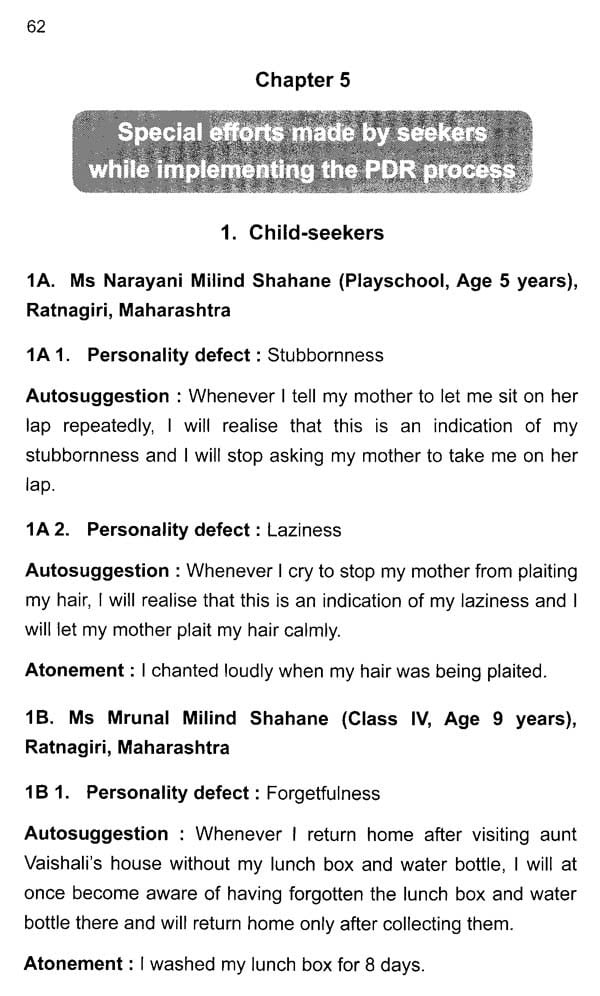 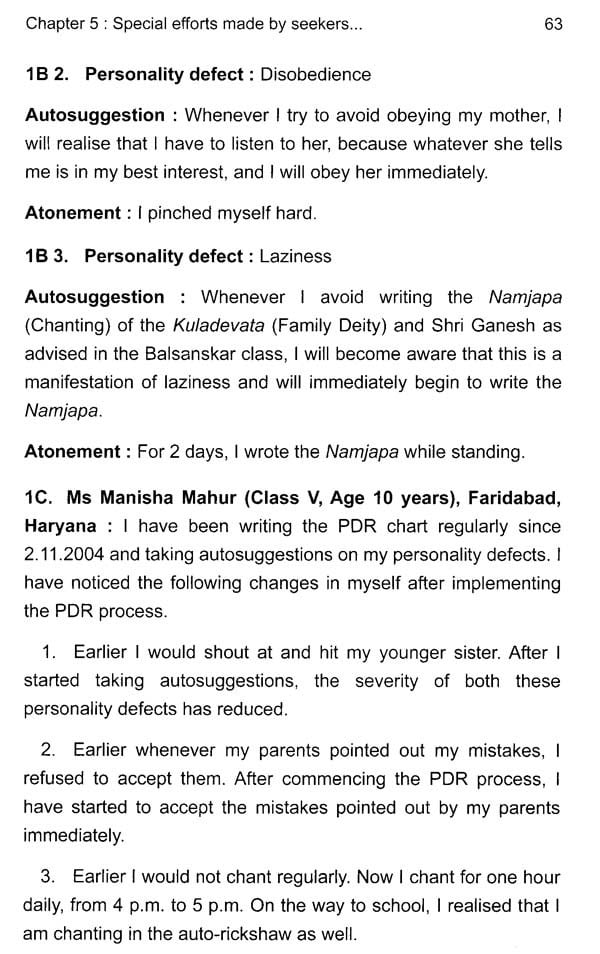